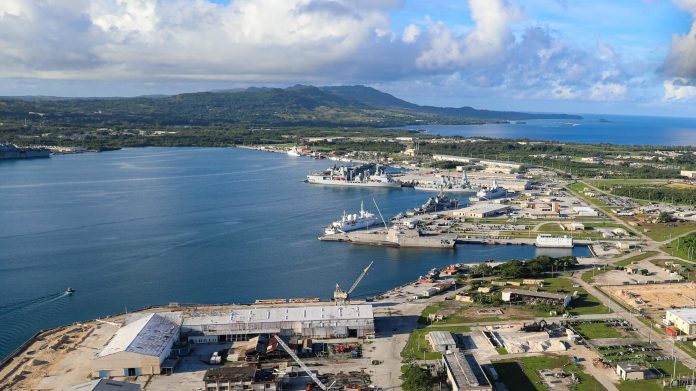 Since Russia’s invasion of Ukraine, all eyes in the Pacific have been on President Xi Jingping, worried the Chinese leader might take the opportunity to strike out against Taiwan. If so, the US territory of Guam could find itself in Chinese crosshairs as well, long before the island’s missile defenses have been upgraded as promised. In the op-ed below, the Heritage Foundation’s Brent Sadler urges the US to find an interim solution, potentially using older warships.

The Pentagon recently announced plans to strengthen missile defenses on Guam in 2028. While the decision represents progress, there’s a problem: The defenses may arrive too late to protect the island from China. Experts have repeatedly warned that, in a war over Taiwan, Beijing would almost certainly attack this strategically important US territory, and China could make its move within the next five years.

In a March 2021 congressional hearing, Admiral Philip Davidson, the previous Indo-Pacific Commander, testified that China is making preparations for a military confrontation by 2027. Shortly thereafter, the current Indo-Pacific commander, Admiral John Aquilino, assessed that while he didn’t have a specific timeline, “this problem is much closer to us than most think.” Mike Pompeo, who served as director of the CIA and later as secretary of state, reiterated the danger during a March 2022 public event hosted at the Heritage Foundation, concurring that Davidson’s logic was sound.

Judging by its design requirements, the US Missile Defense Agency plans to rely heavily on the Aegis weapons system. This narrows the potential providers of the system to Lockheed Martin as the only firm with the technical experience with that particular system. Contractual obligations aside, as a practical matter the company will have to deliver on any contracted promises to defend Guam by 2027, when the danger of a Chinese military confrontation is believed greatest.

The latest plan envisions an array of fixed and road-mobile sensors and weapons to provide the type of defense commanders have been arguing for since 2013 to provide the necessary 360-degree coverage for the island. Once realized, the plan would add 42 mobile platforms employing interceptor missiles (SM-3 and SM-6) with Army missile defenses (THAAD and Patriot systems) to counter incoming air, ballistic, and cruise missiles.

Despite a decade of efforts to adequately defend Guam, only in the last year has a concerted effort began to integrate Army and Navy systems in the so-called Joint Track Management Capabilities bridge. In fact, the Missile Defense Agency’s director, Vice Admiral Jon Hill, made clear at a recent public event that this bridge and the associated command center will be critical.

Yet nothing that’s been proposed would bolster Guam’s current missile defenses. Those defenses consist of a decentralized combination of an Army THAAD system and deployed Navy ballistic missile defense-capable cruisers and destroyers. Given the Navy’s limited number of ships, it has long been a priority to free those ships for anti-submarine patrols and air defense of carrier strike groups — a growing mission for destroyers as the aging Ticonderoga-class cruisers retire.

Interestingly, those same cruisers have a proven capacity for command and control of complex area air and missile defense. The ships have little remaining life, yet they offer an opportunity to quickly serve as the Guam missile defense command and control node that Indo-Pacific commanders have been seeking. They can also serve as a mobile sea-based testbed for proving the new systems.

That last point — sea-based — is important. Any future land-based system for Guam will have to go through a lengthy environmental impact study which will take into consideration how the island’s roads and dense population centers impact the system’s employment. Having a floating testbed at Guam allows for engineering development as these lengthy reviews progress.

With a major war raging in Europe and looming prospects of great power conflict in Asia, the time for action is now. The defense of Guam — home to 168,000 Americans and the hub of American military efforts in the Pacific — must be a priority today. Repurposing aging cruisers for its defense can assist in this, while accelerating the development of future, more capable defenses being proposed by the Missile Defense Agency.

Brent D. Sadler is the senior fellow for naval warfare and advanced technology in The Heritage Foundation’s Center for National Defense.

The Civil War Battle of Gettysburg, in 1863.

The Best People To Be Friends With After SHTF