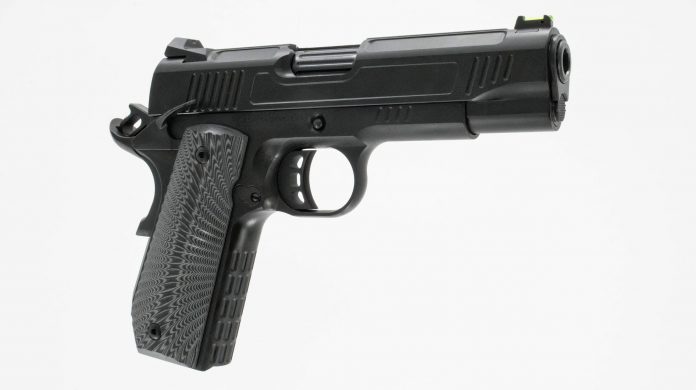 Tisas USA has been bringing in some high-value firearms to market lately. The Zigana PX-9 Gen 3 is an incredible striker-fired gun, but they have quite a few 1911s in their lineup as well. Having reviewed Tisas 1911s years ago, I expected good quality basic guns at an affordable price. When I saw the Bantam model listed I was at first taken back by its four-digit price tag. Can they do that? An imported pistol at that price?

Then I stopped to think about the alternatives. From anyone else, a 1911 with half the lightening cuts and style cues of the Bantam would cost double, if not more. I also took time to consider that all of those cuts cost extra machining time. That time, wear, and tear costs money, plus there’s the opportunity cost.

With that logic the Bantam appears to be a deal. Let’s take a look at what all goes into making this model 1911 different from the rest.

What attracted me most to the Bantam was the Ed Brown bobtail cut mainspring housing. I experienced this cut once before on the no-longer-imported Metro Arms Bobcut and absolutely loved it.

The rounded edge works much better for concealment and as a range gun, it conforms to palm meat instead of digging into it.

As you can see there are a lot of extra touches that put this import more in line with a high-end custom.

Weight reducing cuts that also serve as style points bring this all-metal gun down to just under 30 ounces on my scale. That’s not bad for 1911.

Given the option between 9mm and .45 ACP I committed the “heresy” of selecting an iconic American firearm design in a European caliber. Why? Ballistics.

The Bantam has a 4.25″ barrel which is longer than the standard 4″ barrel that 9mm American loads are designed for, but shorter than the 5″ barrel most .45 ACP rounds need for optimal performance. I’d rather have more muzzle energy (and capacity) than less.

I know the caliber choice will have some 1911 purists rolling their eyes as we’ve all heard that 9mm 1911s just don’t work…round geometry and blah, blah, blah. Fortunately this is now the year 2022 and the challenge of magazine design has long been figured out.

That old lore does, however, hint at a very important aspect of 1911 reliability, especially with 9mm — magazines. I’ve seen “great” 1911s choke because of bad magazines and some “ItZ jUSt gARbuJ” 1911s magically “fixed” with the use of a quality magazine. It’s a bit like 7.62x39mm ARs…you’ve got to use the right magazines.

Curious how an “affordable” fancy 9mm 1911 might run we hit the range for our standard battery of tests and this time included a smattering of various 9mm 1911 magazines I know to run well in other guns. The tests and results can be seen in our Shooting Impressions video.

I was surprised that both of the included Check-Mate magazines choked, and concerned this might be the time the internet was right about 9mm 1911s, but fortunately some of the other mags I had on hand worked fine. Viewers have since commented that their Check-Mate mags work fine, so I must have the mags meant for MAC.

While handling the pistol for the tabletop portion I noted that the slide-to-frame movement felt a little rough. The slide didn’t want to operate smoothly. By modern standard that might indicate a manufacturing fault. In the 1911 world that indicates a pistol needing some break-in.

On the range we had a few malfunctions that may have been the result of that extra friction, and as the day wore on the action got smoother. After getting the pistol home, cleaning and re-lubricating it, the action felt smoother. I think this is just one of those cases where some break-in is needed.

Another note from the range is that the trigger didn’t feel as crisp and clean as the aesthetics of the gun might lead one to expect. I have mixed feelings about this. As a carry gun there’s no issue with this trigger as it’s likely one of the safer-for-carry 1911 triggers I’ve shot. As a range and/or BBQ gun I’d want a different trigger. So, for $1,100 is this a fault or a benefit? That’s up to you.

I’m tempted to put some NATO rounds through the gun to smooth out the action and see if that doesn’t smooth out the trigger as well. If not, aftermarket trigger kits are affordable enough and easy enough to install. I know this because I did that to another Tisas model years ago.

A Tough Conclusion: $1,100 is a serious chunk of cash for most of us. If you’re looking in the 1911 market for a gun with the features comparable to the Bantam, most options start at nearly twice the price. That makes the Bantam a great value.

That said, with these savings you’re likely to experience some growing pains and a break-in period, something most modern shooters are no longer accustomed to. The slide-to-frame fitment is tight. That’s how custom 1911s used to come so they break in to smoothness as they open up over time rather than wear out into looseness.

If a carry-weight trigger isn’t your thing you’re looking at adding a couple of hundred dollars for a trigger kit which still puts you under the cost of a domestic gun with these features.

This is one of the few times when our Shooting Impressions video may not be a fair representation of how the gun would perform a few thousand rounds down the road. That’s just the nature of 1911s.

Manufacturer-Specified Features (specifications not yet available)

Reliability * * * *
Magazines and ammo selection certainly play a role with this one. I’ll have to see over time as the action smooths if the gun performs better with softer loads, as I expect.

Ergonomics * * * * *
This to me is how a 1911 should feel. The Ed Brown bobtail certainly makes it comfortable and the grip includes the most useful pathway to the magazine release I’ve ever used.

Accuracy * * * * ½
While load sensitivity seems to impact accuracy, repeatable points of impact were no problem. Mechanically this gun is capable of it. With a nicer trigger it’ll be easier to accomplish.

Concealability * * * *
If you’re thinking of carrying a 1911, this is a nice size and the Ed Brown bobtail certainly reduces that classic 1911 “point” under concealment clothing.

Overall: * * * *
This was a tough score to come to. See the article conclusion for details.

FN Herstal and Fiocchi to Supply 5.7x28mm Ammo to the U.S. Market -The Firearm Blog