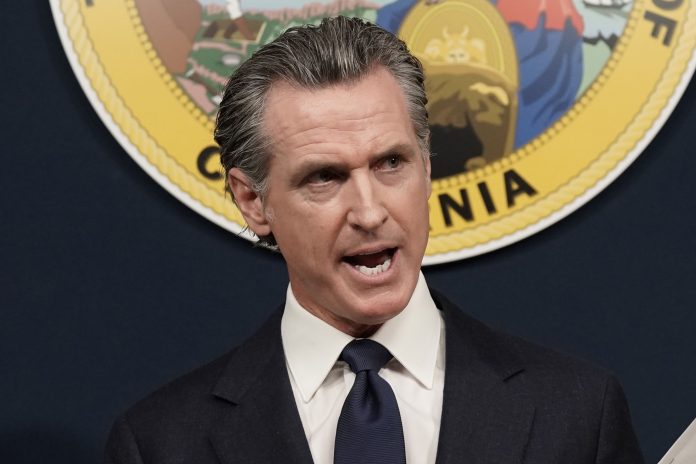 “Those who are backing this industry can no longer market to our children. The idea that we even have to do this is ridiculous,” Gov. Newsom decried on Twitter. “This law by the way goes into effect immediately. Because decent human beings, people with common sense, know that we should not be allowing this kind of disgusting marketing to go on another day.”

Gov. Newsom held a .22-caliber youth model rifle and called it a “weapon of war” while pointing it directly at the cameraman.

This is an AR-15. A weapon of war. The gun industry is openly marketing these to KIDS. With cartoons and mini JR-15s.

These don’t belong in the hands of our kids or on our streets.

What the governor and his handlers refuse to accept is his intentional and ill-conceived law is not a gun control law but is one restricting the First Amendment. Therein lies his greatest problem.

The law, AB 2571, prohibits firearm industry businesses, including gun and ammunition manufacturers, distributors, retailers and ranges, “from advertising or marketing any firearm-related product, as defined, in a manner that is designed, intended, or reasonably appears to be attractive to minors.” State authorities are the arbiters determining if an advertisement is “attractive” to minors.

“The fact that California Democrats seem to be targeting youth shooting sports specifically, if not explicitly, is evidence that this new law isn’t about reducing firearm access to youth,” Edwards wrote. That is what Gov. Newsom has in mind. It’s not about stopping criminal firearm violence. It’s not about holding criminals accountable for their crimes. It’s always been about limiting the rights of law-abiding Californians.”

Under the new law, potentially offending ads will include caricatures that “reasonably appear to be minors or cartoon characters” used to promote firearm-related products. That could be the use of images or depictions of minors in marketing materials. The law specifically forbids ads in “publications created for the purpose of reaching an audience that is predominately composed of minors.”

While the law targets youth hunting, safe and responsible firearm education and more, as much as Gov. Newsom would like it to be, it’s not about the Second Amendment. It’s about the freedom of speech First Amendment.

Now that Gov. Newsom signed this law, testimony at the state legislature in opposition to it regarding the law’s premise is more relevant.

First Amendment Scholar Professor Eugene Volokh, the Gary T. Schwartz Distinguished Professor of Law at UCLA, testified in opposition to the bill while it was being considered in the state’s legislature.

Prof. Volokh slammed the bill as an attack on Free Speech rights, saying, “I think even the bill as proposed to be amended would be unconstitutional, for three reasons: One, it would cover fully protected political speech, not just commercial advertising; Two, even as to commercial advertising, the law is unconstitutionally vague: It covers any ads that are ‘attractive to minors,’ even if they are equally attractive to legal adult buyers; and Three, the law also covers constitutionally protected commercial advertising, such as the use of caricatures of minors or cartoon characters in ads that are clearly targeted at adults who lawfully buy guns that their children could use for legal hunting or target shooting.”

There are already lawsuits filed, including by Second Amendment gun rights groups and pro-hunting youth recreational shooting organizations. Still, California Democratic Attorney General Rob Bonta, said his office will, “take any and all action under the law to defend California’s commonsense gun laws.”

What Happened to the Bushmaster ACR?