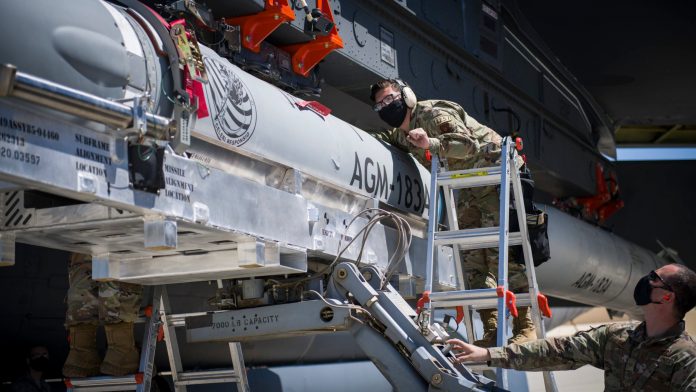 RIAT 2022: On July 12, the US Air Force logged its second successful flight test of the AGM-183A Air-launched Rapid Response Weapon — commonly known as ARRW — paving the way for the hypersonic missile to enter its final phase of testing later this year. But even if future launches are a success, the Air Force’s top acquisition official said the weapon may not become a program of record.

“We haven’t made the decision on what do we do when the current demonstration program finishes,” Andrew Hunter, the Air Force’s assistant secretary for acquisition, technology and logistics, told reporters July 16 at the Royal International Air Tattoo.

“What we’re looking at is our weapons mix and our munitions mix for our highest priority operational problem sets which are tied to the pacing threat, and that’s what’s really driving decision making,” he said. “You obviously don’t wouldn’t buy something that doesn’t work. But even if it does work, it’s got to be it’s got to be the right contribution to the overall weapons mix.”

During the July 12 test, a B-52 launched the ARRW missile, which reached hypersonic speeds, the Air Force and ARRW prime contractor Lockheed Martin said in news releases. The weapon will move into all-up-round testing later this year, where the missile is tested in its final, fully-assembled form.

The Air Force conducted its first successful ARRW launch on May 14, off the coast of southern California, following three failed tests where the missile never separated from the aircraft.

Hunter said he was “very encouraged” by the success of the recent test, contrasting the service’s previous stumbles in developing a hypersonic weapon with ARRW, which will hopefully result in the demonstration of a hypersonic missile that can readily be fielded and produced — if the Air Force decides to move to a program of record, that is.

If the Air Force decides to approve production of ARRW, it would become the Defense Department’s first operational hypersonic air-to-air missile. However, Air Force Secretary Frank Kendall has previously expressed skepticism about whether the weapon is the right fit to meet the service’s requirements.

“The target set that we would want to address, and why hypersonics are the most cost effective weapons for the US, I think it’s still, to me, somewhat of a question mark,” the secretary said in September. “I haven’t seen all the analysis that’s been done to justify the current program.”

During a Senate Armed Services Committee hearing in May, before the first successful test of ARRW, Kendall also expressed caution about the weapon, noting “ARRW, I think you know, has had a series of test failures … We have to have success before we can move forward to production. There are, I think, two tests that are planned over the next several months. That will give us a better indication of where we are in the program.”

Hunter’s comments hammer home that, even with successful flight tests on the books, the weapon could face an uphill battle for procurement funding in the fiscal 2024 budget set to be released next year.

How To Freeze Dry Bananas: Instructions Plus Tips

Orlando Woman Fatally Shoots Intruder: ‘I had to do what I had to do’