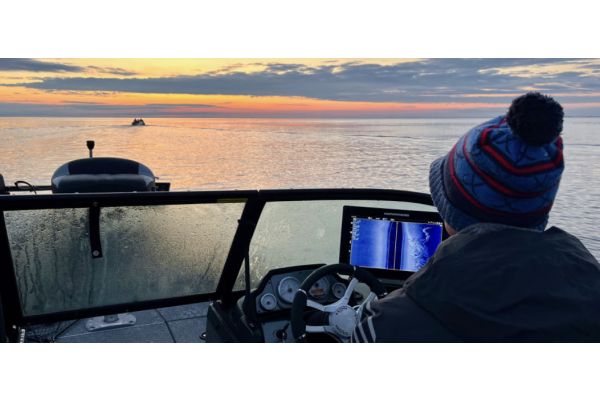 “Put your money where your mount is.”

More than a slogan, that’s the guiding principle at Trophy Graph Systems, innovative fabricator of ultra-sturdy, ergonomic mounts for today’s modern marine electronics and the harsh environs they visit.

While anglers line up to shell out thousands of dollars on multiple graphs and screens for their boats, they seldom think about what’s supporting that investment.

“Sturdy as can be,” says Johnny Christy of his company’s offerings. “The mounts are made of quarter inch aluminum, which is obviously strong, but if you have to move a hole or make it a little bigger, it’s easy drilling. It’s all powder coated so it won’t oxidize.”

Trophy Graph Systems are user-friendly as they are strong. “Simplicity is the key,” notes Christy. “Easy install and you’re done. We want to keep it simple. You don’t have to mount two or three things. It’s all assembled.”

Affordability is another hallmark of Trophy Graph Systems. “Even for weekend guys that want to run dual graphs- our cost is a lot less,” says Christy.

Dena Woerner-Vick, founder of King Eider Communications, sees a winner in Trophy Graph Systems. “The parents company, Rose Metal Products has a decades-long, rock-solid reputation in the Springfield, MO area. Their slogan, ‘put your money where your mount is’, that’s exactly the point. As much money as anglers are spending to equip boats with the latest electronics- even crappie anglers, not just the tournament bass crowd – it only makes sense to mount those screens on a sturdy, high quality support system.”

“We like our product. Everybody likes it! Getting it in front of people is the hard part for us,” says Christy regarding their decision to work with King Eider. “We’re fabricators. All we know is fabrication. We were thinking we could build a cool product, and everybody would just jump on it.

“We don’t know how to get the word out. Dena does. She can take us to the next level.”

Aside from Vick’s PR prowess the guys at Trophy Graph Systems were impressed with her on-water chops during a frigid trip to Mississippi’s Lake Washington. Her dedication to the sport of fishing as well as her knowledge of the fishing industry uniquely qualifies Vick to lead Trophy Graph Systems in their effort to expand.

Take a look at their offerings: www.rmpstore.com/trophygraphsystems.