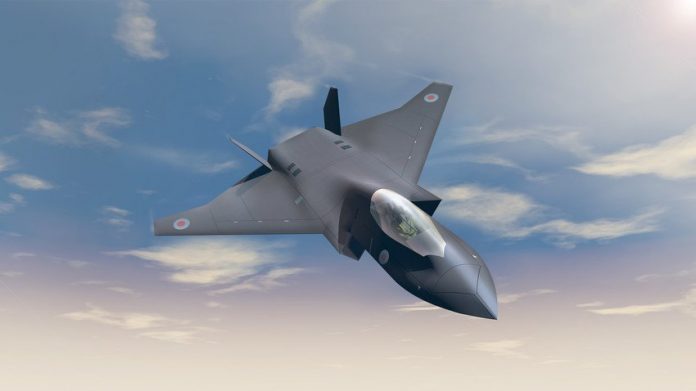 FARNBOROUGH AIRSHOW: The UK Ministry of Defence (MoD) announced today a ‘Flying Combat Air Demonstrator,’ will fly in within the next five years as part of the Future Combat Air System (FCAS) or Tempest program.

This is the first time the MoD has provided an official update on FCAS since it was first announced at Farnborough International Airshow (FIA) in 2018. According to the MoD statement, the demonstrator will play a “critical role in proving the technology and design principles needed to deliver the UK’s FCAS.”

“The flagship project is part of a suite of novel technologies being developed by Team Tempest. These concepts are designed to demonstrate and test the next generation combat air skills, tools, processes and techniques needed to ensure Tempest, the UK’s Future Combat Air System, achieves in service in 2035,” it continued.

Addressing the media at the FIA on July 18, representatives from the MoD and industry partners (BAE Systems, Leonardo, MBDA and Rolls-Royce) confirmed the news ahead of an official statement by the MoD.

The MoD’s FCAS director, Richard Burton, was unable to provide any specific details regarding the maiden flight in 2027. However, he did confirm it would feature a low-observable aircraft, although technologies and configuration remain “highly sensitive.”

“The first flight is the first of many milestones to inform the FCAS program,” he said.

Burton said the UK is conducting a joint concept analysis of FCAS with Italy and Japan to consider industrial base options. More details are expected to be released by the end of the year.

“This is a hugely important step for the program. It is going better than planned,” he added.

There is “huge potential”, he asserted before referring to “shared values and opportunities” across military, government and industry partners.

“We are discussing future direction right now and there will be decisions later this year. We have a wide aperture and are looking at a range of options,” he continued.

Burton also confirmed Sweden remains a “very close” partner in the FCAS program but also confirmed the MoD was “talking to other global partners who are interested in what we are doing”.

However, he refused to speculate on the future of the Franco-German FCAS (SCAF) program, concluding, “We have a solid foundation and are open to conversations as time goes by.”

Details As Low Observable As The Plane

BAE Systems also displayed a colorful, scale model of the Tempest demonstrator at FIA, though company officials confirmed it was not representative of the aircraft expected to fly within five years. The demonstrator has been in development for a couple of years now, he added.

However, BAE Systems’ Herman Claesen, managing director of future combat air systems, did confirm the demonstrator would comprise a “low-observable” aircraft and that the first flight will feature a single, crewed aircraft flying at supersonic speeds.

“Design is progressing well,” Claesen said. “We are learning what it takes to design and develop in a digital world.”

According to BAE Systems, Royal Air Force and company pilots have conducted more than 100 hours in digital flight tests. “This is a new way of working, using model-based systems and 50 patents generated for real, tangible outcomes as we look to lead in to a program with operational capability in the 2030s,” Claesen said.

BAE Systems currently has a total of 19 projects running to support the design and development of the demonstrator.

Also present was Leonardo’s director for major air campaigns, Andrew Howard, who described how the company remains focused on “integrated sensing” to support the generation of a 6G capability.

“Sensor fusion and information management are key enablers to mission success. [FCAS] technology readiness levels are maturing year by year as we grow the capability to be delivered by 2035. The program is maturing in line with expectations,” he said.

Sensor integration will be supported by Leonardo’s Tempest Flight Test Aircraft (FTA) which comprises an overhauled commercial airliner to be employed as a flying laboratory for combat air technology. The Excalibur platform was announced at DSEI in September 2021.

“We are making good progress with the [Excalibur] air frame and expect it to fly by the end of the decade,” Howard confirmed.

He said munitions and effects would be required to be deployed from an internal weapons bay traveling at supersonic speeds with the upcoming demonstration expected to validate and test computational data.

“We are working on software integration which could be like a new application for a smartphone or inserting a USB stick into a computer,” he said.

In terms of effects management, Mew said MBDA is seeking to “coordinate effects at scale in a more decentralized way”.

“Right now, we are conducting a joint concept analysis on future weapons,” he said.

MBDA also confirmed it was already flying simulation sorties in a battle laboratory environment to identify tactics, techniques and procedures to defeat the adversary of the future.

“We are still working through the de-risking of integration and wider power requirements,” he said.

US unveils high-tech B-21 stealth bomber