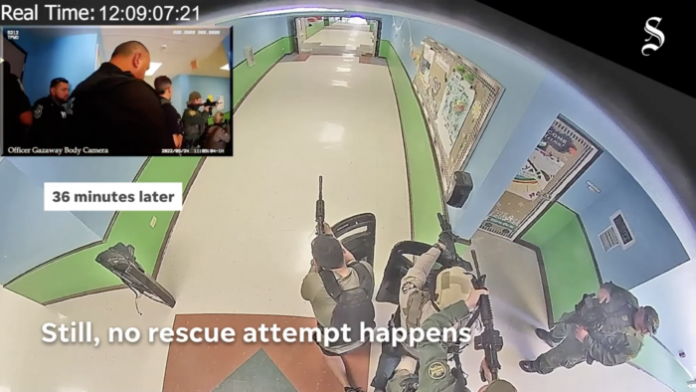 Other than the attacker, the Committee did not find any “villains” in the course of its investigation. There is no one to whom we can attribute malice or ill motives. Instead, we found systemic failures and egregious poor decision making. We recognize that that the impact of this tragedy is felt most profoundly by the people of Uvalde in ways we cannot fully comprehend. …

i. Chief Arredondo was one of the first responders to arrive at the west building.

ii. In the initial response to the incident, Chief Arredondo was actively engaged in the effort to “stop the killing” up to the point when the attacker was located in Rooms 111 and 112, and the attacker fired on responding officers.

iii. By this time, there were dozens of officers on the scene, but Chief Arredondo did not assume his preassigned responsibility of incident command, which would have entailed informing other officers that he was in command and also leaving the building to exercise command, beginning with establishing an incident command post.

iv. Instead, he remained in the hallway where he lacked reliable communication with other elements of law enforcement, and he was unable to effectively implement staging or command and control of the situation.

m. Over the course of the next hour, hundreds of law enforcement officers arrived at the scene.

i. The scene was chaotic, without any person obviously in charge or directing the law enforcement response.

ii. To the extent any officers considered Chief Arredondo to be the overall incident commander, they also should have recognized that was inconsistent with him remaining inside the building.

iii. There was an overall lackadaisical approach by law enforcement at the scene. For many, that was because they were given and relied upon inaccurate information. For others, they had enough information to know better.

n. Despite obvious deficiencies in command and control at the scene which should have been recognized by other law enforcement responders, none approached Chief Arredondo or any of the officers around him or subordinate to him to affirmatively offer assistance with incident command.

o. Chief Arredondo and the officers around him at the south end of the building were focused on gaining access to the classrooms (through use of a breaching tool, a key, or other means) and protective equipment for officers (through rifle-rated ballistic shields, flashbangs, etc.).p. Meanwhile, dozens of law enforcement officers were assembling in the hallway on the north side of the building, stacking up for an assault on the classrooms, and mostly waiting for further instructions pending the arrival of protective gear and breaching equipment.

q. While 911 received communications from victims inside Rooms 111 and 112, Chief Arredondo did not learn about it because of his failure to establish a reliable method of receiving critical information from outside the building.

r. Eventually, Chief Arredondo came to understand there probably were casualties inside Rooms 111 and 112. Even if he had received information of surviving injured victims in the classrooms, it is unclear that he would have done anything differently to act “more urgently.”

s. U.S. Marshals provided a rifle-rated shield and it arrived around 12:20 p.m., approximately 30 minutes before the classroom was finally breached. While officers acted on the assumption that the doors to Rooms 111 and 112were locked, as they were designed to be, nobody tested that assumption.

u. Room 111′s door probably was not effectively locked shut.

w. By the time the BORTAC team breached the classrooms, the tactical command inside the building had been de facto assumed by BORTAC.

x. Acting on effectively the same information available to Chief Arredondo, including an assumption of injured victims in the room, the BORTAC commander on scene waited until arranging a rifle-rated shield and obtaining a working master key before attempting to breach the classrooms.

y. The Committee has not received medical evidence that would inform a judgment about whether breaching the classroom sooner than the approximately 73 minutes that passed between the first responders’ initial arrival at the west building and their eventual breach of the classrooms could have been saved lives or mitigated injuries.

i. As described above, it is likely that most of the deceased victims perished immediately during the attacker’s initial barrage of gunfire.

ii. However, given the information known about victims who survived through the time of the breach and who later died on the way to the hospital, it is plausible that some victims could have survived if they had not had to wait 73 additional minutes for rescue.

A Beast in the Trees

Did Sam Colt Invent the Revolver?