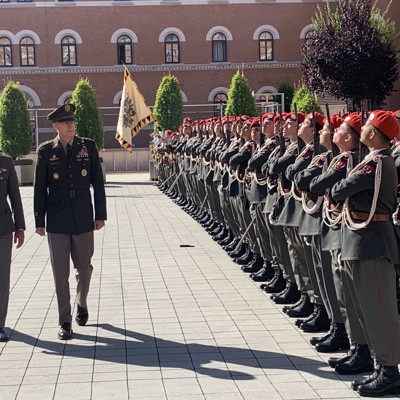 VIENNA – After World War II, Austria instituted a policy of permanent neutrality, which prohibits it from joining military alliances and has largely kept its troops focused on homeland defense and humanitarian roles. Amid increased global insecurity, Vienna is expanding its military presence and connection with the West. On Tuesday, it became the newest official training partner with the U.S. National Guard.

The State Department announced Austria would become a National Guard partner in 2019, so Tuesday’s official ceremony was not driven by Russia’s February invasion of Ukraine. But it has sharpened attention here on what capabilities Austria’s military needs, such as urban warfare expertise and hardening its military buildings and infrastructure, said Maj. Gen. Bruno Hofbauer, a member of Austria’s general staff.

“What Ukraine shows us is we should not [count] on the peacetime bureau buildings,” Hofbauer said at a briefing to the National Guard in Vienna on Tuesday. “As the conflicts are coming closer, we need to reconsider what we have.”

After February 24, the day Russia invaded, “everything changed,” said Austrian Defense Minister Klaudia Tanner. Austria was spending just 0.74 percent of its GDP on defense, or about $2.7 billion.Tanner said she anticipates that budget will rise.

“We’ll need more than 1 percent,” and the budget needs to rise to 1.5 percent in the next five years, she said.

Austria will also look to the Guard partnership to further develop its drone, cyber defense, and information operations capabilities, Tanner said. Austria has drones to provide surveillance at the battalion level, but wants to push smaller drones and the imagery analysis down to smaller unit levels.

After the signing, the first Guard partnership exercise will quickly follow: A trilateral exercise with troops from the U.S., Macedonia, and Austria will take place in August.

“We can never predict the future,” said Gen. Dan Hokanson, chief of the National Guard Bureau. “It’s better to have developed those relationships in those training opportunities in case something does happen, and you need to do more … you can no longer be neutral.”

This is Hokanson’s second trip to Europe in less than a month. In June he met with chiefs of defense in Moldova, Estonia, Latvia, and Lithuania, where the Guard also has training partnerships, and discussed lessons learned from Ukraine.

“What adjustments do we need to make to our state partnership training?” Hokanson said they discussed. “What are they hearing that they need to alter their military so that they can be properly capable?”

Austria’s military reflects its neutral politics; its 14,000 active duty forces are officers and non-commissioned officers focused on homeland defense and in-country policing, and those officers are not required to serve beyond Austria’s borders – they are allowed to turn down international missions if they do not want to deploy. Austria relies on 16,000 conscripts flowing in per year who each provide six months of mandatory military service, then populate an enlisted reserve force that Austria relies on to fill its full component strength.

Austria’s NCOs today “all have multiple missions,” Huber said. “We never had the Russian system.”

Austria’s partnership with the National Guard will be provided by the Vermont National Guard; the two forces have known each other for years, have a green mountainous terrain in common, and have ties to a family made famous by “The Sound of Music.”

In the 1940s, Austrian naval Capt. Georg von Trapp and Maria von Trapp settled in Vermont after fleeing World War II Nazi occupation and traveling the U.S. with their children as the “Trapp Family Singers.”

In the 1980s, the Vermont National Guard asked Austria’s military trainers for help setting up the U.S. Army  Mountain Warfare School, which is located about 50 miles south of the Canadian border.

Long-term, the National Guard is planning to expand its global training partnerships from the more than 90 nations it works with today to about 125, Hokanson said. That number was largely determined by the Guard’s budget for the overseas engagements and the ability of each of its state units to handle additional partner nations. Vermont, for example, has a Guard force of about 3,000, and now has three partner nations: Macedonia, Senegal, and Austria, each of which can bring from five to 50 Guardsmen to a partner nation for a short deployment to train on medical, aviation, or other capabilities. In its first two partnerships, with Senegal and Macedonia, Vermont’s guard has conducted more than 550 military-to-military engagements over the last 20 years, said Vermont Adjutant General Gregory Knight, and the relationships built there “truly remains the continuity” between powers, especially during times of crisis. Nationwide, the Guard receives about $40 million annually to send service members overseas for partnership engagements.

While the two militaries have been exposed to each other for years—Austrian officers already travel to the U.S. for military exchange programs at West Point, as an example—he Vienna visit was the first more tightly connected exchange, which the Guard hopes will begin relationships between Austrian junior officers and Guardsmen that last as both rise through the ranks. The California National Guard and Ukraine have a similar tie, as Ukraine’s 1993 program was one of the National Guard’s first, and is now almost 30 years old.

Getting the Austria program formalized now is important, said John Finney, a senior strategic advisor with the National Guard Bureau who traveled to Vienna with Hokanson.

“I don’t want to overdramatize this. But 108 years ago, the summer of 1914, it was also a beautiful summer,” Finney said. “So here we are on a summer day in Vienna, talking about [Guard training] relationship at a pivotal time in European security. We shouldn’t be beguiled by all the wonderful buildings and the nice restaurants and the coffee houses. This is a serious time in Europe. So from that standpoint, we really welcome Austria’s growing interest in a larger defense relationship with us.”

Knife-wielding robber attacks Texas store clerk. But clerk has a gun, and she fights back — shooting her attacker multiple times.