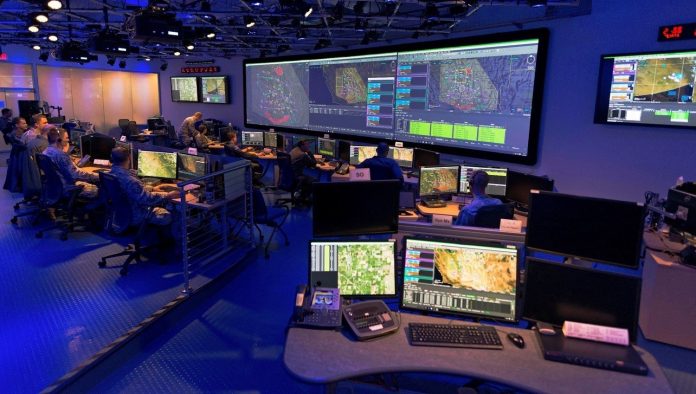 Airmen work in the the Common Mission Control Center at Beale Air Force Base, California, March 2021. (US Air Force/Shelton Keel)

WASHINGTON: General Dynamics Information Technology will provide network and IT support to US Air Forces in Europe in under a new contract worth up to $908 million, the company announced today.

The indefinite-delivery, indefinite-quantity Europe-Wide Information Technology and Enterprise Network (EITEN) contract from the 764th Enterprise Sourcing Squadron at Ramstein Air Base in Germany has a five-year base period and a three-year option. The contract was awarded July 14, according to the Defense Department.

The contract “will allow for greater speed, flexibility, and accessibility in providing Enterprise IT and Network support services, and enterprise solutions to meet USAFE-AFAFRICA mission objectives to address current and evolving threats to our Nation’s defense systems and to enhance existing and future capabilities by combining disparate legacy contracts and support into a single vehicle to support ongoing and future needs,” Jon Marshall, vice president of GDIT’s air force and combatant commands defense division, said in a statement to Breaking Defense.

EITEN will support the entire IT lifecycle to include legacy operational and sustainment activities, he added. Legacy capabilities will be “re-engineered” into what Marshall called “target architectures,” as well as future Air Force-specific capabilities.

The contract will provide a broad range of services, including communications planning support, systems engineering and mission relevant terrain-cyber/mission mapping.

EITEN will deliver traditional IT services that allow airmen “to prepare for and deliver unparalleled mission assurance through cyberspace to warfighters in joint and combined environments,” according to Marshall. “Under the direction of U-A/A6C, Warfighting Capabilities Division, the contract provides Plan and Programs, Client Systems, Cyber Transport, and Cyber Operations support to the MAJCOM and communications squadrons.”

Cyber support and enterprise legacy voice and information systems support is also included under the IDIQ.