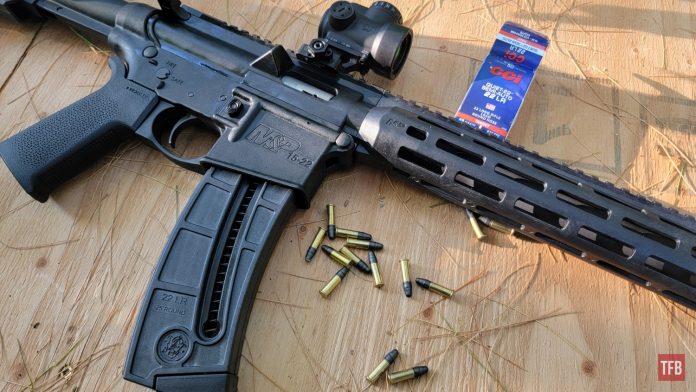 Hello and welcome back to another edition of The Rimfire Report! This ongoing series is about the rimfire firearm world and its various arms, ammunition, and shooting sports. Last week we took another look at the SIG Sauer P322 22LR pistol. My personal P322 has hit over 10,000 rounds in just under 4 months and is showing no signs of stopping so far and I’m going to try to reach 20,000 in 2023 sometime. This week, however, I was finally able to get my hands on a genuine Gemtech Integra 15-22 Integrally suppressed upper. Today we’ll take a look at both it, and another 15-22 pistol upper topped with an oil filter suppressor to see how the two opposite ends of the spectrum stack up in the .22LR suppression game.

The primary advantage of the Gemtech Integra suppressed upper is its simplicity of application in regards to NFA paperwork. The Integra features an effective barrel length of 10.5 inches which is affixed to a permanently attached 7.5-inch monocore suppressor. This has the distinct advantage of bringing the overall length of the 15-22 platform to over 26″ and also a 17.5-inch total barrel length so that only a single NFA stamp is required (for the suppressor).

Another great advantage that the Integra 15-22 upper comes along with is its excellent sound suppression capabilities. The large monocore suppressor design virtually eliminates first-round pop, and also provides a great amount of volume for gasses to dissipate quietly for a truly fun plinking experience. The Integra 15-22 upper is sold as a stand-alone piece and thus you’ll need the compatible M&P 15-22 lower. Currently, the only way to do this is either via a private sale or purchasing an entire 15-22 rifle or pistol.

The M&P 15-22 pistol is generally sold online for around $500 meaning that if you want an integrally suppressed 15-22 plinker, you’re probably going to pay about $1,350 when all is said and done. The Integra 15-22 upper costs $650. Along with the high price tag for entry, the Integra 15-22 is also really only optimal and truly hearing safe with the use of dedicated subsonic or standard velocity ammunition. The 10-inch barrel is still long enough to allow bulk pack plinking ammo to run above the sound barrier and thus makes extended shooting exposure harmful to the ears. So if you were going to suppress a 15-22, is there a less expensive way to do it that is about as effective? A Tax Stamp and an Oil Filter

I don’t like dealing with the NFA any more than the next guy but when it comes to keeping yourself out of jail for protecting your hearing with guns, it’s a necessity. The same M&P 15-22 used to run the Integra suppressed upper comes standard with an 8-inch barrel threaded 1/2×28. This obviously gives you the distinct advantage of not only a more compact package but also the ability to mount virtually any suppressor you want on there with the right thread adapter. Your average rimfire suppressor is still going to cost somewhere in the neighborhood of $400-$600 depending on the brand and that’s still not including the additional $200 for the tax stamp. Since there is no way around getting the tax stamp, is an oil filter/adapter combo a viable alternative that won’t absolutely break the bank? First off, buying an online “oil filter solvent trap adapter” is completely legal and when handled in the correct way, won’t get you in trouble with the law. For a detailed look at how to accomplish this, I’d recommend taking a look at Pete’s great article on the legal way to accomplish this. The combination of the oil filter and adapter costs only about $250 (tax stamp included) and in my opinion, is just as effective on rimfire guns as a dedicated .22LR suppressor. Between myself, Pete, and Hop, none of us noticed any significant sound difference between the two. The major downside with this method of suppressing a .22LR pistol or rifle is that the can is absolutely huge and requires you to use a red dot or pair of sights with a significant height over bore difference. Another downside and one that is mentioned in Pete’s article on how to legally make an oil filter suppressor is that you might be running afoul of the law if you replace the oil filter after it has seen the end of its useful life unless you destroy the whole setup and manufacture a new one and pay for a new tax stamp. Which one is better?

I think the Integra 15-22 is a pretty phenomenal offering from the guys at Gemtech and one that is well worth picking up and adding to your NFA collection if you can afford it. However, if you’re like me, and like the adaptability of larger caliber suppressors for stuff outside of rimfire, the pistol length upper combined with the oil filter suppressor or literally any other suppressor with the proper thread adapter is probably going to be a more practical approach. I’ve personally gotten a lot of mileage out of my user-serviceable Dragoon 450B suppressor despite having to pay about $80 or so for the thread adapter – you’ve seen that suppressor on TFB more than any single one of my guns. I’d like to hear your thoughts. Does the Integra 15-22 need an update to become more appealing to you as an end user? If they made a 16″ OAL variant upper that featured a shorter barrel and longer suppressor segment, would you pick that one up over the current iteration of the Integra suppressed upper? Also, would you ever consider trying a DIY at-home suppressor? Let us know down in the comments and thanks as always for dropping in to read The Rimfire Report! See you guys next week!