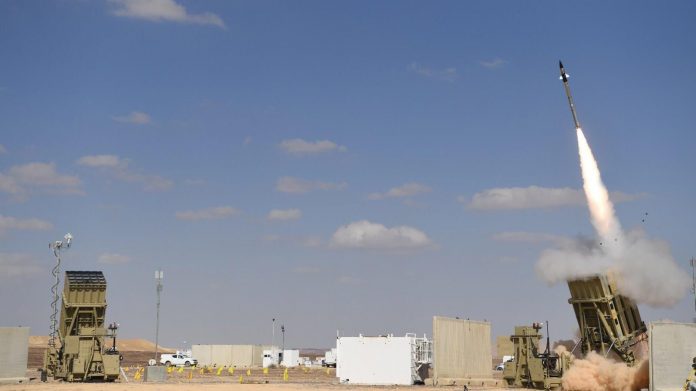 A Tamir missile is launched during a test in New Mexico. (Photo courtesy of Rafael.)

“We just proved it and tested it. And now we’re going to start moving out to procure that system. It’s been in the works for a while. And I would note that we held on funding for that for almost two years until you could prove it,” Gen. Eric Smith, assistant commandant of the Marine Corps (ACMC), said during an event hosted by the Center for Strategic and International Studies and the U.S. Naval Institute.

The public nod from service brass such as Smith is important in the world of military technology testing where good tests don’t always translate into future funding. That is where support from Pentagon leadership comes into play, especially in the form of figures such as the assistant commandant who served as the Marine Corps’ top requirements officer prior to becoming ACMC.

The Medium-Range Intercept Capability (MRIC) prototype, which successfully shot down three drones playing the role of cruise missiles during a demonstration at White Sands Missile Range in New Mexico in late June, has several subsystems. They include the Ground/Air Task-Oriented Radar and the Common Aviation Command and Control System. It also incorporates the ground launcher and Tamir interceptor missiles used by Israel’s Iron Dome.

“We needed a longer-range air defense capability to be able to cover these highly mobile units,” said Smith, referring to the Marine Littoral Regiments. “We asked for a wicked solution to a wicked problem. High mobility, lightweight and much longer range. And MRIC provided that to us.”

He added that the service had planned on conducting four shots during the test event in June but one of the drones being used as a target broke down.

Maj. James Slocum, an officer leading the MRIC program, said the fact MRIC incorporates several other known technologies, such as the G/ATOR radar, was an intentional choice the service made in order to develop the capability quickly, according to a statement published shortly after the testing event.

The Marine Corps has an additional live fire test scheduled for later this year before service brass make decisions about future funding, that statement added.

Chêne Gear to Buy Duck Stamp with Every Purchase

Winter Is Coming! Don’t Forget To Do This