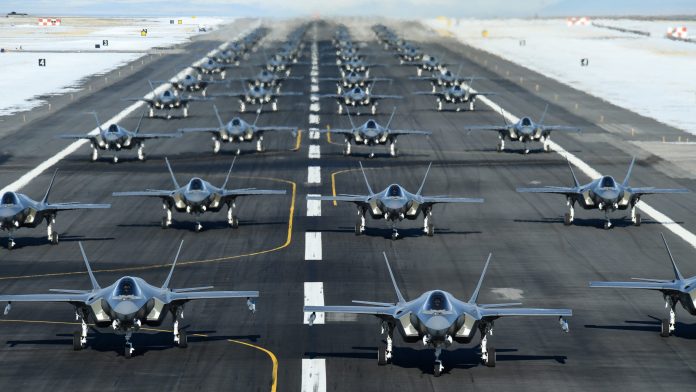 LONDON: The Pentagon and Lockheed Martin have struck a deal on F-35 production lots 15-17, which will encompass about 375 aircraft, but the parties have still yet to hammer down specifics on unit costs as Lockheed contends with inflation and continued supply chain challenges.

On July 18, the Pentagon’s F-35 joint program office (JPO) and Lockheed Martin signed a handshake agreement for the next three production lots of the Joint Strike Fighter, the JPO said in a statement. The deal essentially acts as a jumping off point from which the parties can definitize specific costs and quantities, with the JPO noting that the final aircraft numbers could change due to the fiscal 2023 budget or international orders.

A final production award is anticipated for third quarter 2022, Lockheed said in a statement.

“The F-35 is one of the most lethal, interoperable, and scalable capabilities in the DoD inventory. With the Lots 15-17 handshake in place, our plan is to expedite contract award and deliver additional F-35 capacity to the United States joint force and international partners,” stated Lt. Gen. Mike Schmidt, who leads the government’s F-35 program office.

Negotiations for Lots 15-17 have stretched over a year, with both Lockheed and Defense Department officials hinting that unit prices — which hit an all-time low in Lot 14 as the cost of a F-35A conventional takeoff and landing model decreased to $78 million — could balloon again due to the impacts of COVID-19 on the aerospace supply base, rising inflation and a smaller order compared to the 478 jets ordered in Lots 12-14.

Neither Lockheed nor the government provided details about how much the F-35 would cost in Lots 15-17, but it appears prices will rise. Lockheed stated that “the F-35 enterprise was able to achieve a cost per jet lower than record-breaking inflation trends. This price also includes modernized hardware needed to power Block 4 capabilities, which ensure the F-35 remains the world’s most capable aircraft in production today.”

While the F-35 program office and Lockheed are currently “actively pursing” the finalization of the Lot 15 and 16 contract award, a contract option for Lot 17 will occur later, after the fiscal 2023 budget is passed, the JPO stated.

The drawn-out nature of contract negotiations appears to have had a negative impact on Lockheed’s bottom line. Work on Lots 15-17 began in December 2019 under an initial contract, but since then Lockheed’s production costs have begun to exceed the value of that agreement, Lockheed said in a statement on 2022 second quarter earnings.

Once a production contract is definitized and funded, Lockheed expects to recover those sales and begin invoicing costs, it said.

POVERTY Is the New Normal

3 Ways to Prepare Your Dog for a Hunting Trip