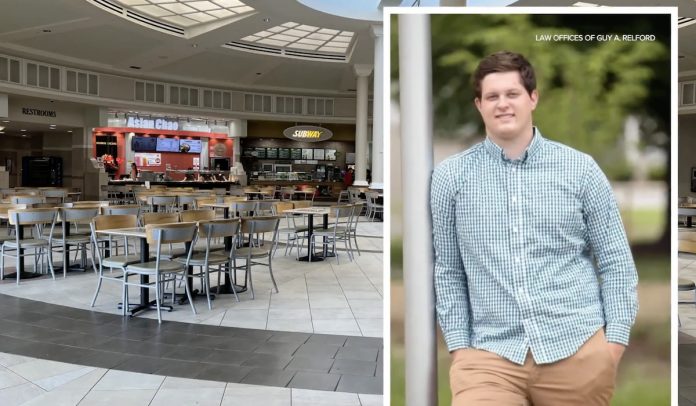 Elisjsha Dicken, the armed citizen responder who fatally shot an active killer at the Greenwood Park Mall in Indiana on Sunday, acted much faster than authorities originally reported.

After watching surveillance footage of the incident, investigators said that the 22-year-old responded to the threat within 15 seconds after the shooting began.

Dicken was reportedly about 40 yards away and was able to put 8 of 10 rounds on target.  The wounded perp attempted to retreat to safety in a nearby bathroom but did not make it. The suspect fell to the ground and expired.

“The surveillance video shows Sapirman exited the restroom at 5:56:48 p.m. He was neutralized by Dicken at 5:57:03 p.m,” Greenwood Police Chief James Ison said in a statement released on Tuesday.

“This error was simply a result of misreading notes during the conference. I feel the need to correct this immediately,” Ison continued. “Thank you.”

Authorities also stated that Dicken had no formal military or police training. The young man’s grandfather taught him how to shoot, reported WTHR 13.

“His actions were nothing short of heroic. He engaged the gunman from quite a distance with a handgun. Was very proficient in that, was tactically sound and as he moved to close in on the suspect, he was also motioning for people to exit behind him,” Chief Ison said.

“Many people would have died last night if not for a responsible armed citizen that took action very quickly within the first two minutes of this shooting,” Ison added.

Though it was initially reported that Dicken was carrying his handgun in accordance with Indiana’s new Constitutional Carry law, the attorney representing the young man, Guy A. Relford, posted on Twitter that Dicken is a licensed permit holder.

we wanted to clarify the matter and state that Mr. Dicken was issued a LTCH by the Indiana State Police on August 4, 2021. (4) pic.twitter.com/rGrtWzgFp6

He was carrying a Glock handgun chambered in 9mm.

Relford also released a statement about his client:

I am proud to serve as Eli Dicken’s attorney and spokesperson. He is a true American hero who saved countless lives during a horrific event that could have been so much worse if not for Eli’s courage, preparedness and willingness to protect others. Because we want to respect the ongoing criminal investigation by the Greenwood Police Department and take time to honor the three innocent lives lost, we won’t be making any substantive comments on Sunday’s events until after the authorities’ investigation is closed.  In the interim, we ask that you respect the privacy of Eli and his family.

A GoFundMe page has been set up to help with Dicken’s “legal and financial challenges.”  It was set up by state Rep. Jim Lucas (R-Seymour) with the goal of raising $500,000.

“Because of how society is, he has had to retain legal help, and we know how expensive that can be, plus just for any future needs he may have,” Lucas said. “The young man went through a horrible experience, if he needs counseling, if he has to take some time off of work.”

“I’d like for this to go nationwide,” he added. “Let people show support for heroes.”

“I know he’s getting nationwide coverage, so I think 330 million Americans can pony up and come up with half a million dollars fairly easy,” Lucas said. “But if we don’t reach it, we don’t reach it.”