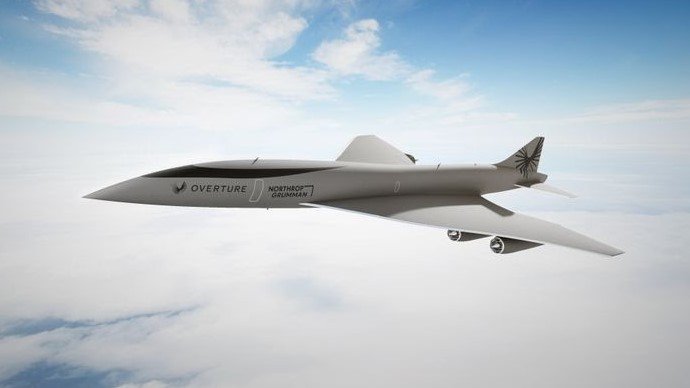 FARNBOROUGH AIRSHOW: Boom Supersonic, a startup attempting to bring supersonic flights back to the commercial world, announced Tuesday that it has teamed with Northrop Grumman to develop a military-focused version of its Overture supersonic aircraft design.

However, details of the agreement are sparse, and it’s not clear what, if anything, will eventually emerge from the team-up.

Boom has made waves in the commercial sector with its promise of delivering supersonic flight for the first time since the Concorde program collapsed. The company is pledging to move 65 to 80 passengers per plane, in half the time of current commercial flights — four and a half hours from Seattle to Tokyo, according to founder and CEO Blake Scholl, who spoke to press during the Farnborough Airshow. Estimated speeds, per Scholl, are Mach 1.7 over water and Mach 0.94 over land for the 200-foot-long, 100-foot-wide Overture design.

Scholl described the system as providing “paradigm-changing capabilities” for the military, saying, “We see not just one but a multitude of possibilities that change the way our forces can operate, from transporting troops or key cargo, or enabling just in time supply of critical materials, to rapid response, surveillance and reconnaissance” missions.

While Boom already has an agreement with the US Air Force’s AFWERX operation on potential VIP transport, this is the first tie-in with the defense industry directly. Scholl said that it is a partnership to explore opportunities, and that Northrop has not invested in the startup as part of the deal.

“I believe there’s going to be military modification of commercial platforms going into the future,” Tom Jones, Northrop’s president of Aeronautics Systems, told Breaking Defense over the weekend. “What Boom brings to future requirements is the ability to span distances across the globe in short timeframe, via supersonics.

“But to do so in a large aircraft capable of [carrying] cargo, carrying people for evacuation or whatever — that, I think, is something that we’re going to look at and say that that’s going to be something of value in the future. If you take that and take Northrop’s legacy of being able to take existing aircraft… modify them to do particular military missions, I think it’s a great partnership. And I’m really excited about what sort of offerings we can give for requirements that, frankly, we might not even fully understand yet. There’s a really good marriage of capabilities.”

There are questions about whether Boom can deliver on their promises. One attendee asked Scholl to respond to the accusations the company is the “Thernaos of the aviation world” — a comparison Scholl dismissed — and there are questions about whether Overture can meet a 2026 first flight target when it has yet to ink a deal with an engine manufacturer.

But if the capability can pan out, then there are a number of applications that are easy to see in terms of rapid response — getting cargo or medical supplies quickly around the globe, or bringing critically wounded forces back to the US for medical treatment.

At $200 million a copy, Overture isn’t cheap, but Scholl argued that it could provide something truly different for military air fleets. He also pushed back at the idea, asked by one attendee, that the Northrop deal is him reneging on previous promises not to weaponize the technology.

“I see all of these as fundamentally peaceful applications. Really, the details of what this airplane is — we’re not the next stealth bomber. That’s not what it’s built for. This is about supersonic speed with meaningful range and meaningful payload,” he said.

As to capabilities, in addition to the promise of quick transportation, the formal announcement included the idea that the “special mission Overture variant could also be used to coordinate other aircraft and ground assets in a variety of scenarios.”

Asked to elaborate on the specific idea that a fast-mover could be used for command and control, Scholl did not go into detail, saying only that “there are many, many scenarios where speed is going to be useful. And the ability to get a command and control aircraft in theater rapidly is important in some key scenarios.

“The meta point here, we pull the camera back a little bit is what we have on Overture is a platform that the world hasn’t had before that delivers — we’ve had speed [from] tiny fighter jets or relatively small bombers, but we haven’t had speed with a lot of range and payload capability. And once we understand that fundamental capability, we see a multitude of possibilities for how that can make a outcome defining difference to the way our militaries operate.”

Valerie Insinna in London contributed to this report.

Iran, US Seem Unlikely to Reach a New Nuclear Deal