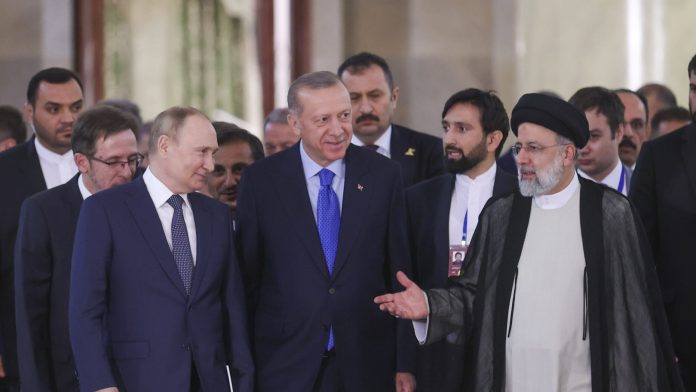 TEL AVIV: Russia’s purported request for hundreds of Iranian drones to aid its fight in Ukraine has prompted some concern in the Israel defense establishment, which relies on Moscow’s acquiescence to strike Iranian weapons shipments in Syria, including UAV-related targets.

The worry was especially keen earlier this week when Russian President Vladimir Putin traveled to Iran to meet with Iranian President Ebrahim Raisi and Turkish President Recep Tayyip Erdogan to discuss the Syrian conflict — an opportunity for Iran to potentially use its newfound leverage to push the Kremlin into a harder stance against the Israeli strikes. But though Moscow has publicly condemned the strikes, according to Israeli defense sources, at least in the last few days there have not been indications of a change in policy by Moscow.

The US accused Russia earlier this month of shopping for Iranian drones, later saying declassified satellite photos showed a Russian delegation visiting an Iranian airfield where some UAVs were on display. After the claim, a top Iranian official denied his country was helping “either side” in the Ukrainian conflict, but this week another official reportedly said Iran’s drones were “prepared… for export to friendly countries.” Prior to Putin’s meeting with Raisi, a Kremlin spokesperson said the UAV issue would not be discussed then.

RELATED: For Israel and new Arab partners, $3 billion in defense business is just the beginning

Jerusalem has found itself in a delicate position since the outbreak of the Ukrainian conflict, attempting, sometimes clumsily, to stay on good terms with the Ukraine-backing United States and with Russia, which has long supported and assisted Syria.

To Israeli officials, the threat of Iranian drones was on display over the weekend after the Israeli military said it had shot down three of them used by Lebanese militant group Hezbollah in an attempted attack on a gas rig in Israeli economic waters. One of the UAVs was shot down by an F-16, while the others were knocked out by a ship-based Barak 1 Medium-Range Surface-to-Air Missile system, according to local reports.

Israel has reportedly conducted hundreds of strikes in Syria in recent years, but in the last few months has become more and more concerned about Iranian UAVs. In November, an Israeli defense source told Breaking Defense, “This is not a new front, but now the actions will be more frequent and more aggressive” against UAV facilities or shipments.

The Iranian UAV industry is also spreading to other countries. In May 2017 Iranian press reported on the inauguration ceremony of a UAV factory that was established In Tajikistan. Israeli defense sources previously said that this plant is currently producing older models of the Iranian “Ababail” UAV.

The Israeli defense sources added that many of the most advanced Iranian UAVs are based on Chinese technology, in addition to some reverse-engineered American tech.