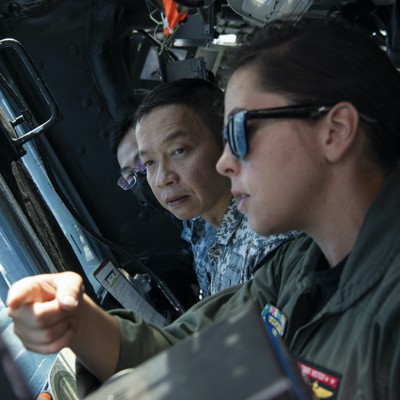 ABOARD THE USS ESSEX IN THE PACIFIC OCEAN — Sailing off the coast of Oahu, South Korean Navy Rear Adm. Sangmin Ahn commands Combined Task Force 176, the first Korean naval officer to lead an expeditionary strike group during the enormous Rim of the Pacific exercise known as RIMPAC.

“It is my greatest honor. I participated in [my] first RIMPAC when I was an ensign in 1992, and I’m back here 30 years later as an admiral,” Ahn told reporters through a translator Sunday.

While all that military power officially is not aimed at a specific country or situation, it’s clear the military leaders here are focused on deterring and defending against the only adversary in the region whose actions could require such precision and force: China. Everything this exercise does has China in its sights, whether or not military leaders are free to say so, and for good reason.

China now has the largest navy in the world thanks to its recent military modernization push, including two aircraft carriers and a third launched in June. Beijing plans for the People’s Liberation Army to become a “world class” military by 2049, according to the U.S. Defense Department’s 2021 report on China’s military. Under leader-for-life Xi Jinping, Chinese leaders have used their improved military forces to threaten and intimidate Taiwan, and defend claims over disputed islands and create new ones in the South China Sea, including building a military installation on Woody Island. In May, China flew 30 planes through Taiwan’s air defense identification zone, forcing Taipei to deploy its planes and air defense missile systems.

As a result, military tensions with China’s Pacific neighbors are rising. In turn, U.S. and regional allies have used their own militaries to assert international boundaries and norms. The U.S. Navy has pushed back on China’s regional claims by sailing ships through disputed and international waters in what the military calls freedom of navigation operations, or FONOPs. The Arleigh-Burke class destroyer USS Benfold on Tuesday conducted its third FONOP in or near the South China Sea since July 13, according to U.S. 7th Fleet. The ship has recently traveled near the disputed Paracel Islands and Spratly Islands, and through the Taiwan Strait.

Pacific Fleet commander Adm. Samuel Paparo said two weeks ago that the development of China’s combat power, including the ability to project beyond its waters, is “very concerning.”

“RIMPAC itself is not oriented against any particular nation state actor,” he said, during a press conference. “But it does demonstrate the solidarity of all of its participants to the international rules-based order and the principles of sovereignty, of freedom of the seas, of the United Nations Convention on the Law of the Sea, and against what otherwise would be expansionist activities on states that would revise that agreed upon international rules-based order…that stands for centuries of international law.”

Bryan Clark, a senior fellow at the Hudson Institute, said that RIMPAC should be viewed “entirely through the lens of China at this point, just because that’s the player that matters.” In the Biden administration’s 2022 National Defense Strategy, China is the Defense Department’s “most consequential strategic competitor and pacing challenge.”

“In a lot of ways, China is what led the United States to reinvigorate RIMPAC and really focus on some more complicated operations,” Clark said. “I think that’s paid off in terms of interoperability with the more capable allies.”

Taiwan’s security and independence has become the top security story in Asia in recent years, following China’s crackdown on Hong Kong’s independence and Xi’s pledge to force reunification with the mainland. Last year former commander of U.S. Indo-Pacific Command Adm. Phil Davidson told the Senate that  China could try to take Taiwan within the next six years.

Clark said the higher-end exercises at RIMPAC like air and missile defense and anti-ship attack are “the kinds of missions you would have to do in defense of Taiwan.”

Scenarios China could impose on Taiwan include invasion, a blockade, island occupation, or a quarantine, he said. RIMPAC operations like search-and-seizure and amphibious assault could be used in these scenarios.

“So I think I would argue that the RIMPAC events, even though they’re not explicitly about Taiwan, they are designed to address the range of scenarios that China might present in Taiwan, it’s not just the invasion,” Clark said. “But because if you think about naval forces, they can help with these other scenarios that are becoming more likely, actually, based on the events that we saw in Ukraine. I think China is rethinking whether an invasion is the right path to take to bring Taiwan back into the fold.”

Taiwan was not invited to this year’s exercise, but some U.S. lawmakers want that to change. Last week, the House passed its version of the fiscal 2023 National Defense Authorization Act with an amendment that said Taiwan should be invited to participate in 2024, the second year in a row Congress has asked that they participate. The bill also included an amendment calling for a government-wide table-top exercise to create a response to a Chinese invasion of Taiwan scenario.

RIMPAC’s training also provides messaging to the United States’ foreign partners and adversaries at various levels, according to Clark, with operations at the lower end with smaller navies that “are really designed to…win the influence battle, if you will.”

“They’re intended to improve the connection between the United States and these smaller countries that are in a lot of ways the target audience for the U.S. and China,” he said. “Both countries are trying to get more influence and try to bring those countries into their camps. And they’ve been, to varying degrees, successful.”

RIMPAC’s higher-end operations are more about practicing and demonstrating to China that countries like Australia, Japan, Korea, and European allies are united and capable of conducting them with the United States, he said.

On Sunday, Navy Secretary Carlos Del Toro said having more than two dozen nations participating is something “that our adversaries cannot replicate themselves. Neither Russia, neither China, or anyone else out there,” speaking to reporters at Hickam Air Force Base, in Hawaii. “And I think it demonstrates…that we will always be united, together.”

Putting an internationally-led task force aboard the USS Essex with staff from countries including Chile, Colombia, and Singapore, helps militaries overcome obstacles such as language barriers and unfamiliar equipment.

“So really and truly, the real secret weapon, the real secret sauce of this exercise are the personal relationships and the ability to solve problems as they come up,” said Capt. Benjamin Allbritton, commodore of Amphibious Squadron Five.

The Essex is both a flag ship for CTF 176 to command and control its forces, and a platform used to move troops via air or sea. CTF 176 consists of 13 ships from eight nations and 1,000 Marines from nine nations, totaling 6,600 personnel, Ahn said.

Rear Adm. Michael Baze, the commander of Expeditionary Strike Group Three, said that actually the easy part is the thinking, planning, and command-and-control relationships that he has with Ahn. The “technical stuff” is what RIMPAC is for.

“Figuring out how to operate effectively together, communications equipment, things like that. That’s why we do this training, so that we can work through those things,” he said.

As RIMPAC continues this month, the complexity will increase until the exercise concludes with an amphibious assault involving all participating nations.

How to Sharpen a Knife

Gun Meme of the Day: New Career For Beto Edition