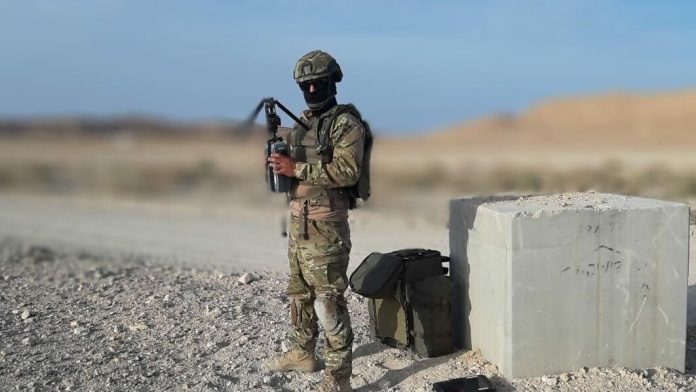 A soldier stands with an Israeli-made Firefly drone. (Credit: Rafael)

WASHINGTON: As the conflict in Ukraine demonstrated the lethal effectiveness of loitering munitions, the makers of the modern weapons said they’re responding to global demand by working to improve their products into more capable and increasingly survivable systems to stay ahead in the market.

Loitering munitions, colloquially called kamikaze drones or suicide drones, provide small teams of soldiers with single-use small unmanned aerial systems, equipped to track and strike a target. While they have been around for decades, they garnered significant attention during the 2020 Nagorno-Karabakh conflict between Azerbaijan and Armenia, in which both employed loitering munitions.

But in interviews with manufacturers of loitering munitions, it is clear that in the wake of Ukraine’s high-profile success, the demand is growing not just for weapons on the market, but the next generation of capabilities. Western customers are looking for loitering drones with more power, increased distance, bigger payloads and advanced technology, while maintaining the ease of use, they said.

Loitering munitions vary significantly in sizes and capabilities. Depending on their size, they can linger in an area for a few minutes or several hours, and, depending on their payload, can target personnel or armor. Some are tube-launched, while others have vertical take-off and landing abilities.

Since Russia’s invasion, the US has shipped more than 800 loitering munitions to the Ukrainians. According the most recent fact sheet from the Pentagon, the shipments have included “more than” 700 Switchblades from US company Aerovironment and an additional 121 Phoenix Ghosts, a secretive loitering munition developed by the US Air Force and AEVEX Aerospace.

As the conflict continues, Western countries are exploring further purchases. For example, the French Army, Defense News reported, plans to place a foreign military sales request with the US to buy Aerovironment’s Switchblades. The Pentagon, too, has taken notice.

“Loitering munitions, I think we’re learning a lot about what they can do and the value that they could have,” said Maj. Gen. Peter Andrysiak, deputy commander of US Army Europe and Africa, in an interview with Breaking Defense in June.

And there are now close eyes on what loitering munitions can do in the future.

“Almost every customer wants bigger, faster, longer,” said Brett Hush, vice president and product line general manager for tactical missile systems at Aerovironment. “But with bigger, longer, faster, … there’s this trade off on portability. But what has been happening [is] the technology just keeps getting better in the propulsion system, in the energy storage  … So duration and distance, range that you can go is improving over time. So we’re addressing those desires by customers.”

There’s also interest in payload diversity. The director of loitering munition systems at Israeli Aerospace Industries, an Israeli manufacturer whose Harop loitering munitions featured in the Nagorno-Karabakh conflict, told Breaking Defense that giving soldiers on the battlefield the ability to put different warheads on the drones is another important iteration.

“We believe that for lower echelons, quadcopters, VTOL [vertical take-off and landing] capabilities is a must have, not a missile,” the IAI official said, speaking with Breaking Defense on the condition of anonymity. “So that would be more different kinds of warheads [and] the capability to pick and choose and to change, like you’re changing shells in a mortar. That’s the idea, but easy to use.”

For The US, ‘Does It Fit In The Conventional Force?’

“As we go through this and learn about what’s happening in Ukraine, we’ll figure out what’s the right level to put those things, and where does it fit in the conventional force? Because I think most of the lessons learned and capabilities came out of special operations,” Andrysiak said.

The Army experimented with Rafael’s new loitering mini-drone, Spike Firefly, during its Army Expeditionary Warrior experiment earlier this year. At that experiment, infantry squads used the mini-drone in an urban setting, including simulating an attack on a sniper position. Loitering munitions could be effective in urban combat because their ISR capabilities improve soldier’s battlefield awareness, makers said.

“When a company enters the urban environment they have normally very limited situational awareness. They don’t know what happens on the streets parallel or just behind the corner,” Rafael’s Palaria said. “If you detect targets, you can eliminate them before the company encounters them.”

Adding Automation, EW Protection And Being Part Of Something Bigger

As industry continues to evolve its loitering munitions offerings, Aerovironment’s Hush said his company wants to add more autonomy to Switchblades, including automatic target recognition and “cooperative engagements,” also known as swarms, adding that swarms are the “next big wave.”

In addition, he added buyers want to be able to integrate the munitions into air and sea assets, as well as plug them into their battlefield networks.

“They want the other elements of that command to be able to see the information and be able to transfer back and forth: ‘Hey, where’s the target? What’s going on with the target?’ BDA [battlefield damage assessment] information, so you get kind of a battlefield awareness,” Hush said.

But to provide that type of information or target enemy positions, loitering munitions need to be survivable, meaning able to withstand electronic warfare threats trying to interfere with its communications systems or knock it out of the sky.

Hush said the two big threats to loitering munitions are GPS jamming and spoofing, and jamming its communications link. Loitering munitions will have to be able to deal with that, with Hush pointing to autonomy as a solution.

Additional survivability challenges depend on the sizes of the munitions. Small ones, which tend to have less range, have “more inherent” survivability. Larger munitions, which have longer ranges, will be more challenging to make survivable.

“Survivability for loitering munitions, for big ones — especially for long distances — is quite a challenge,” Palaria said. “It will be a challenge in the next coming years. It will define how they will look and what [the] market will require.”

He later added, “if you can survive, you’re relevant. If not? No.”

“The humblest individual exerts some influence…”

A Picture from History: William B. Turner