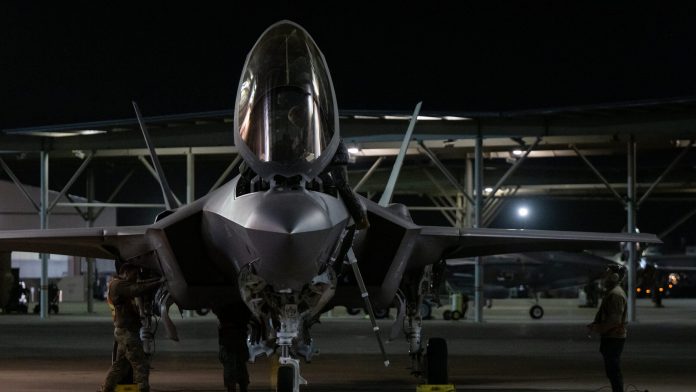 FARNBOROUGH 2022: The Czech Republic will enter negotiations with the US government about a potential sale of up to 24 F-35 Joint Strike Fighters, Czech government officials announced today.

The Lockheed Martin-made F-35 beat out the F-16V Block 70/72 also made by Lockheed, as well as incumbent Saab, which offered either older Gripen C/D models or the improved Gripen E/F variant.

“Our decision to select this option is based on the analysis by the Czech Armed Forces, which clearly articulates that only the most advanced fifth generation fighters will be able to meet mission requirements in future battlefields,” Czech Defence Minister Jana Černochová said according to a news release.

Currently, the Czech air force leases a total of 14 Gripen C/Ds under an agreement that expires in 2027. During a news conference, Černochová said the Czech government must act now to ensure there is not a gap between when its lease runs out and the fielding of new fighters, adding that supply chain shortages could draw out acquisition timelines.  “We must not hesitate, because the lead times take years,” she said.

Maj. Gen. Karel Řehka, chief of general staff for the Czech military, said that the fifth-generation F-35 would allow the Czech air force to stay relevant decades into the future, unlike fourth-generation options that could become obsolete sooner.

“In addition, the F-35 is not just a fighter — it provides an aerial capability combining a fighter, air defense element, as well as cutting-edge surveillance and command, control and communication center while being part of a broad network of Internet of Things including unmanned aerial vehicles, and is able to perform missions that are completely outside the capabilities of the current aircraft,” he said.

Prague’s decision to buy the F-35 is the latest in a series of major wins for jet, including recent announcements by Canada, Finland, Switzerland and Germany. Lockheed Martin deferred questions about the potential sale to the US and Czech governments but heralded the announcement in a statement.

“We are honored the Czech Republic government is interested in the F-35, and we will provide any support the U.S. government requires in discussions about an acquisition,” the company said. “We are confident the F-35 delivers unmatched value as the most capable and lowest life-cycle cost aircraft, while delivering the strongest long-term industrial and economic opportunities compared to any fighter on the market.”

In addition to starting negotiations for F-35s, the Czech Republic canceled a tender for new infantry fighting vehicles after “after two of the three bidders declined to accept new terms and conditions,” the Czech ministry of defense said in a statement. Instead, it will start negotiations with Sweden on the acquisition of CV90 vehicles, which it hopes to co-produce them domestically.