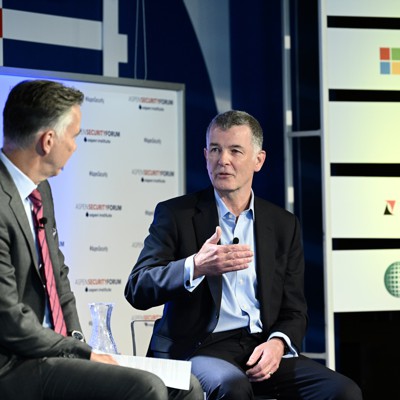 ASPEN, Colo. — America’s internal division is reducing its international influence, China is not 10 feet tall, Iran doesn’t really want a nuclear deal, and Russia is “about to run out of steam” in Ukraine, said Britain’s spy chief in a rare and frank interview about global threats and the state of Western intelligence services.

While U.S. officials have recently called the Russia-Ukraine war a “stalemate,” Moore argued Ukrainians can still win, especially if they are able to strike as Russia regroups after recent territorial gains. Moore argued that those advances were only “some incremental progress over recent weeks and months…It’s tiny amounts.”

Yet those advances depleted the Russia army, which now occupies cities it leveled and earth it scorched to push back Ukraine’s Western-armed resistance, he said.

“I think they’re about to run out of steam. I think our assessment is that the Russians will increasingly find it difficult to supply manpower [and] material over the next few weeks. They will have to pause in some way and that will give the Ukrainians opportunities to strike back,” Moore said.

A successful counterpunch will also be crucial for Ukrainian morale, he said.

“I also think, to be honest, it will be an important reminder to the rest of Europe, that this is a winnable campaign by the Ukrainians because we are about to go into a pretty tough winter,” he said. “We’re in for a tough time.”

Moore’s appearance in Aspen followed a similarly rare public interview by CIA Director Bill Burns, who on Wednesday shot down rumors that Putin is in ill health. Moore backed that up Thursday. “I won’t go too far into what sort of coverage we have around Putin’s circle but there’s no evidence that Putin is suffering from serious ill health,” he said.

The UK spy chief said British intelligence knew of Putin’s designs on Ukraine before the invasion. He declined to say how well-sourced he is today, as Putin’s inner circle has deteriorated or closed off.

When CNN’s Jim Sciutto asked for an assessment of Russian intelligence about Ukraine, Moore replied, “If I reflect on our Russian counterparts, like the Russian military, I don’t think they’re having a great war. They clearly completely misunderstood Ukrainian nationalism. They completely underestimated the degree of resistance that the Russian military would face.”

Moore said he believed Russian intelligence before the war was not being briefed up to Putin, and in its aftermath MI6 has pounced. Since the start of the war, Moore said, “We’ve taken some pretty concerted efforts against them. So across Europe…something north of 400 Russian intelligence officers operating under diplomatic cover have been expelled.” Additionally, intelligence services have rounded up Russian sleeper agents posing as illegal aliens across Europe.

Moore said he hopes Russian intelligence officers in Europe will consider turning on Putin, as many turned against the Soviet Union in the 1960s. “Our door is always open,” he said.

Moore also was asked whether British intelligence has assessed America’s internal division and its impact. Unlike CIA, MI6 doesn’t do analysis. Still, he said, “Of course, the health of the society you represent the economic strength of that society, all of that parlays into one’s influence overseas, and that includes the Secret Intelligence Service. So, of course it counts.”

“The UK has been through a pretty turbulent time in its history over the last few years, but that has not affected the work of the service and frankly, it hasn’t affected the sort of partnerships we’ve had with the United States.”

On China, Moore sounded less bellicose than America’s political leaders, downplaying everything from China’s attractiveness to the world to its cyber capabilities.

“MI6 has never had any illusions whatsoever of communist China,” he said. “We now devote more effort to China than any other single subject.”

“They’re not 10 feet tall. And they are certainly possible to work against, and that’s what we’re determined to do. And we have this huge advantage that the Chinese don’t. We have friends, we have allies, we have an ability to work in a trusted way to try and take on this challenge.”

He said that while China’s Xi Jinping openly states his strategic intent, the West has less insight into the details. ”How they implement, how they organize, how they–what their tactical intent is and then what are the capabilities they’re building up? That’s a black box.”

Moore said he worries that Xi has “a very entrenched narrative of Western weakness…I worry about that because I think he underestimates us, our resolve and power, and that might lead him to miscalculate over the sort of issues that we’ve been talking about over the last couple of days, particularly over Taiwan.”

Moore also described the relationship between China and Russia as “not an equal partnership…. Moscow is very much the junior partner and the Chinese are very much in the driving seat.”

Moore called out China’s ambassador to the United States, Qin Gang, who brought a well-known suite of Communist Party talking points to the forum on Wednesday, drawing frequent groans from the audience. China, Moore said, is clearly “beating the Russian drum and selling the Russian narrative around Ukraine. And doing it without any sense of irony. This is a country that spends a lot of time banging on about sovereignty and territorial integrity. Here is the most egregious example,” he said, “and the Chinese keep on selling their snake oil all around the world.”

“Let’s not overplay the power and the attractiveness of the Chinese model,” Moore said. He said MI6 is seeing evidence that debt and data traps of China’s Belt & Road initiative are starting to wear on countries, like Sri Lanka.

On Iran, Moore said, “I continue to believe that for all of the limitations” of the 2015 nuclear deal called JCPOA, “if we can get a deal, it’s probably the best means still available to constrain the Iranian nuclear program. I’m not convinced we’re gonna get there.”

He added, “I don’t think the Supreme Leader of Iran wants to cut a deal. Iran won’t want to end the talks either.”

The Best Places to Live as Society Crumbles