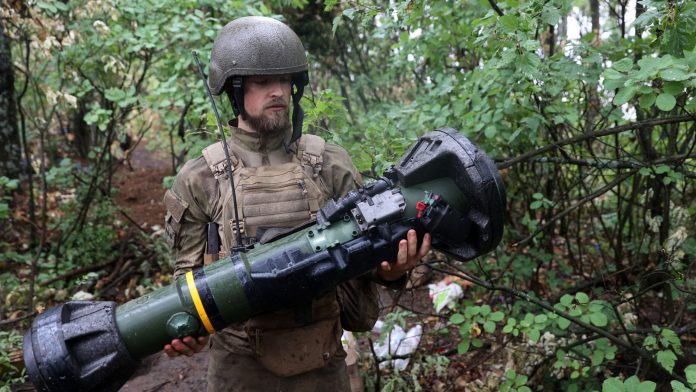 Ukrainian serviceman holds a Next Generation Light Anti-armour Weapon (NLAW) on the position not far from the front line in the south of Kharkiv region, on July 11, 2022, amid the Russian invasion of Ukraine. (Photo by ANATOLII STEPANOV/AFP via Getty Images)

Any Western elation over Ukraine’s successful defense of the lion’s share of its territory has settled into somber observance as the fighting grinds out in the country’s east. As a deadly stalemate threatens, Joshua Huminski of the Mike Rogers Center for Intelligence and Global Affairs writes in the op-ed below that it’s time to face a few hard questions.

In response to a brutal invasion by a much larger foe, the West’s provision of arms to Ukraine is both morally and geopolitically the right thing to do. The bravery of the Ukrainian people, coupled with an unprecedented flow of Western arms, thwarted Russia’s initial attack and pushed their forces back.

But now that the war appears to be settling into a longer conflict and, potentially, a war of attrition, there are several critical and interrelated questions that the United States and its Western partners must ask themselves — the answers to which will have considerable effects on the mid- to long-term consequences of this fight, both in Ukraine and beyond.

Here are four key questions the West must consider and answer as quickly as possible:

Tactically, How Does The West’s Support Need to Change?

In the relative short-term, the West now finds itself, effectively, helping the formation of a modern military that is in the middle of a war of survival — not an easy feat. The West’s support needs to focus on shifting from the immediate provision of tactical weapons to ones with operational and, indeed, potentially strategic effects on the battlefield. The HIMARS and MLRS, and traditional long-range artillery, are examples of this shift.

While these systems significantly increase Kyiv’s capabilities, their complexity requires advanced maintenance and sustainment. The West’s training and support program must, and indeed already appear to, factor this into the calculus. At the same time, the diversity of weapons platforms — coming from several friendly countries — creates a not inconsiderable logistics challenge in sustaining both the munitions needed but also the replacement parts. This is not beyond the ability of Ukraine’s personnel, but it requires more time and training than a single-use fire-and-forget weapon.

The battlefield disparities in Russian versus Ukrainian artillery, and the increasing capabilities afforded by Western arms, requires a rethinking of tactics. Ukraine cannot go shot-for-shot with Russia. Doing so will burn through the country’s munitions stockpiles at an alarming rate — Ukraine is firing an estimate 3,000 rounds of 155mm per day, according to reports — at a time when the West is already struggling to cope with demand (which raises additional questions, below). Advanced long-range rocket systems are more useful, and already having a demonstrable effect, in “deep strike” operations that target command and control nodes, munitions depots and the rear-areas of Russian forces. But the West must encourage Ukraine to be selective in their targets when demand is this much greater than supply.

The West must also be cognizant of the risk of creating a mirror-image of its own forces. In Iraq and Afghanistan, the United States created local force structures that mirrored its own and, in the absence of similar levels of support, political and logistical, were unable to stand on their own in the long-term. The West must instead focus on creating a force that is fit for purpose and context in Ukraine, and one which can support Kyiv’s operational and strategic objectives (more about which, below).

But what really comes next will be informed by answers to the next question.

What Is Ukraine’s Political Objective?

Ensuring Ukraine’s political survival and independence is, of course, the primary objective and the obvious one at outset of the Russian invasion. Yet, answering the question as to what Kyiv’s political objective is now will inform both the force structure and design, and the next course of the West’s assistance.

At the moment, while the West is rushing arms and munitions of increasing capability to Kyiv, it remains unclear as to what the Ukraine’s strategic objectives are. National survival and independence are clearly at the heart of these considerations, but what are Kyiv’s achievable political objectives? Do they remain, as Ukrainian President Volodymyr Zelenski said in May, to push the Russians out of all Ukrainian territory, including Crimea, and reestablish those areas as Ukrainian land? Is this possible?

Clearly, Moscow cannot walk away from Ukraine’s invasion unscathed, and it is certainly feeling the consequences of its invasion. It is politically isolated, economically disconnected, and facing increasingly punitive conventional punishment. But it also remains belligerent and threatens to seize control of swaths of Ukrainian land in the east, while Russian President Vladimir Putin vaguely threatens a far more expansive conquest.

In response, the end goal of West’s support should be to help Ukraine achieve a battlefield position of strength from which if, and when, negotiations start, it finds itself in an advantageous position vis-à-vis Moscow.

This requires NATO being far franker with Kyiv than it may have been thus far — pushing Russia’s forces back to pre-February 2022 borders is an acceptable, and at this stage, likely an achievable objective. Maximalist objectives are not viable, and the pursuit of these aims risks expanding or escalating the conflict. The goal of any Western assistance must, ultimately, be about first Ukraine’s defense, but second, and just as important, creating conditions on the ground for a resolution of the conflict.

Can The West’s Munitions Sustain A Long-Term Fight?

To get to that end goal, however, another thorny question has entered the spotlight in recent months: Given the near First World War levels of artillery fire and the resulting demands on munitions, can the West support a long-term attritional fight? This is not an idle question. In Operational Inherent Resolve in Syria and Iraq, the United States ran low on critical precision-guided munitions. While the fight in Ukraine requires artillery rounds, the demand is occurring at a time when the United State is reducing its stockpiles and purchases. Even the consumption rates of the HIMARS are raising concerns within the Pentagon.

Ukraine’s usage rates are also creating second and third order effects within the NATO alliance. Former Warsaw Pact, now NATO partners, are delivering their Soviet-era stocks to Ukraine creating gaps in their own domestic arsenals. This will, undoubtedly, be backfilled with NATO-standard arms and equipment, further increasing demand on already limited manufacturing lines. Meeting these demands will be difficult.

In this first instance, meeting Ukraine’s demand, is no easy feat. America’s stockpiles of the man-portable Javelin and Stinger anti-air platform are severely reduced, but more alarmingly is the fact that the production lines for these weapons either face considerable lead times (in the case of the former), or is non-existent in the case of the latter.

In the case of the Stinger — and to include force modernization demands — more advanced and complex systems back home such as the F-35 or M1A2 could equally face delays given shortages in semiconductors and supply chain challenges. It is an open question whether the US defense industrial base will be able to cope with the surge in demand, and this could well imperil the long-term support of Kyiv.

The Biden Administration must send not just an immediate demand signal to America’s defense industrial base, but signals that the demand will not simply evaporate in two, three or five years’ time as the sense of urgency ebbs. The investment in time and resources to restart or expand production is not inconsiderable, and major contractors will not want to find themselves without customers just as production ramps up. Guaranteed purchase agreements by the Pentagon for these weapons would assuage contractor concerns and help ensure US stockpiles are healthy in the years to come.

Reaffirming defense spending commitments, or in the case of the United Kingdom the increasing its commitment to 2.5% of GDP by 2030 (or potentially 3%), is certainly to be welcomed. An enlarged NATO both numerically and through the length of its border with Russia will demand additional resources. Europe has benefited from America’s military largess and security commitments throughout and since the Cold War. A reengaged Europe on continental security will free up resources for America’s pivot to the Indo-Pacific — the long-term existential challenge of the 21st century.

Yet, Putin’s Ukraine invasion calculus was likely swayed not by assessments of NATO’s military capabilities, but by doubts of the West’s political will to act in response to Russian aggression. There was little to suggest that the West would have acted or reacted at all based on prior responses to his annexation of Crimea in 2014 or the war with Georgia in 2008. The Western alliances, both NATO and the European Union, looked politically polarized and distracted. Moreover, Ukraine was a party to neither alliance.

To be sure, the West is demonstrating (unevenly) its political will, now, on the battlefields of Ukraine. Whether that will carry over if and when the war settles into a protracted conflict, in the face of rising economic pain, or when a settlement is reached between Kyiv and Moscow, remains an open question. This becomes a question of establishing truly integrated deterrence, the definition and practice of which is as of yet unclear.

The provision of arms and munitions, and the concomitant shortages it is creating, is creating an opportunity within NATO establish a truly modernized and interoperable force, one on which Brussels must seize. Doing so will, naturally, challenge national defense industrial base opportunities, but the upsides of a more focused structure and interoperability are immeasurable.

Conventional deterrence and hard power are absolutely critical, but political will and the willingness to act are just as important and finite a resource. Unless Europe, and the United States, look toward a more robust and long-term political and economic strategy for engaging with Russia (when appropriate) and constraining its behavior (when necessary), the armament programs will be mere window dressing.

Joshua C. Huminski is the Director of the Mike Rogers Center for Intelligence & Global Affairs at the Center for the Study of the Presidency & Congress. There he co-chairs the Center’s program on strategic competition, with a specific focus on Russia. He is a Fellow at George Mason University’s National Security Institute. He can be found on Twitter at @joshuachuminski.