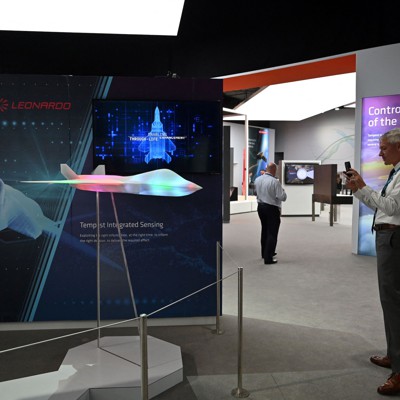 Thousands braved record heat and the year’s third COVID surge to pack the halls at this week’s Farnborough Airshow outside London, which marked the return of giant aerospace and defense events to Europe for the first time since 2019. Many of the (almost entirely maskless) conversations, whether held huddled in the bits of shade by the exhibition halls or inside air-conditioned chalets, centered on shoring up supply chains or the hunt for skilled workers.

Still, the UK’s next-gen fighter jet program made a splash by announcing plans to fly a Tempest prototype within five years. And BAE Systems underscored its dedication to a clean-sheet, future-focused design by showing off an instrument-less mock cockpit whose primary pilot-plane interface is an augmented-reality view delivered via sensor-studded helmet.

Meanwhile, “sustainability” seemed to be everywhere, from radically green efforts like various electric aircraft and the Royal Air Force’s petroleum-free jet fuel to less dramatic efforts to use less fuel or material. McKinsey analysts laid out a path to the airline industry’s goal of “net-zero” carbon emissions by 2050.

“People are just excited to see each other again after all the stuff,” Raytheon Technologies CEO Greg Hayes said. Hayes, who runs the world’s second-largest aerospace and defense firm, spoke with Defense One Tuesday after meeting with Airbus CEO Guillaume Faury. “He and I haven’t literally seen each other in three years.”

Company execs like Hayes use the airshow to hold hundreds of meetings with government and military officials and suppliers. He told us many of those discussions had been dominated by inflation, supply chain problems, and worker shortages.

Most of the big defense contractors have been working on super-fast missiles. “Everybody understands the urgency of developing and fielding hypersonic weapons,” he said. The Pentagon announced this week it had tested a hypersonic made by Raytheon and Northrop Grumman, the second successful test of the Hypersonic Air-breathing Weapon Concept.

But Raytheon sees itself playing a large role in countering hypersonic weapons made by America’s enemies. “The bigger challenge and the bigger opportunity for us, we believe, is in hypersonic defense,” Hayes said. Last month, the Pentagon chose Raytheon and Northrop to each develop prototypes of the Glide Phased Interceptor.

“You think about that hypersonic glide vehicle the Chinese launched. How do you defend against that?” Hayes said. “We have come up with a concept, this Glide Phased Interceptor program, that can actually target these hypersonics as they’re skipping along the atmosphere before reentry. Part of a layered defense approach.”

Hayes also said that he would like to see the Pentagon keep paying contractors more money upfront, something that started at the beginning of the pandemic, so that money could be sent to suppliers who are dealing with supply-chain issues.

Getting more money up front has allowed suppliers to buy materials and components earlier, since many have longer lead times due to the pandemic. “The only way you can do it is if you have the cash to hold the inventory,” Hayes said.

Last year, Lockheed Martin CEO Jim Taiclet told us he also would like to see the progress payments enshrined in Pentagon policy. In June, John Tenaglia, the Pentagon’s director of defense pricing and contracting, in June said officials were still assessing contracting financing and there could be a new policy later this year, Capital Alpha Partners analyst Byron Callan wrote in a recent note to investors.

High-performance drone maker Kratos finds itself in the so-called “valley of death” after the Air Force Research Laboratory wrapped up flight testing of its XQ-58A Valkyrie drone that was part of the Skyborg program. “The continued evolution and demonstration of the USAF Skyborg system is charting the course for the range of tactical applications Skyborg is intended to address and inform,” Steve Fendley, president of the Kratos Unmanned Systems Division, said in a statement. Now the question becomes: what’s next for the promising technology, which allows drones to fly alongside manned combat aircraft.

In other Farnborough news, Boom Supersonic, the startup developing a supersonic flying passenger airliner, has partnered with Northrop Grumman to sell the aircraft to the U.S. military and its allies. Called Overture, Boom unveiled a “refined design” of its four-engine plane that could carry between 65 to 80 passengers at speeds of Mach 1.7. The plane will run on sustainable aviation fuel and have a range of 4,250 miles, according to the company.

And finally, there was one big defense deal announced this week: The Pentagon and Lockheed Martin have “reached a handshake agreement” for hundreds of new F-35 stealth fighters. The exact quantities and price tag of the planes will not be available until the contract is signed, a company spokesperson said in an email. “In the midst of continued COVID-19 impacts and decreased F-35 quantities, the F-35 enterprise was able to achieve a cost per jet lower than record-breaking inflation trends,” the spokeswoman said. “This price also includes modernized hardware needed to power Block 4 capabilities, which ensure the F-35 remains the world’s most capable aircraft in production today.”

Here’s what industry execs were worried about at the Farnborough Airshow.

“Given the worsening security situation,” Prague says, it must bolster air forces now.

That project is proceeding under somewhat less secrecy than the Pentagon’s next-gen air-dominance effort.

No decisions yet, but U.S. and partners, looking at many options.

Two of the Largest Freshwater Fish in the World Declared Extinct