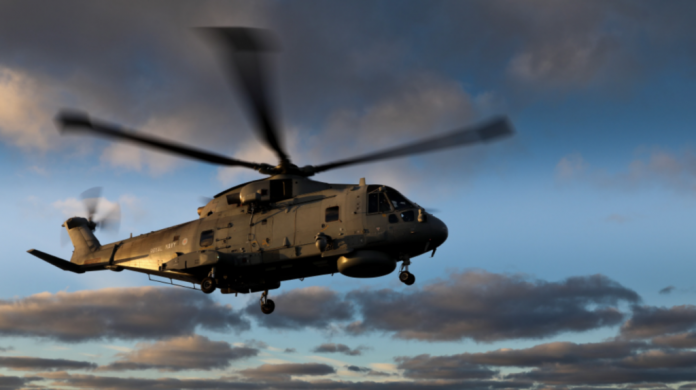 The UK currently uses the Merlin Mk2 for its anti-submarine operations. (UK MoD)

FARNBOROUGH AIRSHOW: It has been a busy year for aviation modernization in the UK — and a new announcement from the UK Ministry of Defense shows things aren’t slowing down.

The MoD announced today that it was awarding Italian defense giant Leonardo a design and development contract for a new uncrewed helicopter design for use by the Royal Navy.

The money isn’t huge — £60 million ($71.5 million) over a four year agreement to deliver a three-tonne technology demonstrator — but the payoff could be large, as the MoD is looking for the new system to fill a number of capability requirements; while the priority is to support anti-submarine warfare (ASW) missions, the MoD also suggested potential use cases for ship-to-ship resupply and casualty evacuation.

The demonstrator, which is expected to weight just 20% of the roughly 10,000 kg Merlin Mk2, will be designed to “track and communicate submarine activity” through the deployment of sonobuoys, an MoD statement suggested. Upon detection of a submarine, the uncrewed helicopter would then call for support from crewed assets, the statement said.

According to the UK’s Minister for Defence Procurement, Jeremy Quin, the new aircraft could “provide a platform capable of delivering improved surveillance and intelligence, enabling crewed Royal Navy helicopters to re-deploy on alternative missions if required.”

“Designed to operate at lower cost than crewed aircraft, capabilities derived from the demonstrator could also reduce the exposure of Royal Navy personnel to hostile threats,” the MoD statement continued.

The uncrewed helicopter is due to undertake its first flight in 2025. A spokesperson for Leonardo told Breaking Defense that “The architecture is still being studied, so we are unable to share anything further at this point.”

There is history between Leonardo and the MoD when it comes to uncrewed rotorcraft. In 2015, the company completed a two-year study in support of the MoD’s Rotary Wing Unmanned Aerial System (RWUAS) Capability Concept Demonstration program. The effort featured the company’s SW-4 Solo helicopter, which successfully conducted simulated deck landings at Llanbedr Airfield in May 2015.

The UK is also part of a European effort looking at alternatives to the Merlin, signing an €26.7m ($28.2m) agreement in June with France, Germany, Greece, Italy and the Netherlands to define requirements for a new medium multi-role helicopter.

It has been a busy Farnborough Air Show for the British government, with both defense secretary Benjamin Wallace and outgoing Prime Minister Boris Johnson making appearances at the show.

“I want you to know that this government believes in British aviation, and British technological genius and its power to bring jobs and growth across our whole country, uniting and levelling up across the whole country,” Johnson said Monday. “And that is why we are investing so massively in defense, the biggest uplift since the end of the Cold War.”

On Monday, the MoD announced on Monday its intention to fly a demonstrator of the Tempest Future Combat Air System (FCAS) within the next five years. According to the MoD, the demonstrator will play a “critical role in proving the technology and design principles needed to deliver the UK’s FCAS” which aims to enter service in 2035.

The maiden flight is expected to include a single, crewed aircraft flying at supersonic speeds and will be conducted in coordination with FCAS partners Italy and Japan.

“FCAS is not just a plane. It is a whole platform for technological change and industrial spin-offs of all kinds, because the combat aircraft systems of the future will be very different even from the Typhoon and some of them will be manned, some of them will be crewed and some of them won’t be,” Johnson said. “And in developing these new technologies and maintaining the air superiority that we have luxuriated in for so long and which is so crucial for our long term security, I want our country to be in the lead.”

Meanwhile, companies expected to bid for the MoD’s New Medium Helicopter (NMH) requirement paraded their solutions at Farnborough. The MoD is seeking up to 44 medium-lift, multi-role helicopters as part of a £900 million ($1.072 million) program scheduled to run over a seven-year period.

The competitors which could replace the UK’s current fleet of Airbus Helicopters’ Puma HC2 and AS365 Dauphin and Bell Helicopters 212 and 412 from starting in 20214 include Leonardo’s AW-149; Bell’s 525 Relentless; ML-70 Black Hawks from AceHawk Aerospace; Lockheed Martin’s S-70M Black Hawk; and Boeing’s MH-139 Grey Wolf. (No formal NMH program updates were provided by the MoD at Farnborough, however.)

The assessment will provide the UK MoD with access to US Army requirements documents which could be used to inform their own decision-making processes- something which is not currently available to other NATO partners. These could be used to assist in the development of future rotorcraft requirements by the UK MoD which will also be in a position to purchase US Army FVL capabilities in the future.

Interestingly, the US and the Netherlands announced a similar, if less in-depth, agreement on future rotorcraft development on Wednesday.

Crazy Train: Ozzy Osbourne to Abandon LA, Return to the UK Because of ‘Gun Violence’