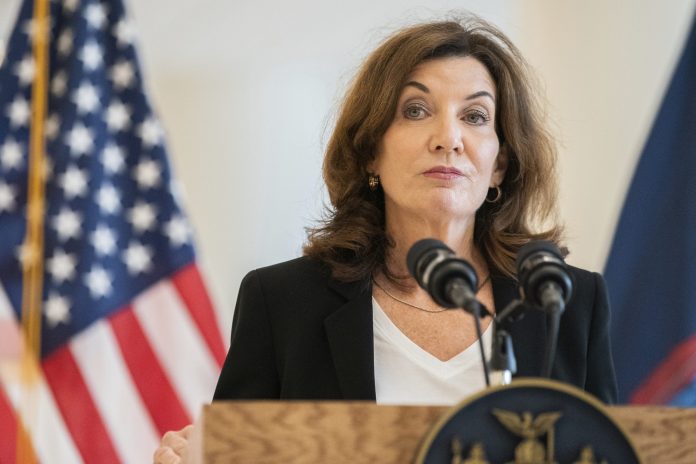 The recent heroics of an Indiana man to neutralize a murderer in a mall shows the folly of New York’s new law restricting where law-abiding citizens can legally carry a firearm with a state-issued permit.

Lisa and Richard MacLeod own Recon Defense, a business in Greene County, New York that sells firearms and provides training and education to customers. Since Gov. Hochul’s new laws went into effect, they’ve been inundated. “Our phone has not stopped ringing. As far as what does this mean? Everyone is so confused no one knows what to do,” Lisa told media. The MacLeods aren’t alone.

Looks like people are getting… creative with the “guns allowed” signs in New York. https://t.co/MbJcD6XkGf pic.twitter.com/tSAU6Grwh0

“Adirondack Park residents deserve better than vague answers and conflicting statements from the governor’s office and state legislators over the intent and application of their gun control law,” said Sen. Stec. Assemblyman Simpson added their bill is necessary to avoid “frivolous prosecution of law-abiding citizens.”

Delaware County Sheriff Craig DuMond criticized the legislation, saying it will backfire and expose New Yorkers to more criminality instead of making them safer. “At this rate, it will not be long until we find ourselves in a state where only the criminals have guns,” Sheriff DuMond said.

Gov. Hochul steamrolled her law in response to the Supreme Court’s Bruen ruling. If she paid attention she’d know striking down the subjective law and protecting the Constitutional rights is exactly where the Court was headed.

Justice Samuel Alito added, “Why isn’t it good enough to say I live in a violent area, and I want to be able to defend myself? All these people with illegal guns, they’re on the subway, they’re walking around the streets. But the ordinary, hard-working, law-abiding people I mentioned, no, they can’t be armed?”

Several lawsuits have already been filed, including another suit by the New York State Rifle & Pistol Association, the winning plaintiff in Bruen.

In Gov. Hochul’s home town, a deranged, racist criminal murdered 10 innocent New Yorkers at a grocery store in Buffalo. He choose the location, in part, because it was a “gun free zone” and New York’s restrictive laws would, “make it harder for someone to stop him,” reported the Buffalo News.

A 22-year-old man also ignored the “gun-free zone” designation and returned fire within seconds of the attack, saving an unknown number of innocent lives. Indiana police labeled Elisjsha Dicken a “Good Samaritan” and his actions “heroic.”

There are countless examples of lawful conceal carriers putting a stop to criminals. They hardly receive the media attention that Dicken has. What’s clear is the two approaches here couldn’t be more opposite. While Governor Holcomb empowered citizens to protect themselves, Gov. Hochul chose to double-down on restricting rights and is emboldening criminals over law-abiding Americans. Again.

How to Create a “Bug Out Box”