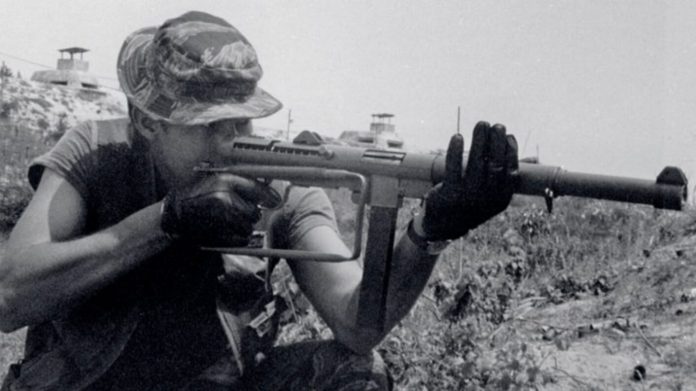 In 1979 Barry Sadler published the first of a series of 53 historical fantasy books orbiting around Casca Rufio Longinus, the Roman legionary who purportedly pierced the side of Christ with the Holy Lance. Barry Sadler was a Vietnam-era US Special Forces veteran best known for his hit song, “The Ballad of the Green Berets.” This book series was titled, “Casca, The Eternal Mercenary.”

Sadler penned the first 22 books, while other writers continued the series. The titular central character is the aforementioned Roman legionary. As Christ hangs dying on the cross some of his blood wipes across Casca’s lips. At that moment by the power of the Son of God Casca is made immortal, cursed to wander the earth a soldier until the Second Coming. While much of the writing is fairly vapid, that was an incredibly cool plot device.

Each book explores Casca’s experience fighting during some different historical era. By the time he has lived a century or two Casca gets very, very good at the art of soldiering. If I could have carte blanc to craft any work of fiction it would be to retire behind my MacBook and resurrect the tale of Casca in a modern context. Spinning that story in Information Age trappings would be such fun. It would also make a simply fantastic movie.

So why all this talk of a 1980’s-era pulpy men’s fiction series mostly forgotten by the modern world? Because Lauri Allan Torni was a decent approximation of a real-live modern-day Casca. He was the eternal soldier.

Born in 1919 in Viipuri Province in Finland, Lauri Torni fought the Soviets beginning with the battles around Lake Ladoga in December of 1939. Torni was commissioned a Vanrikki, or 2LT, in the Finnish Army. While fighting the Soviets during the Continuation War Torni developed a reputation for audacity and inspirational leadership. In 1943 he took command of his eponymous Detachment Torni, a deep penetration special operations unit that took the fight to the Russians deep in their rear areas, cut off and alone. The future President of Finland, Mauno Koivisto, served under his command. The unit adopted a distinctive unit insignia that featured a prominent “T” in reference to their dashing young commander.

Torni’s marauders caused such consternation among Soviet combat formations that they put a bounty of three million Finnish marks on his head. Torni was the only Finnish officer so recognized. In 1942 Torni skied across an antipersonnel mine and was badly wounded. On July 9, 1944, Lauri Torni was awarded the Mannerheim Cross for exceptional bravery while fighting the Soviets. The Mannerheim Cross is the Finnish equivalent of the US Medal of Honor.

Political alliances in the 1940s were complicated, and when arrayed against the Russian bear the Finns found themselves fighting alongside the Germans. During the course of World War 2, the Germans accepted volunteers from across Europe and the occupied territories for the SS. Torni trained with the Waffen SS starting in 1941 and was eventually promoted to Untersturmfuhrer.

Like most of Europe, Finland had a tough time of it during the war. Their war with the Soviets waxed and waned through 1944 until it formally ended with the Moscow Armistice. Convinced that Communism represented an existential threat to the Finnish way of life, Torni traveled to Germany and trained in sabotage and unconventional warfare with the SS. In early 1945 he fell in with German units fighting the Soviets near Schwerin until he was captured by the British. Remanded to a POW camp in Lubeck, Torni ultimately escaped and made his way back to Finland soon after VE Day.

Finland had been caught between two desperate evils and was anxious to cleanse itself of the Nazi taint. As a result, despite his holding the Mannerheim Cross Torni was arrested and sentenced to six years in prison. He escaped and was rearrested a time or two before evading into Sweden. In 1950 Torni signed on as crew aboard the Swedish cargo ship MS Skagen bound for the Gulf of Mexico. Once within sight of the American coast, he dove overboard and swam into Mobile, Alabama.

Equipped with nothing but his wits Lauri Torni made his way to New York City and established himself in Brooklyn’s Sunset Park among the Finnish diaspora there. He supported himself working as a carpenter and cleaner. In 1954 Torni enlisted in the US Army as one of around 200 foreigners accepted under the provisions of the Lodge-Philbin Act to fight the Soviets. Upon his enlistment, he adopted the name, Larry Thorne.

Fighting Under a Third Banner

Larry Thorne was a warrior’s warrior, so he naturally gravitated toward the US Special Forces. He was 36 years old when he attended Airborne school. While an SF soldier, he instructed survival, skiing, mountaineering, and guerilla tactics. In 1957 he was granted US citizenship and commissioned a 2d Lieutenant in the Signal Corps. From 1958 through 1962 Thorne served with the 10th Special Forces Group in Bad Tolz, West Germany. While with 10th Group he led a successful covert mission into Iran to recover sensitive equipment and bodies from a downed USAF C130 cargo plane.

Thorne first deployed to Vietnam in November of 1963. As part of Special Forces Detachment A-734 Thorne worked with the Civilian Irregular Defense Groups. During one particularly intense attack on CIDG forces at Tjnh Bien he earned a Bronze Star for Valor. With two Purple Hearts to his credit and his first tour complete, Thorne rotated home to the US.

CPT Larry Thorne deployed on his second combat tour in Vietnam in February 1965 with the 5thSpecial Forces Group. He was assigned to the Military Assistance Command, Vietnam—Studies and Observations Group (MACV-SOG). On October 18, 1965, CPT Thorne launched aboard a South Vietnamese H34 helicopter from Kham Duc Special Forces Camp on a mission to locate Viet Cong nodes along the Ho Chi Minh trail for attention with airstrikes.

The air component of this operation consisted of a pair of RVNAF (Republic of Vietnam Air Force) H34s as well as a USAF O-1 Bird Dog Forward Air Controller aircraft. While operating in the Quang Nam Province some 25 miles from Da Nang the three aircraft encountered unexpectedly foul weather. The second H34 dropped through a hole in the clouds to insert a six-man surveillance team. When they climbed back above the cloud cover both Thorne’s H34 and the Bird Dog were gone.

During his Finnish service, Laurie Torni carried a Suomi KP/-31 9mm submachine gun. Suomi KP/-31 is short for Suomi-konepistooli or “Finland Submachine Gun.” One of the most successful SMG designs of WW2, the Suomi KP was a rugged machined steel open-bolt weapon that fed from either 36-round stick magazines or 71-round drums. The drum magazine of the KP was later aped by the Soviets for their PPD and PPSh SMGs.

The Suomi KP weighed 10.14 pounds and cycled at between 750 and 900 rounds per minute. Some 80,000 copies were produced between 1931 and 1953. The KP saw service all the way through the Israeli War for Independence and the Korean War. Unlike similar weapons, the Suomi KP featured an easily exchanged barrel. Finnish operators were issued with a spare barrel to use when the first overheated.

Photographic evidence of Torni’s service with the Waffen SS is scant. However, late in the war, SS formations would have been armed predominantly with the MP40 SMG, the Kar 98k bolt-action rifle, and the MP44 assault rifle. The MP40 was an evolutionary development of the previous MP38. The MP38 was built around a machined steel receiver, while that of the MP40 was pressed from sheet stock. The MP40 was the first mass-produced infantry combat weapon to eschew wooden furniture and be designed specifically for mass production.

At the time he went missing CPT Thorne was armed with a Swedish Carl Gustav m/45 submachine gun. This weapon was formally designated the Kulsprutepistol m/45. US forces called it the Swedish K or K Rifle.

The Swedish K saw extensive service with US Navy SEALs who favored the weapon-based upon its fast handling and capacity to fire when coming straight out of the surf (“Over the Beach”). Army Special Forces and CIA operators used the weapon as well. Many of the K Rifles used in Vietnam were sanitized without serial numbers. A few included a superb sound suppressor.

The Swedish K was an open-bolt full auto-only design of a fairly conventional layout. It fed on 36-round stick magazines and cycled at a sedate 600 rounds per minute. When Sweden forbade further exports to the US in protest to the war in Vietnam the government tasked Smith and Wesson with contriving a replacement. The subsequent M76 saw very limited use in the latter stages of the war.

CPT Thorne was listed as missing and was subsequently promoted to Major. Rumors swirled that this indestructible warrior had survived the crash of his aircraft and was either actively fighting against the communists or languishing in some secret POW camp. However, in 1999 a Joint Task Force-Full Accounting team along with Finnish personnel located his crash site. Major Thorne’s remains were finally definitively identified in 2003, and he and his teammates were repatriated to the US. Major Larry Thorne was buried at Arlington National Cemetery on June 26, 2003. He is the only veteran of the Waffen SS interred in this hallowed space.