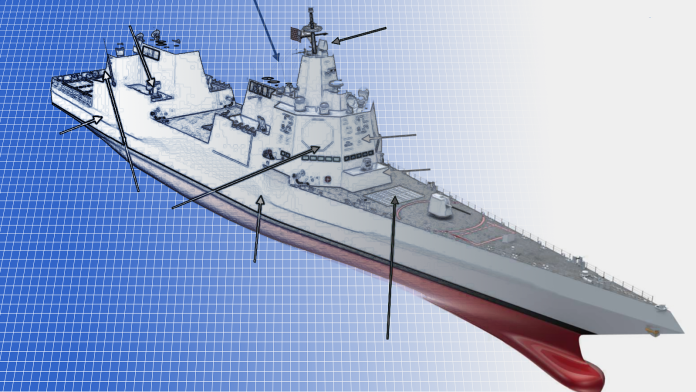 The Navy unveils a more detailed, but not finalized, concept for its next-generation destroyer, the DDG(X).(Graphic by Breaking Defense; original concept model via US Navy)

WASHINGTON: The Navy has awarded both HII and General Dynamics Bath Iron Works engineering and design contracts for the service’s next large surface combatant dubbed DDG(X).

The Navy did not disclose the dollar value of the contracts citing “source-selection sensitive information,” according to the announcement released late Friday. The contracts are an early but important step for the ship destined to replace the fleet’s workhorse, the Arleigh Burke-class destroyers, because they will result in the blueprints that guide the program for decades to come.

“We are excited to continue on this path with our Navy and industry partners,” Kari Wilkinson, Ingalls Shipbuilding president, said in a statement following the contract award. “It provides us a tremendous opportunity to bring best practices and innovation from our experienced engineering team to the design of this important future surface combatant.”

“Bath Iron Works is eager to bring our cutting edge engineering and design expertise, now applied to the DDG 51 program, to the next generation of large surface combatants,” said Chuck Krugh, BIW president, in a separate statement on Friday. “The opportunity to work alongside HII and our industry partners to meet the Navy’s needs for capability, schedule and cost will result in synergies that build on other extremely successful Navy construction programs.”

HII and Bath Iron Works, the two companies that have both built versions of the Arleigh Burkes since 1985, are the US Navy’s favored vendors for large surface combatants, so much so the service brought employees from those companies to work within the Navy’s internal DDG(X) team, a service official said earlier this year.

After the design phase, it’s almost a certainty that one or both of those vendors will be building the future ship. What is less certain, however, is the way in which the work will get handed out. When managing major shipbuilding programs, the Navy traditionally will have industry compete for work as a means to force vendors to keep their prices down. Given HII and Bath Iron Works’ long histories with the DDG-51 class, it’s extremely unlikely a third vendor would stand a chance in becoming the prime contractor for the newer ship class.

But the Navy still could have the two companies compete against one another to see who provides the best deal. Even in that case, the politics of shipbuilding and the need to maintain the industrial base means the losing vendor would likely be involved in building the new destroyers, but from a less preferable position as the second shipbuilder.

Another possibility is that a competition is avoided altogether. The Senate Armed Services Committee in its recent draft of the next defense policy bill has already started angling to have HII and Bath Iron Works create a teaming arrangement, citing the mishaps of previous shipbuilding programs, USNI News reported.

Breaking Defense has sought comment from Naval Sea Systems Command about the status of the DDG(X) program’s acquisition strategy.