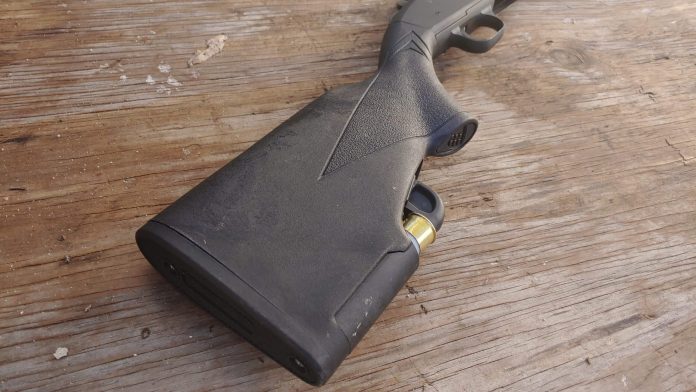 Shotguns have plenty of flaws, and one of the most obvious is the relatively low ammo capacity most tubular shotguns offer. In a world where the thirty-round magazine rules having eight rounds of 12 gauge can be a tough proposition. As such, one of the most common upgrades to a defensive or tactical shotgun will be an additional source of ammo on the gun itself. These most commonly come in the form of side saddles. Today, we are looking at something different. The Flash 5 by Tactaload combines a stock with a means to carry ammunition.

Instead of mounting a couple of rounds on each side of the gun, the Flash 5 integrates an integral five-round magazine into the stock, and the rounds feed from the bottom of the stock. This integral magazine is complete with as spring and follower and feeds each round one by one. The Flash 5 can hold shells ranging in length from 2.75 inches to 3.5 inches. To chamber 3.5-inch shells, the user needs to remove an internal spacer, but for 2.75 and 3-inch shells, you can load and go.

Is It Better Than a Side Saddle?

That’s a good question, and in many ways, it offers advantages over the side saddle. It’s tough to say if one is better than the other. The Tactaload Flash 5 does offer truly ambidextrous options for reloading on the fly. Side saddles are not lefty-friendly by any means, and the Flash-5 solves that problem.

The shells are also horizontally instead of vertically, and this makes the transition from stock to tube quick and simple. The Flash-5 also keeps the weapon more streamlined and less likely to snag on the environment or catch on your gear as blast away.

The gun remains better balanced with the Flash 5 since the ammo is located in line with the weapon and not off the side. Oh, let’s not forget the ammunition is well protected by the stock compared to the exposed nature of shells carried by a side-saddle. From a duty perspective, this is quite valuable.

Also, the Flash 5 has a retainment device, so the shells cannot accidentally fall out in any way.

With the Flash 5, there is no reason you can’t have both a side saddle and a Flash 5 stock. This doubles the ammo capacity potentially, and they work together without issue.

How Does it Serve As a Stock?

Since you are utilizing the Flash 5 as a stock, it’s pretty damn important that it functions as a stock. Luckily, the minds at Tactaload thought their way through this and ensured it wasn’t a crappy stock. First, you can adjust the length of pull with a system of spacers. It’s easy and drama-free, I keep it short at 12.5 inches, and you can add a spacer to transition to 13 or 13.5 inches.

I like it short and sweet for better control. The length of pull doesn’t affect capacity like it would a Speed Feed stock. Additionally, it features a nice comb for a solid cheek weld and the option for a recoil pad. The pistol grip portion is textured for a very easy grip which makes my style or push/pull recoil mitigation a blessing.

The shells load into the stock just like they’d load into a box magazine. Instead of feed lips to keep the shells in place, a spring-loaded retainer ensures they never slip and slide out of the gun. The retainer is defeated when you draw the shell with a natural movement. Loading requires you to push the retainer in and load one round at a time, but no interaction is necessary when reloading from the Flash 5.

I loaded up five dummy rounds and proceeded to try and get a round to accidentally fall out with normal use. I fired full-powered buckshot, 3-inch 000 buckshot, slugs, and more, and the shells never shifted, moved, or found their way out of the stock. I sprinted, jumped, and bumped the stock to try and make rounds pop out, and nothing happened.

I butt-stroked my Century Bob punching bag over and over at different angles and could never free a round unintentionally. I have zero issues trusting the retention of the Flash-5.

Reloading on the Fly

Obviously, as a spare ammo carrier, I have to test how handy it is to reload your shotgun on the fly. I practiced mainly with dummy rounds and executed hundreds of reloads. Shell after shell was removed and reloaded into the tube or directly into the port. While reloading, I never saw a round get hung up or stuck and fail to feed downwards. It’s a very simple and rugged system.

The spring is rated for thousands of reloads, and I didn’t have the time to test it for failure. If I tried that, I’m betting my dummy rounds fall apart first. I practiced both tube, and port reloads, and I did so against a side saddle to see if there was a major difference against a timer with live rounds.

With port reloads, the side saddle did tend to be a little faster. There is a shorter distance between the loading port and the side saddle, making it fairly simple to toss the round into the chamber.

My favorite thing about reloading with the Flash 5 is that the round is always in the same place. With a side-saddle, I’m shifting forward and rearward to find shells. With the Flash 5, I consistently reach to one location to retrieve shells.

A Dash of Flash

The Flash 5 provides shotgunners a simple but robust stock option that excels at being a stock and a spare ammo holder. It certainly beats the pants off the Speed Feed stocks and provides an ambidextrous, streamlined and well-balanced source of spare ammunition. The Flash 5 is available for Remington 870 and Mossberg 500 series shotguns, with more options coming soon, according to Tactaload. It’s an unusual solution but a very capable option for the home defense shotgun.

Best combat boots for women of 2022

Finland, Sweden Would Contribute Militarily to NATO on ‘Day One,’ General Says