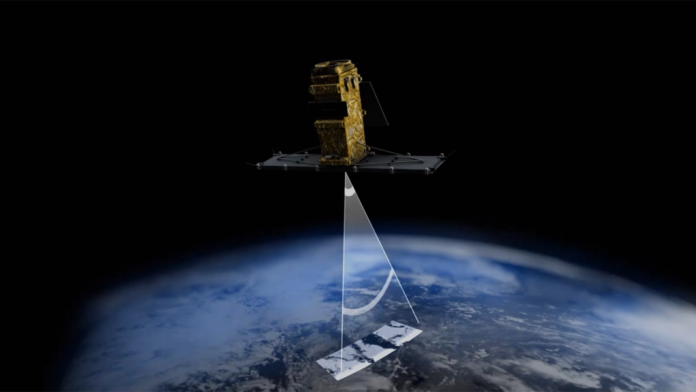 The Canadian government is planning to replace its three RADARSAT Earth observation satellites used by the military to monitor the country’s borders. (Screengrab from Canadian Space Agency video)

WASHINGTON: The Royal Canadian Air Force (RCAF) move to establish a new space division is less of a revolution than an evolution, building on current operations and force structure — with no plans to break out a separate space service mirroring the US Space Force.

“The creation of a Space Division within the Canadian Forces [Air Force] seems to me to represent a re-packaging of existing capacities to provide more profile and coordination between units engaged in space-related activities,” said Paul Meyer, former Canadian ambassador to the United Nations and now a fellow at the Simon Frasier University in Vancouver.

“Although there is an element of ‘keeping up with the Jones’ here, the brigadier in charge of space operations explained that the CF [Canadian Forces] had decided against setting up a distinct space ‘trade’ within the CF — hence no intention to establish a ‘Space Force’,” he told Breaking Defense in an email.

Jessica West, a space expert at Canada’s Project Ploughshares, said the decision to forgo an independent space service is significant, in that it signals an emphasis on military support functions.

“The creation of a division within the military [structure] rather than a standalone force points to the integration of space across military functions rather than a ‘warfighting’ orientation,” she told Breaking Defense in an email.

The Canadian Department of National Defence’s announcement, made July 22, explained that the new 3 Canadian Space Division “is an evolution from the RCAF’s Director General Space organization. As the responsibility for space operations has steadily grown over the last decade, the space-focused team within the RCAF has been re-organized to meet this expanded scope.” This will include the re-establishment of the 7 Wing, combining the 7 Space Operations Squadron and 7 Operations Support Squadron, that “will provide space-based data and capabilities” to support Canadian Armed Forces operations.

The division will comprise 175 personnel, and increase of 85 that will be made gradually over the next several years in line with Canada’s current defense policy, “Strong, Secure, Engaged,”  the announcement added.

West noted that Canada is planning to release an updated defense strategy this fall.

That new policy is “likely to give greater prominence to space-based capabilities domestically, particularly in support of defence activities such as communications and surveillance capabilities in the Arctic,” she said in an email to Breaking Defense. It also is expected “to increase focus on providing space-based sensors for all-domain awareness” to the joint North American Aerospace Defense Command (NORAD), she said.

Canada currently operates the tiny Sapphire satellite, launched in 2013, which monitors objects in space and feeds into the US Space Surveillance Network. The Canadian defense department in 2020 announced a plan to replace Sapphire, under a project called “Surveillance of Space 2,” worth between $100 million and $249 million in Canadian dollars (about $78 million to $193 million US).

“The SofS 2 Project will procure either a sensor or a system of sensors for the purpose of tracking man-made objects in Earth orbits having altitudes of 6000 km or greater above the surface of the Earth,” the announcement said.

Further, Canadian Defence Minister Anita Anand in June announced that the government is allocating $4.9 billion Canadian ($3.8 billion US) over the next six years to help modernize NORAD, alongside a number of

The June 20 announcement was light on the details, but said that the funds would be spent on capabilities that fall into “five inter-related areas,” including improved abilities to detect threats and enhanced air defenses.

“We will build a new Northern Approaches Surveillance system that will significantly expand the CAF and NORAD’s situational awareness of who and what is entering Canadian airspace from the North, and we will continue to strengthen the CAF’s current space-based surveillance capabilities,” the release said.

This includes development of “modernized command and control,” “enhanced satellite communications in the Arctic,” and ” new, advanced air-to-air missiles that can engage threats from short, medium and long-ranges, and that will be compatible with Canada’s modern future fighter fleet,” according to the announcement.

“A big unknown relates to NORAD modernization,” Meyer said, including with regard to space-based surveillance.

However, he said, the government already has slated a small sum of some $10 million Canadian in the current budget for the Canadian Space Agency to begin planning for a constellation to replace its three RADARSAT synthetic aperture radar satellites for Earth observation.

The Canadian defense department uses data from the RADARSAT birds under an agreement with the space agency, and the current national defense policy notes that the government intends to replace them “to improve the identification and tracking of threats and improve situational awareness of routine traffic in and through Canadian territory.”

Is the Army Misplacing the Blame for Its Recruiting Crisis?