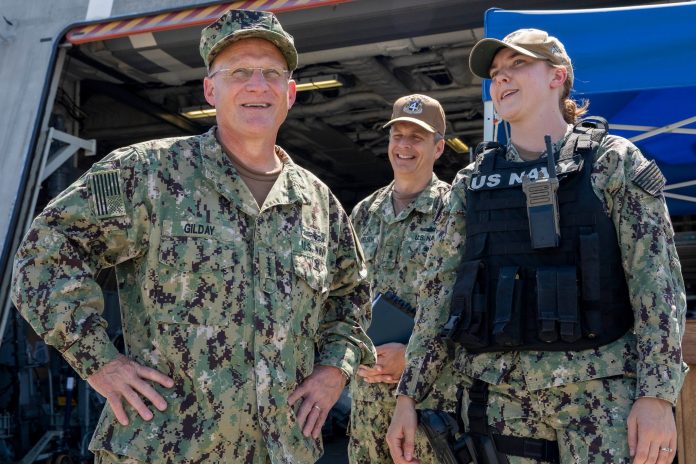 WASHINGTON: In his new navigation plan published today, Chief of Naval Operations Adm. Michael Gilday delivered an unvarnished look at the future fleet his service needs, including “more than” 350 manned vessels, scores of unmanned vessels and around 3,000 aircraft — if the Navy gets its funding.

Navy brass previously drew the ire of lawmakers this budget cycle for presenting an unusual choose-your-own-adventure style 30-year shipbuilding plan that laid out three unique ship construction profiles for lawmakers, two of which assumed relatively flat top line budgets with 318 or 322 ships in 2045, and one that allowed for significant budget growth featuring 363 vessels by the same year.

But in Gilday’s in new navigation plan (NAVPLAN), a follow up to the document published in January 2021, he lays out a de facto shipbuilding request under the umbrella of “Force Design 2045.”

“In the 2040s and beyond, we envision this hybrid fleet to require more than 350 manned ships, about 150 large unmanned surface and subsurface platforms, and approximately 3,000 aircraft,” according to the document, which was provided to reporters in advance of its publication.

And if the money doesn’t come, then Gilday makes no secrets about his plan B.

“To simultaneously modernize and grow the capacity of our fleet, the Navy will require 3-5% sustained budget growth above actual inflation,” Gilday writes. “Short of that, we will prioritize modernization over preserving force structure. This will decrease the size of the fleet until we can deploy smaller, more cost-effective, and more autonomous force packages at scale.”

In a call with reporters shortly after the NAVPLAN was made public, Gilday sought to differentiate the ship numbers in the new document with those in the administration’s budget request. He emphasized that his NAVPLAN is meant to show Congress the Navy’s “warfighting requirements,” whereas the formal 30-year shipbuilding plan is the venue to take industrial base capacity and the government’s budget into account.

“Let’s separate requirements from the shipbuilding plan,” he said. “The shipbuilding plan is further informed by … the capacity of the defense industrial base as well as the caveat that in order to deliver, let’s say, 355 manned ships in the composition that we’ve laid out in the NAVPLAN in the late 2030s, [that] would require 3 to 5% real growth in the budget.”

“But the shipbuilding plan is informed by the requirements that we’re generating through my office,” he added.

Some of the platform numbers, labeled as “capacity goals,” are well known Navy ideals — inventory statistics that numerous Pentagon studies have confirmed as sufficient, but ones the service isn’t necessarily on track to achieve.

Those include 12 Columbia-class ballistic missile submarines, 66 Virginia-class attack submarines and 12 aircraft carriers. On amphibious ships, Gilday wrote the service’s goal is 31 amphibious assault vessels — a number poised to be codified in this year’s defense policy bill — and 18 Light Amphibious Warships.

In 2045, the Navy will need 96 large surface combatants and 56 small ones, according to the NAVPLAN, as well as “approximately” 150 unmanned surface and subsurface platforms “to increase the fleet’s capacity for distribution; expand our intelligence, surveillance, and reconnaissance advantage; add depth to our missile magazines; supplement logistics and enhance fleet survivability.”

Rounding off the fleet would be 82 combat logistics ships and auxiliary vessels as well as an unspecified amount of “expeditionary logistics” capabilities.

Also included in Gilday’s list are numbers not associated with the 30-year shipbuilding plan, such as “approximately” 1,300 fighters and other carrier-based aircraft, 900 anti-submarine and anti-surface warfare vehicles such as helicopters and patrol planes as well as 750 support aircraft.

Like nearly every other strategic document coming out of the Pentagon these days, the rhetoric in the CNO’s NAVPLAN heavily emphasizes the threat the US faces from China.

Hours before the document was made public, Rep. Rob Wittman, R-Va., while speaking at the Center for Strategic and International Studies, said the administration’s fiscal 2023 shipbuilding budget request “is counter to what their assertion is about what the US role should be in the South China Sea.”

“By any measure, China has much more capability than we have, we must modernize our Navy [and] we need to do it with a sense of urgency,” he said.

Rep. Mike Gallagher, R-Wisc., took to Twitter today to criticize the Navy for its constant number swapping following a POLITICO story that reported fierce in-fighting at the Pentagon over the Navy’s future fleet.

“The fact that Congress has received four different answers from the Navy in the past three months alone sparks confusion and ultimately, less effective advocacy,” he said.

Asked to comment on Gallagher’s criticism, Gilday said the NAVPLAN “is not a perpetual end state. It can’t be.”

He went on to cite the various experimentation efforts the Navy has ongoing in the Middle East and at the Rim of the Pacific exercise.

Exercises and experiments, such as those happening at RIMPAC, are “absolutely on an annual basis going to inform those assessments in terms of what we need,” he said. “If the numbers change from 355 to 370 — we’ve still got a ways to go before we get there.”

“And ye were now turned, and had done right…”