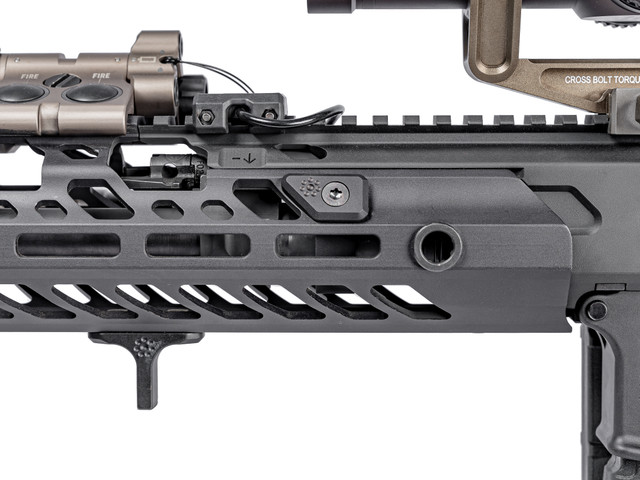 The SIG Sauer MCX Virtus has been an extremely configurable and popular 5.56 rifle that really scratches that itch for those who want something other than a standard AR-15. However, when it comes time to do maintenance on the Virtus, many users have complained that when shooting from a barrier or other supported position, the handguard would flex significantly causing your attached laser device to lose zero even when minor pressure is being applied. The new patent pending Arisaka Zero Retention Clamp (ZRC) greatly reduces zero shift to lasers and handguard mounted iron sights with this version being specifically designed for the MCX Virtus equipped with either the SIG Sauer SD handguard or Midwest Industries Suppressor M-LOK handguard.

The MCX Virtus handguard is secured to the receiver by a friction fit slot on each side near the extended receiver top rail and a single steel fitting held in place by the front takedown pin. This allows the handguard to flex significantly, causing a laser or front sight zero to change when minor pressure is applied to the handguard. A shift of 5 mils or more is possible by pushing on the handguard with your support hand while the rifle is shouldered. Additionally, the zero does not always return to it’s original position once pressure is removed from the handguard.

The ZRC clamps are contoured to provide minimal interference with the user’s hands while gripping the handguard. On the SIG Sauer SD handguard the clamps fit over the rhombus shaped vents, while on the Midwest Industries suppressor M-Lok handguard they occupy one M-Lok slot in the top row. Each clamp is labeled for the side and orientation, making installation easy. The Arisaka MCX ZRC is sold for a price of $49 from the Arisaka Defense store. It comes in a single color (black anodized) and is available for either the SIG Sauer SD Handguard or the Midwest Industries Suppressor M-LOK handguard. Let us know if you’ve experienced any flexing with your MCX Virtus handguard and if you think this might actually solve the problem for you down in the comments below.