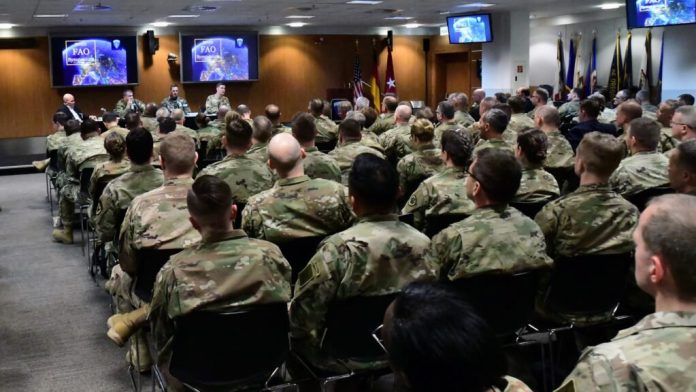 Driven by a Congressional requirement, the Defense Department plans to cut a number of general officer roles in the coming year. In this new op-ed, Jonathan Lord of the Center for a New American Security argues that the department risks making those cuts in the wrong place — by disproportionately hurting those rare foreign relations experts who have climbed the ladder inside the Pentagon.

The National Defense Strategy (NDS) emphasizes the need to continually strengthen and reinvigorate US partnerships and alliances. To succeed, the strategy implicitly requires US security assistance and cooperation to extend beyond the simple sale and delivery of hardware to partner militaries. Security cooperation must result in the development of lasting and sustainable military partner capacity — otherwise, the US military will perpetually be required to back-stop failing partner-militaries, diverting funds and effort from recovering readiness and lethality and preparing for future conflict in priority theaters.

Those engaging in security cooperation on behalf of Washington must be able to develop diplomatic and military relationships with foreign political and military leaders to have influence, drive often-necessary security sector reform, and advise and assist partner militaries in planning and procuring military training and equipment that meets security needs in a sustainable way. Embassy-based security cooperation offices (SCOs) struggle with these tasks under normal conditions. We have seen time and again what this looks like when it goes wrong: When defense ministries in need of reform are left to their own devices, institutional weakness and corruption ultimately produces hollow armies. In but one notable example, the United States spent billions of dollars to train and equip the Iraqi Security Forces, only for them to collapse before ISIS in 2014, requiring US military intervention that continues to this day.

To complete this challenging mission, which requires focusing partners on less-tangible, yet crucial aspects of military development (training, sustainment, logistics, planning, etc.), the Department of Defense should leverage the servicemembers best able to perform the job: Foreign Area Officers (FAOs), the only military professionals trained to perform defense ministry-level engagement and development with foreign allies and partners.

Unfortunately, at the very moment when FAOs should see increasing leadership roles in the department, critical defense diplomacy, general officer billets are facing the chopping block in a short-sighted decision by DoD leadership. The Pentagon, and the US as a whole, will be weaker for it.

Although FAOs spend as many as two decades of a full 30-year career performing this critical mission, very few of these officers are promoted into senior roles at the Pentagon, Combatant Command staffs, or general officer Senior Defense Official-Defense Attaché (SDO-DATT) roles in US embassies, where they can best manage and shape the United States’ bilateral security partnerships. To ensure that US security cooperation and security assistance makes a strategic and lasting impact, it is time for the Pentagon to begin a push to empower and promote FAOs into these positions of critical engagement with partner nations.

The FAO training and career path is designed to build the necessary knowledge, skills, and experience to represent the United States as SDO-DATTs in US diplomatic missions around the world. US Army FAOs are typically selected as senior Captains, having completed a successful assignment as a company commander, which identifies them as high-performing and makes their next promotion assured. FAOs then undergo three to five years of additional training and education: foreign language training at the Defense Language Institute, a one-year “internship” at a foreign embassy or other overseas location, a master’s degree from a graduate school with a validated graduate degree program, Command and General Staff College, Joint Military Attaché School, and the Security Cooperation Officer Course. FAOs are purpose-built for developing rapport with allies and partners and to assist them in creating capable and sustainable militaries that are interoperable with our own. However, because the military services have a tendency to prioritize and embrace officers from their core branches, FAOs are often overlooked for senior leadership and general officer roles in favor of officers with more traditional service backgrounds, like Air Force fighter pilots and Army combat arms officers. As a result, it is rare for a FAO to surpass the rank of O-6 — a Colonel in the Army, Air Force and Marines, or a Captain in the Navy.

While the DoD should be looking for ways to promote and empower FAOs, currently, the Pentagon is moving in the wrong direction. Not only has the military done nothing to promote FAOs into key roles, but to comply with past defense legislation reducing the number of general and flag officer billets across the military, DoD is considering a plan to cut all but four general officer SDO-DATT positions around the world by the end of this year.

While this legislation was meant to reduce the number of generals and admirals within what Congress considered to be a bloated Pentagon bureaucracy, the military services reflexively protected their own and recommended the cuts be taken elsewhere. By accepting the recommendations of the military services, which are unable to see beyond their internal priorities and cultures, the Pentagon is inadvertently undermining a core tenet of the NDS and a foundational leg of this administration’s foreign policy: the strengthening of partnerships and alliances.

In addition to the SDO-DATTs, the United States Security Coordinator for Israel and the Palestinian Authority (USSC) is slated for demotion as well. That job is currently filled by a three-star Army general who has played a crucial role in working with both Ramallah and Jerusalem, following the killing of Palestinian-American journalist Shireen Abu Akleh. The shuttle diplomacy required to tamp down tensions and coordinate security operations between Israel and the Palestinian Authority can only be successfully accomplished by a US military officer with the status and credibility to influence the most senior Israeli and Palestinian security officials. Dropping a field-grade officer into that role like an Army colonel or Navy captain is a recipe for failure, and the President’s recent trip to the region demonstrates that the stakes are just too high.

Defense Secretary Lloyd Austin should rethink the plan to downgrade these critical defense diplomacy positions, and the law provides him the offramp to due so. Section 501 of the Fiscal Year 2017 NDAA, which legislated the cuts, also includes a waiver authority for the secretary to preserve billets beyond the total allowed if it is in the national security interest. Instead of cutting the positions critical to defense diplomacy, the secretary should exercise the waiver, restore them, and direct the service chiefs to assign them to the servicemembers best trained to get the job done: FAOs.

In March 2021, Austin laid out his three priorities in his guidance to the force: “defending the nation, taking care of our people, and succeeding through teamwork.” By preserving these general officer positions that are critical to US partnerships and alliances, and by staffing them with FAOs, he would serve all three.

Jonathan Lord is the Senior Fellow and Director of the Middle East Security Program at the Center for a New American Security. He previously served as a Professional Staff Member on the House Armed Services Committee, Iraq Country Director in the Office of the Under Secretary of Defense for Policy, and as a Political-Military Analyst in the Department of Defense.