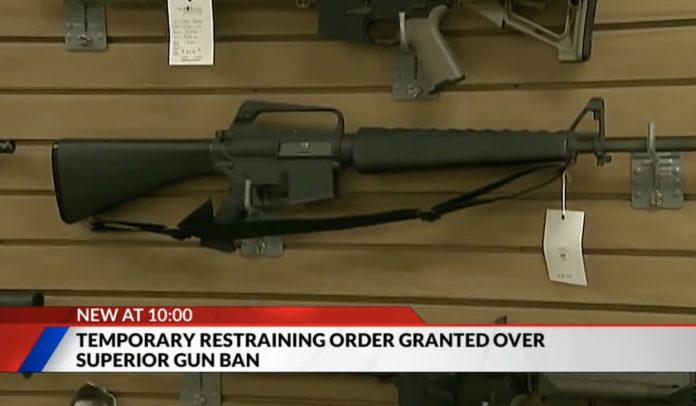 The town of Superior recently passed several gun control ordinances. The ordinances were passed under the authority of a recent law passed by state legislators (SB21-256) which allowed local governments to enact gun laws that are more restrictive than the state’s gun laws.

The new ordinances triggered a local gun-rights group, Rocky Mountain Gun Owners, to file a lawsuit against the town of Superior claiming that the ordinances violate the Second and Fourteenth Amendments.

In his decision, Judge Moore stated, “The Court is sympathetic to the Town’s stated reasoning. However, the Court is unaware of historical precedent that would permit a governmental entity to entirely ban a type of weapon that is commonly used by law-abiding citizens for lawful purposes, whether in an individual’s home or in public.”

Judge Moore did not grant a temporary restraining order against all of the ordinances, but limited his order to the ordinances that prohibited the possession or sale of “illegal weapons” (defined in the ordinance as “an assault weapon, large capacity magazine, rapid-fire trigger activator, blackjack, gas gun, metallic knuckles, gravity knife or switchblade knife.” Amended Code § 10-9-20.

The Judge also restrained Superior from enforcing an ordinance that required residents owning an assault weapon prior to July 1, 2022, to obtain a certificate for it in order to legally possess it.

“This is a massive win for gun rights in the state of Colorado,” Rhodes said in a press release.

“Today the judge affirmed what we already knew to be true — under the Second Amendment and the Bruen ruling, the Town of Superior doesn’t have a leg to stand on. Standard-capacity magazines and semi-automatic rifles are protected under the Second Amendment, and the U.S. Supreme Court has ruled that owning and carrying firearms is an individual right. Superior’s anti-gun ordinance is blatantly unconstitutional, and today the court agreed and gave us a restraining order against the Town of Superior to stop them from enforcing it,” Rhodes continued.