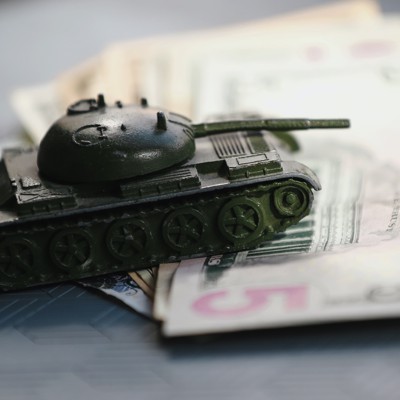 Despite an annual budget over three-quarters of a trillion dollars, money is always tight at the Defense Department. And the U.S. military is being paced and passed in terms of innovation and raw size. Call it the paradox of scarcity in a defense budget of largesse. (I did.) How did we get here? And can we escape?

The increasingly brittle force can be attributed, in large part, to the defense budget’s structure and the barnacles of bureaucracy that have built up and calcified over time. Blame can also be laid at the feet of lawmakers and defense leaders who failed to make difficult decisions over the past two decades.

About three-quarters of the defense budget is preordained: spending that is essentially on autopilot. This leaves precious little flexibility for meaningful change or truly strategic choices. Only 10 to 15 percent of the military’s budget is shifted around each year—resulting in little variation to change course and confront threats that vary in intensity, timetable, scope and more.

As with most all large organizations, the biggest expense on the Pentagon’s balance sheet is its professional workforce. In 2021, for example, the $720 billion defense budget included $300 billion for civilian and military pay and benefits. Annual salaries and benefits, to stay competitive and retain sufficient numbers as well as to confront inflationary pressures on servicemembers, rise above inflation annually regardless of whether the overall budget grows.

Similar trendlines exist within the operations and maintenance of equipment, which accounts for another 30 to 40 percent of the budget. As equipment ages, it gets more expensive to maintain—eventually, more expensive than just replacing it. But since procurement has largely become the “bill payer” for the people and old stuff that constantly increase and which inflation disproportionately affects, there is little money left to recapitalize fleets and inventories with modern technology, better composites, energy and battery storage, or more efficient chassis, airframes or hulls. This cycle of getting older and smaller just keeps going on rinse and repeat.

Under- or simply un-budgeted inflation only further fences more funds before policymakers act. For example, the Biden Pentagon planned the current 2022 budget to operate under 1.8 percent inflation, and the 2023 budget at 3.9 percent. This means the armed services lose between six to seven percent of their budget for two consecutive years, particularly in what they planned to buy now, and the servicemembers struggle to make ends meet.

Once the must-pay bills are funded, the defense budget remains on cruise control. Any topline growth above inflation pays for readiness, industrial base, or force-structure gaps created in downturn eras like the Budget Control Act decade. The $100 billion “Trump bump” in defense spending above Obama-era levels turned out to be more of a military repair than a Reagan-like rebuild.

Innovative concepts, such as the Marine Corps’ Force Design 2030, take the brunt of make-do-with-what-is-left mentality. After two budgets that failed to fully fund inflation and fact-of-life costs, Commandant of the Marine Corps Gen. David Berger has been forced to shed headquarters staffing by 15 percent and cut end strength and older systems without funds for new programs and projects that advance his effort. Last fall, Berger told lawmakers that that “we have wrung just about everything we can out of the Marine Corps internally…We’re at the limits of what I can do.” The Corps’ permanent divestments yielded not one penny for investments.

Add in the Defense Department’s sizable spending on “activities more appropriate to other departments,” as former Pentagon acting Comptroller Elaine McCusker calls it, and the defense bill becomes like a Christmas tree on which every pet project is hung.

The continuing resolutions endemic to the past decade-plus also contribute to waste. For just the U.S. Navy in 2018, a half-year spending freeze cost $6 billion in buying power—or the equivalent of three destroyers the service was unable to execute in real terms. This delay reduces funds for weapons, misaligns accounts, delays contract awards, creates uncertainty for companies to staff up, leads to duplication of effort, and generates higher costs of work.

Complacency concerning a bureaucracy on cruise control means that the budget will be unable to match the defense strategy. The fixed and fenced costs throughout the U.S. defense budget will prevent even the most well-intentioned Pentagon team from achieving better purchasing power for defense strategy outcomes.

The only branch with the power to break up this calcified system is one that has long been complicit in its sedimentation. Congress must take the reins and steer the Defense Department into immediate advancement of the National Defense Strategy by recognizing that where they are not spending is often where the military needs it the most: procurement.