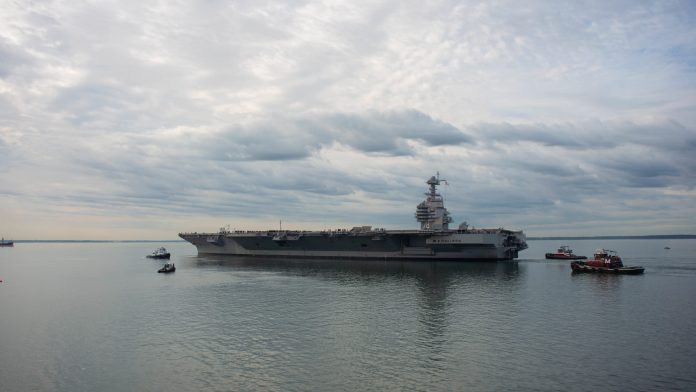 The repairs to the Virginia shipyard’s berths as well as upgrades to one of the dry docks is part of the Navy’s longstanding effort to revitalize its four public shipyards, dubbed the Shipyard Infrastructure Optimization Plan (SIOP).

Read a deep dive into the SIOP and the chances of a shipyard being built.

“The work to be performed provides for repairs to Berths 40 and 41 structural components by replacing deteriorated pile systems, cast-in-place concrete systems, pile caps, concrete beams, and fender pile systems,” according to an Aug. 3 Navy statement.

The statement added that the service received three offers for the work. However, the Defense Department does not routinely disclose the names of bidders who fail to win work.

“The award of this contract is a crucial step to ensuring that NNSY has the infrastructure needed to service future fleet platforms and demonstrates the importance of the SIOP program for the Navy,” the statement continued.

The SIOP, a $21 billion program laid out over two decades, aims to restore the dry docks and other infrastructure inside the public shipyards, make the facilities’ layouts more efficient for workers and refurbish old or broken equipment. The latest contract is one in a series the service’s lead agency for the project, Naval Facilities Engineering Systems Command, has made in recent years.

This week’s contract is important because it aims to restore the infrastructure needed for the Navy to service and maintain its newest class of aircraft carriers. The Navy in April tapped Bollinger Shipyards to refurbish two Virginia-class submarine dry docks at Portsmouth Naval Shipyard in Maine and picked 381 Constructors in August 2021 to “expand and reconfigure” a dry dock complex at the same shipyard.

Actions To Take Immediately After A Nuclear Blast