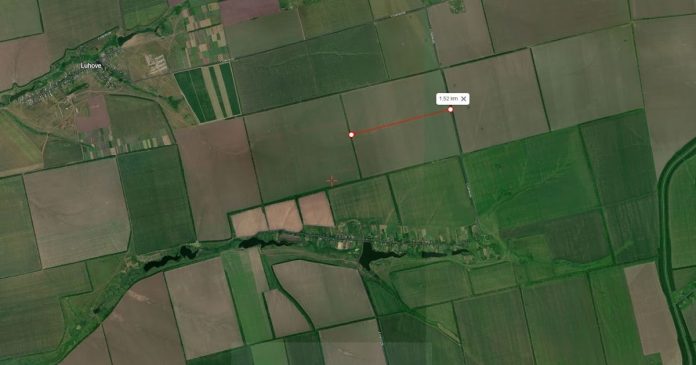 This screenshot shows a random, yet fairly representative area in Eastern Ukraine. You can enlarge it by clicking.

The fields are large, typical of Eastern European industrialised agriculture (a legacy of Soviet-era land reform). The monoculture fields are separated by treelines / hedgerows. The red line measures a distance between two such treelines; about 1.5 km. It would typically be anything from about 500 m to about 2 km (diagonally more).

An obvious conclusion is that ATGMs absolutely don’t need more than 2.5 km range unless you have a great vantage point (a roof) or a mast-mounted ATGM launcher and sensor. The line of sight is rarely if ever longer than that.

Infantry can either dig in in those fields (the treelines would not hide large trench networks and their roots are an obstacle to digging) for fairly well-protected real and decoy positions or you could use a more stealthy approach and hide in the treelines with likely less (not necessarily no) cover.

Such positions should be manned enough for full surveillance of the area of responsibility day and night, for maintaining radio and/or cable comms, for accurately and competently calling for indirect fires, for accurate single shots at dispersed infantrymen, for high volume of fire against large groups of infantrymen and for deterring armour action with effective anti-armour weapons. The idea is that they should be able to fend off weak probing attacks and scouts and protect themselves against infiltration attacks. The defenders should not be strong enough to defend against powerful attacks, for this would require and thus expose too many men to artillery fires (too high attrition). The forwardmost line should be a picket line.

In short, such a 1.5 km treeline should be occupied by at one or two not unusually large infantry platoons. This assumes a defence-in-depth front-line, of course. A single fire team, LRS team, sniper team or AFV crew (with vehicle) might satisfy in mobile warfare.

So what would such platoons do when they come under pre-planned artillery and mortar fires? The textbook answer* for holding ground is to fall back to a secondary position during the fires, and to return to the original position before the enemy reaches it with tanks and/or infantry. The textbook answer for delaying actions is to fall back as well, and prepare to fight in the secondary position, rinse repeat. Variations are possible and likely, but it’s fairly obvious that leaving a long-detected position in face of destructive fires is a smart, self-preserving move.

Yet how to do this? Infantry needs 10+ minutes for a 1.5 km cross-field run with equipment, more if the field has much vegetation. To run in the open exposes the infantry to spotting by aerial platforms that can see past the treelines.

The distance is too great to hide the moving infantry with smoke (and it takes too much munition to maintain smoke that blocks thermal cameras for long). The smoke might furthermore benefit an ongoing infantry & armour attack by the enemy and make it harder to get the timing for returning to the original treeline right.

Substantial entrenchments (cover, not necessarily fighting positions) every 200…300 m would help, but that would require much work for a long time, or expose much personnel to hostile artillery fires during construction.

Survivability could be enhanced by offering battlefield taxi service, such as by tracked armoured personnel carriers. The downside is that sending such vehicles into such a risky situation is materially unsustainable. Vehicle losses would occur frequently.

The APC would also need to hide fairly far forward (maybe 3 km back only, in range of even 120 mm mortars), which would expose it to detection, identification and finally to destruction by artillery, mortars or drones. So battlefield taxis sound like a solution for a brief conflict and for a long conflict with mass production of cheap and simple APCs only.

It appears that those forward troops need some kind of motorisation, preferably some motor vehicles that can be hidden very well, might be parked in shallow dugout for fragmentation-protection and should keep moving when perforated a bit.

The conclusion is thus that maybe this ‘line’ infantry on picket or platoon strongpoint duty requires either very compact motorcycles or ATVs or something akin to the original Jeep (a small 4×4 vehicle).

None of this would cope well with any form of trench or wire fence, so enough routes would need to be prepared, with marked gaps in such non-military obstacles. 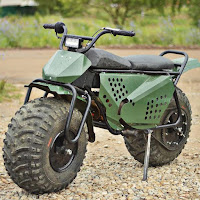 There are several models of compact 2×2 motorcycles with relatively little power, small diameter fat tires and modest top speed out there. The Rokon is the archetype. Their low weight and low weight would make them a good fit, but this is not a solution for having passengers in a stressful ride under fire. So this might at most suit very small teams, as you need one per man. These motorcycles should also not be considered a practical solution for self-deployment over long distances. Such motorcycles require no extra driving license (in Germany), the car driving license and a few training hours are enough (legally). 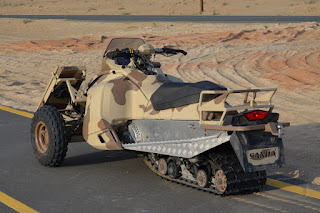 Next, let’s consider ATVs. The image shows an untypical ATV, as it is tracked similar to snowmobiles and it’s lightly armoured (though not much to the benefit of the users). Two men per vehicle seems optimistic, albeit possible. Again, routine self-deployability is limited to short distances (I’m thinking of less than 100 km, with this tracked one maybe less than 50 km). The vehicle is a lot harder to hide, certainly much harder to protect by giving it its own hull down dugout with ramp.

I understand that ATVs are popular with infantry, but I don’t feel that this is the way to go for the tactical problem of this topic. 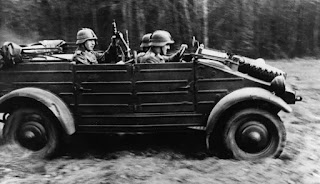 Finally, let’s ignore modern ergonomics milspec standards and remember that numerous cars have shown that 3.5 to 3.75 m length suffice for four seats. That does not offer much comfort for tall men on the rear seats, but it’s doable. A compact 4×4 vehicle of 3.75×1.6 m size could transport four men and the overall height could be as low as 1 m (with variable height suspension, when parked) while having enough ground clearance for offroad-driving.

This is vastly more promising than the aforementioned ‘fun vehicles’ because the ratio between driver and total men onboard is radically better. This enables to hide the vehicles not in the front row, but in the 2nd or 3rd treeline/hedgerow. A driver could then provide a battletaxi service for three men from the front row. The self-deployability seems better, albeit preferably with no more than two men onboard.

A question remains: Who is crazy enough to drive an open vehicle towards artillery fires?

A solution might be to delete the battletaxi driver. This boosts the passenger capacity by one per vehicle anyway. A self-driving (or optionally remotely piloted vehicle with self-driving as backup capability) could be hidden in relative safety in 2nd or 3rd row, be called forward without risking a driver’s life and then be used for moving 500 m…2 km where the men break contact and send the vehicles back where some other troops take care of them (hiding them again, updating their inertial navigation system and such). This does de facto preclude all two-wheeled vehicles, but ATVs, buggies and compact jeeps might work.

Such RPV/self-driving vehicles could also be used for casualty evacuation, for bringing supplies forward, for laying simple smoke walls (diesel fuel-evaporating smoke generator) and of course for routine exchange of crews between rear and forward positions. They might also be used to provide electric power as generators, to provide power for machinery to aid in preparing positions and more.

They would horribly extend any road march convoy with their low capacity per vehicle, though. An answer to that might be to transport them on logistic vehicles, which comes at a price, but also largely renders the self-deployability point moot.

Such unprotected or marginally protected vehicles would present less valuable targets than a real APC, would  be easier to hide (though also more numerous) and most importantly, they would be easier to replace. The latter is particularly true if one simply adapts existing civilian 4×4 cars by removing the roof and other parts.

the Ukrainians appear to suffer less than 200 KIA per day while under intense Russian fires. That’s actually a very low rate of attrition relative to the size of the country. Ukraine has millions of men fit for military service, maybe two million in a decent age for infantry. 70,000 KIA per year won’t bleed it white. So how do they do it? Are Russian fires actually survivable in the trenches (that was not the sentiment in 1944)? Are the Russians using creeping barrages that can be evaded? Are the Russians incapable of hitting infantry slowly evading on foot?

One thing is for sure; they suffer (relatively) tolerable attrition rates without any self-driving battletaxis.

*: A good historical study on this is here.

The SilencerCo Osprey Gets An Update; Silencer Hall Of FameThe Firearm Blog