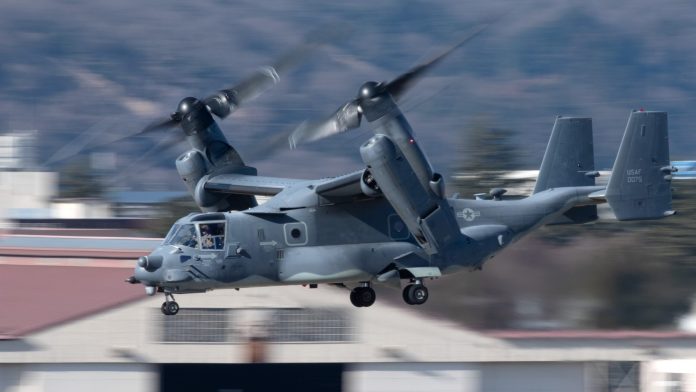 A CV-22 Osprey assigned to the 21st Special Operations Squadron takes off at Yokota Air Base, Japan, Jan. 8, 2021, during a training mission. (U.S. Air Force/Yasuo Osakabe)

WASHINGTON — Air Force Special Operations Command has grounded all 52 of its CV-22 Osprey tiltrotor aircraft indefinitely as the result of a “increased number of safety incidents” involving an unknown and potentially dangerous issue with the clutch, Breaking Defense has learned.

AFSOC Commander Lt. Gen. Jim Slife ordered the safety standdown on Tuesday in the wake of two safety incidents that had occurred over the past six weeks, with a total of four such events occurring since 2017, AFSOC spokeswoman Lt. Col. Becky Heyse said in a statement.

AFSOC describes the problem as a “hard clutch engagement.” Basically, the clutch inside a gearbox that connects one of the CV-22’s two Rolls-Royce Liberty AE1107C engines to the propeller rotor is slipping for an unknown reason, Heyse said. When that happens, the power load transfers nearly instantaneously to the other engine — a design feature that would allow the Osprey to keep flying even if one engine fails. Then, in most cases, the initial clutch re-engages, and the power load rapidly shifts back to the original propeller rotor and engine.

As a result of the rapid movement of power across engines, however, the aircrew is forced to land the CV-22 immediately, and Heyse added that “if the aircrew were unable to control the aircraft when the incident occurs, it could result in loss of control and uncontrolled landing of the aircraft.”

Heyse said the issue has not caused any injuries or deaths “due in large part to the skill and professionalism of our Air Commandos who operate the CV-22.”

“The safety of our Airmen is of the utmost importance, therefore no AFSOC CV-22s will fly until we will determine the cause of the hard clutch engagements and risk control measures are put in place,” she said.

In many cases, both gearboxes and engines require replacements after the incident — making them Class A mishaps with damage in excess of $2.5 million.

“In coordination with the Joint Program Office, AFSOC has been unable to gather enough engineering data analysis to accurately identify root cause, so it’s unknown if it’s mechanical, design, software or some combination of any of those,” Heyse said.

She said AFSOC staff would “work with the Joint Program Office and industry partners to fully understand this issue and develop risk control measures to mitigate the likelihood of catastrophic outcomes… Ultimately, the goal is to determine a viable, long-term materiel solution.”

The V-22 Osprey is the US military’s first tiltrotor aircraft, capable of taking off vertically and hovering like a helicopter as well as — after rotating its nacelles — flying forward at high-speeds like an airplane. Bell-Boeing builds three variants of the Osprey: the CV-22, which AFSOC declared operational in 2009; the Marine Corps’ MV-22; and the CMV-22B used by the Navy to fly supplies and personnel to aircraft carriers.

The V-22 has generated controversy over its 30 years of operations due to a history of a range of safety issues, which have sometimes led to crashes and fatalities. Recently, a March 2022 MV-22 crash in Norway resulted in the deaths of four Marines, while a June 2022 crash in California killed five. (A Marine Corps investigation found that the March crash was due to pilot error, according to the investigation report. A Marine official said at the time of the June crash that its cause was under investigation.) In late June the Marines ordered a brief safety standdown of all Marine Aircraft Wing units to review best practices and safety procedures.

The Marine Corps and Naval Air Systems Command, which runs the V-22 Joint Program Office under PMA-275, did not immediately respond to questions about whether the issue also impacts Marine Corps and Navy V-22s. Bell-Boeing deferred comment to the Defense Department. This report will be updated with additional information as it becomes available.