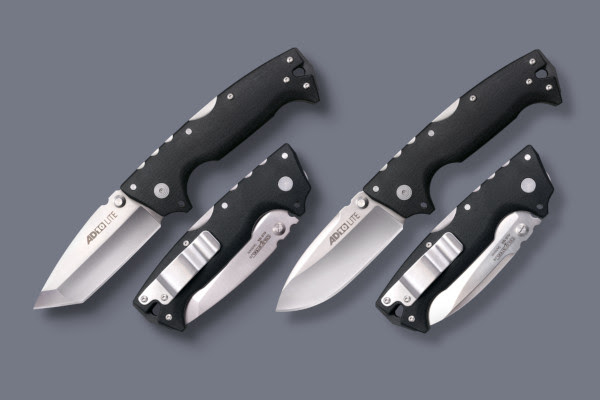 Cold Steel is proud to announce the addition of two new blade styles to their Trapper family of folding knives. The new Tanto and Drop Point blades will feature the same overall design as the original AD-10 but will have a more affordable price, and slightly less exotic construction materials, giving you a better balance for a hard-use daily carry knife. The two new Lite versions of the AD-10 have the same design and overall features as the original but are made with slightly less exotic materials including AUS-10 stainless steel for the blades and GFN for the handle scales. The result? 90% of the functionality at almost 50% less out of your pocket. The new AD-10 Lite folders are two of the best-value daily carry knives we offer.

The AD-10 Lite is the more economical versions of the AD-10 series folders. It shares most of the features, style, and high-performance potential of their more expensive counterparts, including our exclusive Tri-Ad® lock, blade configurations,
and steel thickness, but have been made from more affordable materials. For example, instead of costly G-10, the handles of the AD-10 Lites are made from less expensive GFN, and the blades are made from AUS 10A Stainless Steel rather than the S35VN that is used in the standard versions. They’re budget-friendly, razor sharp and ready for action. I like that Cold Steel has opted to create a more budget-friendly version of one of their more popular knives. If you’re interested in picking one of these up, both the Tanto and Drop Point versions of the AD-10 Lite are available for a price of $129.99. Each blade features a 3.5″ blade length, ambidextrous pocket/belt clip, Tri-Ad lock, an overall length of 8.8 -inches and weighs in at 6.4 ounces. For more information or to order visit http://coldsteel.com. TriggerCam 2.1: Record In Up To 4K Through Your Day Scope