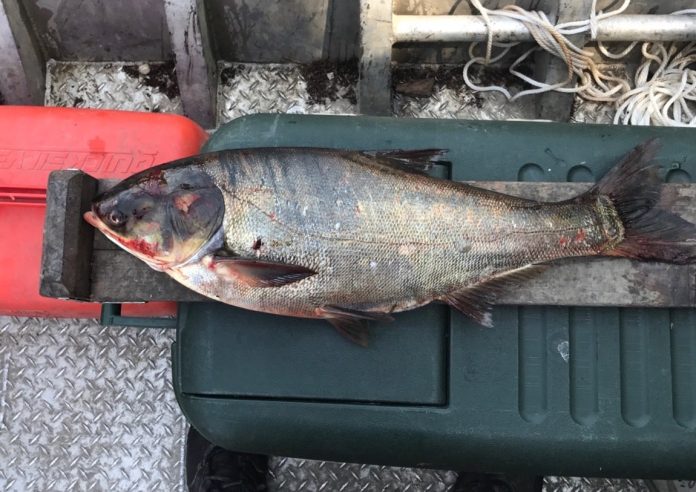 A 22-pound invasive silver carp was recently captured and removed from a neighborhood lake in Chicago—just 7 miles from Lake Michigan. According to a press release, the Illinois Department of Natural Resources (IDNR) and the U.S. Army Corps of Engineers undertook a removal at Lake Calumet after a member of the public alerted wildlife officials that a carp had been spotted in the lake.

Preventing invasive silver, bighead, and black carp from invading the Great Lakes is the focus of a nearly billion-dollar project that involves deploying an array of high-tech barriers, including an air-bubble curtain, an electric barrier, a flushing lock, and underwater acoustic fish deterrents. In January the Corps of Engineers dedicated $226 million for the Brandon Road Lock and Dam Project on the Des Plaines River near Joliet, Illinois, an important pinch point 50 miles downstream from Lake Michigan. That effort is expected to cost $858 million by its completion in 2030.

The Army Corps of Engineers also maintains two electric dispersal barriers on the Chicago Sanitary and Ship Canal at Romeoville, Illinois, which is about 37 miles downstream from Lake Michigan. The barriers, which are considered the largest of their kind in the world, maintain an electric field in the water to discourage carp from moving out of the Mississippi River drainage and into the lake. The recent carp removal in Chicago marks the third time that an invasive carp has been captured above those barriers since 2010.

“It is important to note that the capture of this silver carp does not indicate that a reproducing population of bighead and silver carp exists above the electric dispersal barriers or within the Great Lakes,” the IDNR said in its statement.

Teams used gill-netting and electrofishing to remove the 38-inch-long carp on August 4. Biologists plan to analyze the chemical makeup of the fish’s otoliths to try to determine where the fish has been living over the course of its lifespan, according to the Chicago Tribune. The IDNR is also working to determine if any more carp are in Lake Calumet, which drains into the Chicago Sanitary and Ship Canal, which is connected to Lake Michigan.

The 442-acre Lake Calumet is located on Chicago’s southeast side. It has been seriously degraded by industrial development and neglect. Earlier this year, the Chicago Metropolitan Agency for Planning issued a master plan that proposes reclaiming parts of Lake Calumet for recreation and wildlife.

Some more grizzly bear problems. The mauling death in Ovando…

How to Catch Midsummer Muskies