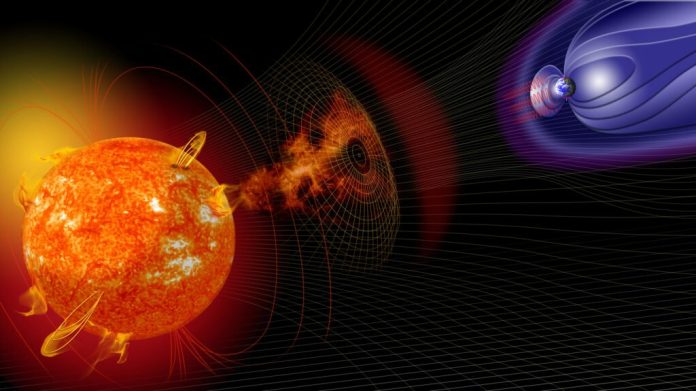 Artist illustration of events on the sun changing the conditions in Near-Earth space. (Image: NASA)

WASHINGTON — The National Oceanic and Atmospheric Administration is warning that solar activity could cause geomagnetic storms through the end of the week strong enough to trigger disruptions to GPS, communications satellites, and some military radios.

Such storms happen periodically as the sun’s activity (the solar cycle) waxes and wanes, and this particular round is not expected to be catastrophic. That said, there could be “moderate” impacts on Earth, with the worst case a G3 magnitude storm hitting on Thursday, NOAA said. G1 is the weakest and G5 the strongest storm level on the commonly used space weather scale.

The culprits are “Coronal Mass Ejections (CMEs)” — large explosions of plasma from the sun’s atmosphere, or corona — first detected Aug. 14. CMEs create their own magnetic fields that can slam into the Earth’s own magnetic field and wreak havoc. 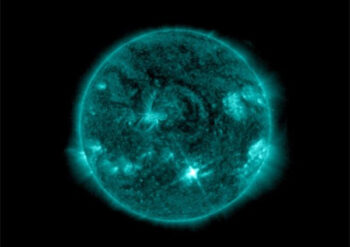 NOAA’s GOES-16 satellite captured an eruption from the Sun, the white area near the bottom and center of the image, on August 16, 2022. (Credit: NOAA)

During a G3-level storm, NOAA’s website explains, “surface charging may occur on satellite components, drag may increase on low-Earth-orbit satellites, and corrections may be needed for orientation problems.” In addition, such storms can create “intermittent satellite navigation and low-frequency radio navigation problems.”

In other words, the Global Positioning System satellite network and similar Global Navigation Satellite Systems (GNSS) used for positioning, navigation and timing could be disrupted. However, one NASA expert explained that GPS actually is “protected pretty well from solar geomagnetic storms within the area it operates,” noting that the “primary concern is electrons in that area degrading solar panels.”

The US military, particularly the Army, use HF radios for ground-to-ground and ground-to-air communications, including over the horizon. Civil government search and rescue operations around the world also often use HF radios.

“It’s hard to definitely say what the impacts might be for the three days of the storm,” one expert who consults for the US government told Breaking Defense. “Categorically, the upper atmosphere will be affected and atmospheric drag will increase. That means that LEO [Low Earth Orbit] debris, including inactive satellites, may reenter at a higher rate for a period of time.”

That would actually be a positive outcome, given that the growth of space debris in LEO is a serious concern for space operators.

Further, depending on how severe the storms are, “commercial over-the-pole air travel could be affected because of GNSS and communications outages.” However, the expert added, major airlines “all have staff meteorologists and space weather experts” who decide whether it is safer to fly at lower latitudes “and stop for gas somewhere.”

NOAA’s space weather center also is keeping an eye on a region of sunspots, where solar flares have reached levels that could cause “moderate radio blackouts” for tens of minutes on the sunlit side of the Earth. Low frequency navigation signals used by maritime and general aviation systems could be similarly affected over the rest of the week.

Solar flares are different than CMEs, although they often happen at the same time. They are intense bursts of radiation, similar to that created in a nuclear weapons blast, which cause an electromagnetic pulse (EMP).

Besides affecting GPS and HF radios, those EMPs sometimes also are strong enough to fry unprotected electronic systems on satellites. While most military satellites are radiation hardened for just that reason, most commercial communications satellites are not.

On the positive side, the geomagnetic storms could create an a rare spectacle for many skywatchers by pushing the Earth’s colorful aurora further south from its usual position over the poles.

“Auroras for this storm may be visible, if the weather conditions are favorable, as far south as Pennsylvania to Iowa to Oregon,” NOAA said.