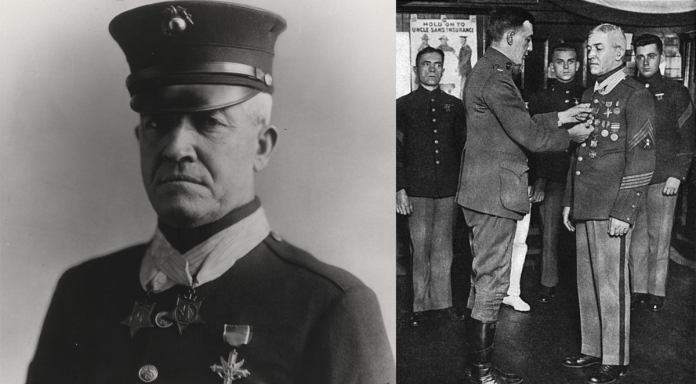 Born to a poor family in 1873, Dan Daly spent his youth selling newspapers to help his family make ends meet. He was a scrapper and became very adept at boxing during that time.

It was only fitting that when he joined the Marines at the ripe age of 16, he was shipped off to China during the Boxer Rebellion.

The Boxer Fights the Boxers

In 1900 the Boxers were going throughout China murdering anyone associated with foreign countries.

This led to the compound where foreign embassies in Peking (now Beijing) were located being placed under a state of siege for 55 days by the Boxers.

The siege was too much for the defenders, however. The German Marines in the area were soon overrun, leaving a single U.S. Marine behind to fight off the enemy. That Marine? You guessed it, Dan Daly.

Throughout the course of the night, Daly protected the compound with his machine gun, coming under heavy sniper fire for hours.

By the time the sun rose, 200 Boxers lay dead. For this, he was awarded his first Medal of Honor.

From Sea to Shining Sea

After fighting off the Pacific Ocean, Daly found himself fighting in the Caribbean 15 years later. The Cacos were rebelling in Hait, and Daly was attached to a group of 38 men attempting to ford a river late at night.

While in the midst of the river, the area erupted in gunfire. The men walked right into a three-sided ambush, manned by 400 Cacos. In the chaos, the Marines’ machine gun was dropped in the river.

The Marines pushed forward to take a position to fight back, but they knew the importance of possessing a machine gun to survive.

Daly volunteered. Running into the middle of the river alone. Daly found and picked up the machine gun and its ammunition, bringing it back to the Marine position.

He then led one prong of a three-pronged counterattack against the ambushers — and succeeded.

His prong alone killed 75 of the Cacos, the enemy was driven back, and the Marines managed to live. It was 38 versus 400 at night in an ambush, yet not only did they live, but they also won.

A second Medal of Honor soon found its way to Daly’s chest, making him one of only 19 Americans that had ever received two.

At 44 years old, Daly wasn’t finished. World War I raged and he found himself once more at the front. It was June 1918 at The Battle of Belleau Wood.

Daley’s Marines were pinned down by heavy artillery fire, but to remain put was suicide. They had to move forward, and Daly was a man that led by example.

Rising out of the trenches, Daly shouted to his fellow Marines, “Come on you sons of b-, do you want to live forever?!” Then, taking a few grenades and his .45 pistol, Daly single-handedly took out a German machine gun nest.

A third Medal of Honor almost found its way to his chest, but it was decided that the limit on Medals of Honor was two.

Vital Medications You Should Be Stockpiling