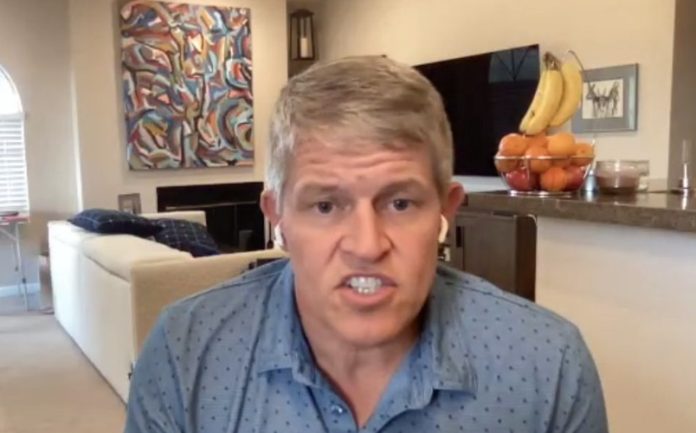 Chipman says he would usually order pizzas for meetings like this when they’re in-person, and if this meeting was in-person, he would need a lot of pizzas pic.twitter.com/kGUot9rfBf

David Chipman squirmed when the U.S. Senate Judiciary Committee grilled him for an “assault weapon” definition. The gun control lobbyist nominated by President Joe Biden to become the Director of the Bureau of Alcohol, Tobacco, Firearms and Explosives (ATF) just couldn’t bring himself to come up with one.

“There’s no way I could define an assault weapon,” Chipman finally said.

Nearly a year after President Biden withdrew Chipman’s nomination, he’s found a way. Of course, it was for a webinar hosted by the gun control groups Everytown for Gun Safety and March for Our Lives. The groups hosted a “Firearms 101” where the former ATF-agent-turned gun control advocate attempted to educate the uninitiated on the evils of certain guns, why they should be strictly regulated and of course how NSSF is keeping gun control from enacting his extreme gun-grabbing agenda.

It was NSSF that worked to block Chipman’s nomination. Putting him in charge of the ATF would have been no better than “hiring a militant vegan to be head chef at a Brazilian steakhouse,” as Sen. Tom Cotton (R-Ark.) explained it.

This much is clear. NSSF is living rent-free in Chipman’s head.

Just hours before going live with the webinar, Everytown for Gun Safety issued a “Terms of Participation” Agreement. They wanted to talk about gun control. They just didn’t want anyone talking about them talking about gun control. That included not recording “any part of the Event unless Everytown provides express permission…” NSSF couldn’t agree to those terms and didn’t tune in. Luckily, Firearm Policy Coalition live-tweeted the entire thing.

The “terms” included a nondisclosure agreement, a liability release and “Safety and Security” release, indemnifying Everytown and the other groups. That means no one could hold Everytown responsible for “injury, illness, damages, costs, claims or losses.” Gun control groups didn’t want to be held responsible for the misdeeds, or potentially criminal actions, of remote third parties.

Yet, that’s exactly what they want for the firearm industry when they push for the repeal of the Protection of Lawful Commerce in Arms Act (PLCAA). That’s the law that prevents frivolous lawsuits for the criminal actions of remote third parties – also known as criminals.

Chipman presented a slide show created when he was working for the Giffords gun control group. Using that, he admitted that the vaunted “assault weapon” isn’t the bogeyman gun control groups and politicians make it out to be. He confessed that criminals most often use handguns, without mentioning that those are ill-gotten, either through theft or bought and sold illegally on the black market.

He also admitted that Modern Sporting Rifles (MSRs), which he refers to as “assault weapons,” are less powerful than the average hunting rifle. However, he also claimed the ATF didn’t use them in raids because they were “considered too powerful.”

“Chipman says that hunting rifles can be more lethal than other guns because some animals are bigger than people, but they’re not made to kill a lot of people,” FPC tweeted.

Chipman said that magazines “turn normal guns onto killing machines,” FPC tweeted, and that people use the term “clip” because it rhymes better in rap songs.

He also admitted that MSRs and hunting rifles work the same way (that’s the function of a semiautomatic firearm – one trigger pull, one cartridge expended). Chipman cautioned on attempting to ban guns on looks alone, saying they instead should be restricted based on “lethality.” Later, though, he said firing a MSR without “barrel shrouds” 10 times “without it would melt your hand.” He added that the right to own one should be relative to where an individual lives, claiming that it’s different for someone in Montana versus someone in Chicago. Further, he claims gun rights don’t matter, since gun owners comprise about a third of the national population.

Chipman finally attempted defining “assault weapons,” explaining they are identical to military arms, except for the full-auto function. That’s a pretty big exception. He said rifle rounds leave “explosive-like wound in the body,” but admitted he didn’t ace Physics in school.

He still advocates that MSRs should be regulated under the 1934 National Firearms Act, the same way the ATF regulates automatic firearms, short-barrel rifles and shotguns and suppressors. That’s because Chipman believes MSRs, which he already explained are less powerful than most other hunting rifles, are more lethal than a “Thompson machine gun.”

Suppressors, according to Chipman, are something only “Seal Team Six would use.” That’s not what the data shows, though. The device that’s simply a muffler for a gun to reduce the firearm’s report to a level that doesn’t cause instant and permanent hearing loss is becoming more common. The American Suppressor Association reported that 2,664,775 suppressors were privately-owned as of September 2021. They’re legal for possession in 42 states and legal for hunting in 41 states.

Chipman took a few moments to direct his anger at NSSF. Turns out, he’s a little bitter that NSSF kept him from his dream job of running the ATF. Forget the fact he was woefully unqualified, a partisan hack or an activist bent on destroying a Constitutionally-protected industry. He said NSSF is “the most powerful lobby today,” and “they spent a lot of money to block his nomination.

NSSF spent some money, but not a lot.

He claimed “he was told by a moderate senator that he wasn’t confirmed because the gun industry didn’t endorse him.

It was different with Chipman. It wasn’t a matter of endorsement. NSSF outright opposed him. His “Firearms 101” webinar proves, once again, it was the right call.

Here’s How the Energy Crisis Will ACCELERATE the Food Crisis

What do you get when you combine a light and an antenna for Future Vertical Lift? Higher speeds with less weight and drag