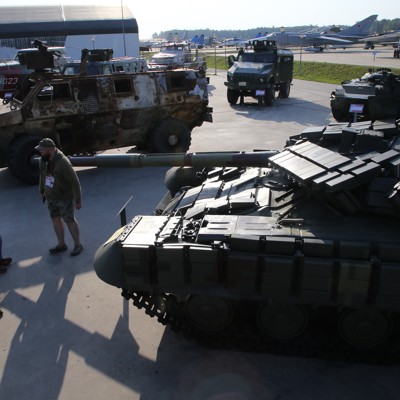 Russia hosted a major arms show outside of Moscow this week, where its leaders displayed weapons and laid out future plans for modernizing its military as it also searched for buyers amid a shrinking economy following Vladimir Putin’s invasion of Ukraine.

Nearly six months into the war, it showed off Ukrainian weapons and equipment that the Russian Defense Ministry claims were taken from the battlefield. Getty Images published pictures of tanks, armored vehicles, boats, and missiles on display, including one of an American-made Humvee.

The language used by Russian officials was very similar to what we hear from Western officials. Putin even referenced “dual-use products”—essentially technology that could benefit both the military and commercial sectors. “We are ready to offer our allies and partners the most modern types of weapons, from small arms to armored vehicles and artillery, military aviation, and unmanned aerial vehicles,” he said Monday.

Remember, Russia’s commercial aviation sector has been hit hard by Western sanctions. With no access to American- or European-made parts, the Russian airlines have started cannibalizing aircraft to keep some Boeing and Airbus planes in the air. Russia was banned from participating at the Farnborough Air Show this year following its invasion of Ukraine.

“Russian [ministry of defense] discussed such an effort more than a year ago, as it seeks to consolidate and better manage different AI-related R&D across its departments, research institutions and defense-industrial corporations,” Bendett tweeted. “In that sense, it may have functions similar to the DoD’s [Joint Artificial Intelligence Center] but probably with more direct oversight over actual work and, most importantly, budgets and financing. Given how important AI (and robotics) is to the Russian MOD today, this department may be central in crafting policies and directing actual work.”

Here are some more pictures from the Moscow arms show.

Back in the United States, American Rheinmetall Vehicles and GM Defense have teamed up to compete for the U.S. Army’s $5 billion Common Tactical Truck program. Germany’s Rheinmetall has been expanding its presence in the U.S. and creating partnerships with American companies as it looks to compete for Army projects. The Army is expected to award contracts for multiple prototype vehicles in December. In 2020, the Army chose GM Defense to build more than 1,000 small troop transports. It was the company’s first major Pentagon deal since declaring in 2017 that it wanted to disrupt the military truck market.

In other military vehicle news, the Marine Corps awarded BAE Systems an $88 million contract to “build multiple ACV-30 Production Representative Test Vehicles” that will be used for testing.

Hedge Fund Elliott Investment Management has taken a stake in Aerojet Rocketdyne, the rocket manufacturer that’s had a turbulent year after the Federal Trade Commission blocked its sale to Lockheed Martin. Bloomberg reports the group has taken a 3.7 percent stake in Aerojet.

The effort to replenish depleted Russian forces blurs the line between civilians and military combatants.

The White House-backed compact is also part of an effort to make supply chains more resilient.

House committee chairs ask intel-community chief how badly national security could be hurt by the information in the recovered documents.

Qin Gang is setting himself up as the unflinching mouthpiece of an assertive Beijing. Can he win over Washington?