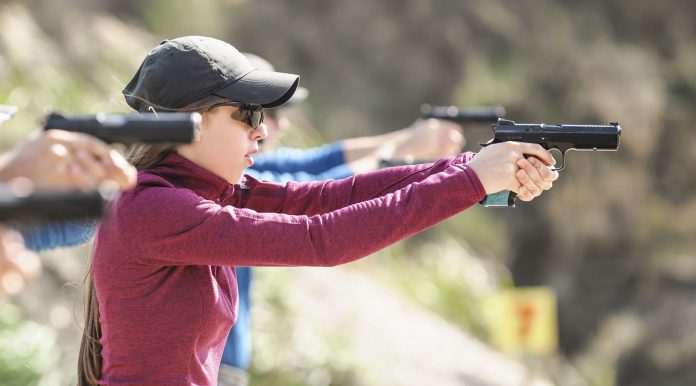 We’ll be amplifying the voices of responsible gun owners all week. How to participate:

1️⃣ Follow the hashtag
2️⃣ To join them, text GUN OWNER to 34131
3️⃣ Learn more about gun owners’ role in the movement: https://t.co/MJsAiWMaAf

That’s right, the Giffords civilian disarmament operation has unilaterally declared this Gun Owners for Safety Week and are using it to push their message of gun control under the guise of “gun safety” and “standing up to the gun lobby.”

So, in the spirit of Gun Owners For Safety Week, I think we need to amplify responsible gun ownership, too. That’s always a good idea. If you aren’t already familiar with them, here are the four rules of gun safety that every gun owner should know and practice.

But we all know that groups like Giffords aren’t really concerned about actual firearm safety as much as as they are control those who own guns. Even if every single armed citizen was the very model of gun safety, never doing anything even remotely questionable and only using firearms outside of a range for and clear-cut cases of self defense, that still wouldn’t satisfy them.

GiffordsCourage: “I’ve been hunting my whole life. It is the responsibility of gun owners to practice responsible gun ownership.” —@Carol_Lastowka, Pennsylvania #GunOwnersForSafety

The real goal here, of course, is to push and pass restrictive laws — think: universal background checks, gun owners licensing, waiting periods and “safe storage” mandates — to the point where lawfully-possessed guns aren’t only mostly useless for armed self-defense, but are utterly worthless against a tyrannical government, too.

Reducing their usefulness as defensive tools against the kind of criminals the average citizen is likely to encounter is just a happy side effect of their real objective: making life safer for illiberal governments and their enforcers.

But they know we know this. They’re not trying to change our minds here. They want the general public — the majority who don’t know much about the issues surrounding firearms and gun rights — to rethink what “safety” is. Instead of being about the practices an individual should adopt for basic firearm safety, they want people to think that “gun safety” comes from the imposition of “commonsense” gun control laws.

They want John and Jane Q. Public to think that gun owners don’t give a damn about safety, when precisely the opposite is the truth. We all started out dumb about guns at some point and were corrected by a parent, an instructor, a range safety officer, or a mentor. Some of us have had worse experiences that woke us up. But the general public hasn’t had that experience. They don’t know (and don’t want others to know) how seriously safety is taken as a normal part of the gun culture.

That’s why a lack of basic, fundamental gun safety practices isn’t tolerated in the gun-owning community.

To spread that message even further, we need to be reminding people of three things:

What Real Gun Safety Is

That’s why, long ago, various groups of firearm owners and gun-carrying professionals came up with safety rules which we’re all expected to know and practice. While the exact wording differs, the Four Rules cover things really well . . .

If you take any basic class given by a reputable instructor, you will start off with gun safety before ever going to the range. Beyond what’s contained in the Four Rules (or the NRA’s 3 rules, if that’s what you learned), there are other safety considerations to know including . . . .

As a community, we take these rules seriously. To be told by gun control advocacy operations — of all people — that they’re the ones who really care about firearm safety is not only false, it’s downright insulting. We need to make sure everyone hears this.