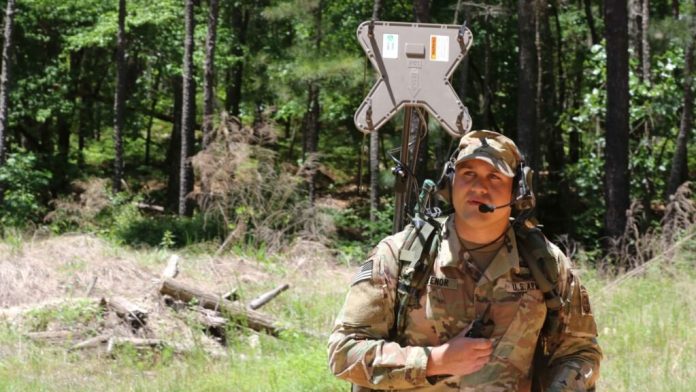 A U.S. Army is in the midst of modernizing its arsenal of electronic warfare programs. (U.S. Army photo by Pvt. Chantel Green)

WASHINGTON — The US Army has awarded Lockheed Martin and General Dynamics Mission Systems contracts to kick off the first phase of a major electronic warfare program, the Terrestrial Layer System-Echelons Above Brigade, the program office announced today.

TLS-EAB will give Army formations larger than brigades new, longer-range electronic warfare systems, an important capability as it seeks to both develop new long-range fires systems and to modernize a long-neglected electronic warfare toolset. The final design is expected to be truck-mounted, with an eye towards serving as a long-range sensing and jamming platform that will help Army leaders fight across the far distances of the Pacific.

Lockheed and General Dynamics will share a $15 million other transaction agreements contract for the first phase of the program, which will last 11 months. Under that first phase, the companies will participate in a competitive developmental process, according to the press release from Program Executive Office for Intelligence, Electronic Warfare and Sensors, which manages the program. That will include “concept design, system design review and a software architecture demonstration.”

The TLS-EAB platform will improve the service’s information superiority, targeting and long-range fires capabilities on the battlefield, a critical piece for joint all-domain operations, according to the PEO IEW&S website.

Today’s award is the first of five phases, according to an Army spokesperson. The second phase will be prototype build, test and integration; the third phase will examine production readiness and operational assessment; the fourth phase will see the Army equip and transition to a follow-on program; and the final phase will be the design and development of future material solutions. The total value of the OTA across the five phases is about $163 million, the release states.

In an interview with Breaking Defense earlier this year, Strayer said the final timeline for the program was dependent “on what our two competitive offers propose and what the Army decides they actually want to go out and prototype.”

PEO IEW&S also recently awarded a contract to Lockheed Martin for the development of a brigade-level electronic warfare program, called TLS-Brigade Combat Team. TLS-BCT includes a suite of sensors that will mount onto vehicles and provide improved situational awareness, force protection capabilities, as well as offensive EW and cyber tools.

“Coupled with the TLS Brigade Combat Team (TLS BCT) system, Soldiers at all levels
will have the ability to support Multi-Domain Operations with EW situational awareness and affects options,” Strayer said in a statement.

One More Time for All the New York Politicians – It’s the Criminals, Not the Guns