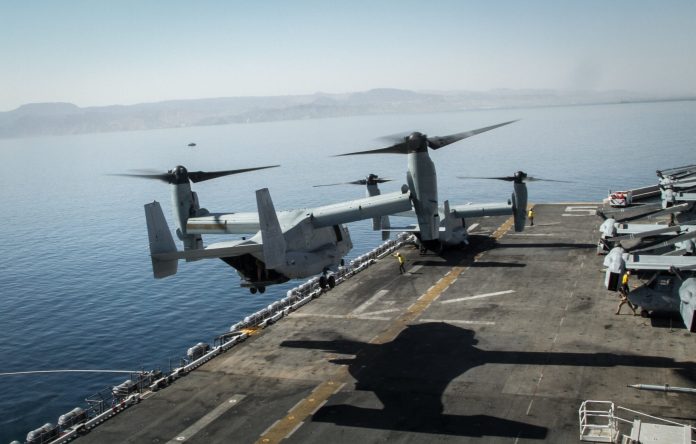 WASHINGTON — In the wake of the Air Force grounding its CV-22 Osprey fleet over a safety concern, the Marine Corps’ top aviator said the Corps will not be following suit for its MV-22s, saying the Corps has been well aware of the issue for more than a decade. He is instead issuing guidance on how to reduce the likelihood of the problem occurring.

“The hard clutch issue has been known to the Marine Corps since 2010, and as such, we have trained our pilots to react with the appropriate emergency control measures should the issue arise during flight,” according to a statement the service published today. “We also remain engaged with the joint program office, NAVAIR engineering, and our industry partners to resolve the issue at the root cause.”

Breaking Defense first reported on Wednesday that Air Force Special Operations Command had grounded all 52 of its CV-22 Ospreys due to an “increased number of safety incidents” involving an issue with the aircraft’s clutch, including two incidents in within the past six weeks.

A Marine Corps official told reporters the service has been training its pilots on how to deal with the clutch issue since first discovering it in 2010. The official said since that time, the V-22 program — meaning the Navy, Marine Corps and Air Force variants — have only recorded 15 incidents, and 10 of those incidents involved the Marines. None of the 15 incidents occurred on the Navy’s CMV-22 variant.

The military characterizes aviation mishaps by “classes,” with each class representing specific injuries to the pilots and a dollar amount tied to the damage inflicted to the aircraft. The Marine Corps official could not immediately provide a breakdown of the 15 incidents based on class, but did say none were “Class A” — the most severe rating associated with the loss of life. They added that none of the mishaps included a pilot being seriously harmed. (An AFSOC official previously told Breaking Defense that by their estimation, in many cases, both gearboxes and engines require replacements after the incident — making them Class A mishaps with damage in excess of $2.5 million.)

Today AFSOC said there had been no change in their decision to ground their V-22 fleet, which began Tuesday. When pressed about why the Marines Corps is not standing down its fleet despite the Air Force’s decision, the Marine Corps official stressed that the service’s pilots have been instructed — and new guidance being issued today will reinforce — on how to reduce the chances the issue will occur.

“We feel that we have the appropriate procedures in place to handle this emergency procedure in the event that it occurs again,” the Marine Corps official said. “Whether that’s tomorrow or a year from now, our crews will be trained to properly respond to this emergency and safely land the aircraft.”

That mitigation, which is emphasized in the deputy commandant’s guidance, includes the importance of doing a “hover check,” a maneuver where the pilot brings the aircraft just a few feet off the ground and “hovers” for a moment while checking their instruments.

“Over two-thirds of these occurrences have happened within seconds after takeoff. So by coming up into a hover-in-ground effect and monitoring your instruments prior to committing to forward flight, we’re reducing the exposure to this to this phenomenon of the clutch failure,” the official said.

The Marine Corps official declined to answer any questions related to materiel solutions for the aircraft and deferred those questions to the V-22 Joint Program Office.