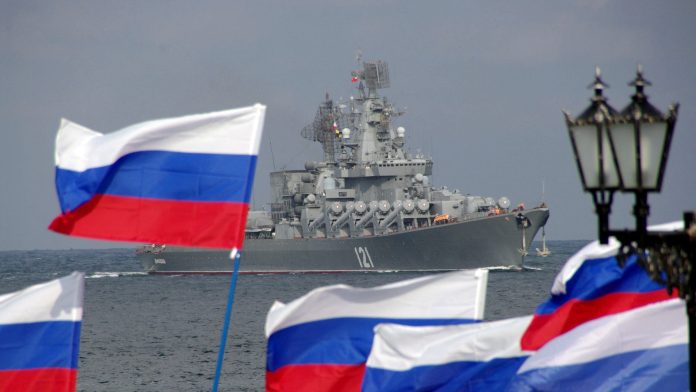 WASHINGTON — Russia’s new maritime doctrine signals its intent to challenge the United States and allies on the seas, but there is skepticism about the country’s ability to build a fleet capable of doing that given its limited options for shipyards and weakened supply chains, according to analysts.

Front and center of the new document, published July 31, is the Kremlin’s declaration that the US and NATO are among the “main challenges and threats to national security and sustainable development of the Russian Federation” with respect to the seas. It also indicates Russia will refocus its priorities from the Northern Fleet and North Atlantic to its Pacific Fleet, said Troy Bouffard, director of the Center for Arctic Security and Resilience at the University of Alaska Fairbanks.

“Now, out of the four [fleets], the Pacific Fleet is destined to become the lead naval force for Russia,” he said. “With this proposed Pacific pivot, Russia is strategically communicating its intent to challenge and compete with Western, as well as Asian, naval forces — including China.”

With that in mind, the doctrine deems the country’s shipbuilding capabilities a top priority.

“Availability of a modern and independent from external conjecture shipbuilding complex is one of the most important conditions for ensuring national security of the Russian Federation and its sustainable socio-economic development,” the document says, according to an English translation published online by Bouffard.

“The largest shipyards, the ones that were able to build those kinds of ships, were located in Ukraine in the Soviet days,” said Dmitry Gorenburg, a senior researcher from CNA, a US-based federally funded research and development center. “Depending on how the war goes, assuming they don’t actually take over Nikolaev, which seems unlikely at this point, they would have to build a new shipyard somewhere.”

Nikolaev port, located northeast of Odesa, is where the Moskva, a premiere Russian warship named for the country’s capital city and sunk by Ukraine’s military in April, was built. The port city is also where Ukraine’s own flag ship, the frigate Hetman Sahaidachny, was scuttled to keep the Russians from seizing it.

Gorenburg speculated that Russia’s far east may be an area of interest for a new shipyard given the vast amount of space as well as potential for “synergies with China,” but he added that it was not clear based on the new doctrine what the Kremlin’s intentions may be.

“But again, before you can build a ship you need to build a larger dry dock. That is going to take a lot of time,” he added.

Gorenburg also said that even before Western countries began levying heavy sanctions on Russia for its invasion of Ukraine, Russia had struggled with building surface ships. He cited production delays in the Admiral Gorshkov-class frigates as one example.

The sanctions, which limit many of the advanced components necessary to build warships, “is only going to make it worse,” he said.

Bouffard, the analyst from the University of Alaska, echoed Gorenburg’s sentiment, adding that Moscow’s new doctrine is “overly ambitious” and that Russia’s maritime investments for more than a decade have been concentrated on its submarines — potentially at the expense of its surface fleet.

“With sanctions, it’s very difficult to imagine how Russia can achieve the new goals, especially with regard to aircraft carriers and unmanned vessels,” he said.

Much like the United States, China and other countries though, traditional warships are only one part to the future fleet Russia wants to build. Another element that the country sees as critical are unmanned undersea and surface vehicles to improve its “situational awareness,” said Samuel Bendett, also a researcher at CNA who focuses on Russia and its military technologies.

“Russians see the development of unmanned systems as key to increasing their situational [and] informational awareness in the larger world ocean at a time when a confrontation may be a possibility with the United States and NATO,” he said.

Russia’s new doctrine cites unmanned and robotic technologies as important both for its navy as well as conducting marine research and safeguarding its maritime facilities.

Unlike aircraft carriers, unmanned vessels do not require large infrastructure to construct, and that means the Russians might have an easier time building them. Before the war in Ukraine, the Russian military claimed to have at least 17 unmanned maritime projects underway, which suggests Russian companies are also focused on the technology.

3/ A key priority is the development of marine robotic complexes and systems. Prior to the war in Ukraine, Russia had at least 17 different USV/UUV projects aimed at maritime exploration and ISR at different depths, some with military applications. pic.twitter.com/a3xuHWM7Uv

The country’s historical strength building submarines has led it to be more successful developing unmanned undersea vehicles rather than surface vessels, but it has not been able to implement them on a “massive scale,” as Bendett said Moscow previously hoped. Bendett characterized Russian efforts producing USVs as still “flailing around.”

The Russian navy previously imported a French USV but ultimately abandoned the technology due to complaints from sailors, Bendett said.

Given the state of international sanctions, if the country’s domestic sourcing for unmanned vehicles comes up as inadequate, importing technologies from France or other European nations right now is likely not an option for Russia.

“Contemporary naval capabilities heavily rely upon sophisticated technology — the kind of specialized tech that Russia lacks and cannot access due to targeted sanctions,” said Bouffard. “At the very least, progress will be significantly delayed since Russia will not likely accept anything but legitimately advanced developments.”

Bendett also said it is not clear how many of those 17 projects are advancing successfully or have simply floundered, but what is clear is that Russia sees the technology as necessary to advance its position as a global maritime player.

“Now, there are actually statements about [unmanned technology] in the maritime doctrine. So for the enterprises working on” unmanned vehicles, he said, “that’s the signal that they should be either paying attention to what the government is saying, or they should be investing more, or they should finally be producing results.”

House Democrats to move toward a vote on assault weapons ban

Dettelbach is Confirmed to Lead the ATF