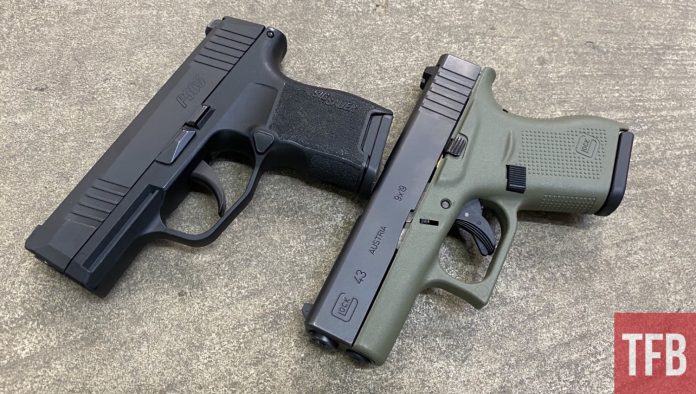 Welcome back to another installment of Concealed Carry Corner. Last week we talked about the realities of carrying in a vehicle and some of you had some interesting things to say in the comments.  A few people brought up the idea of ankle carry as a self-defense method. While ankle carry has some great applications, it may be tough to grab when you’re under stress in a vehicle. From that conversation, I started thinking about why certain people love the idea of ankle carry while others will admittedly fight against it no matter what. I started making a list in my head and ultimately said why not write an article about it. Let’s take a closer look at the truth about ankle carry.

The Idea Behind Ankle Carry

In concept, the idea of carrying a concealed firearm on your ankle seems like a sound one. It doesn’t crowd your waistline with a bulky firearm or uncomfortable holsters and gives you the freedom to move around unrestricted without the worry of brandishing your gun. With a properly fitted set of pants, it’s incredibly easy to conceal using an ankle holster. I’ve met a lot of people who swear by ankle holsters to the point where it’s the only style of carrying they will do. What it boils down to is having the most comfortable carry without being unarmed for most individuals who carry this way. Police officers are notorious for carrying a small little ankle piece in addition to their duty weapon. Over the years, there have been a number of examples of officers being put on their backs and the only thing to save their hide is pulling their ankle guns for protection. In this realm, an ankle makes a fair bit of sense just because of its location. With the amount of gear on an officer’s duty belt, the most logical place for a backup gun is somewhere that isn’t cluttered up with other gear. When it comes to firearms for ankle carry, the golden rule is carrying something small enough to carry comfortably on your ankle. One of the biggest mistakes I see people make who are new to the game is trying to shove a medium or large firearm on their leg and walk around like there’s nothing there. Not only will it throw your pacing off but it will just be downright uncomfortable after a while. Having something that fits your leg and has the least amount of weight will do you much better than a larger handgun. Now, we’ve certainly talked about some of the disadvantages of smaller carry guns in the past, but if you decide to ankle carry, you need to keep your carry gun as lightweight and small as humanly possible. It will make carrying immensely easier if you keep things small and simple. Certain guns like the Glock 42 and 43 are perfect semi-auto guns for ankle carry since their small and relatively light while offering decent capacity. A classic choice would be something like an airframe Smith in 38 special as well. Those would probably be the two easiest models to find holsters from whether its from Galco or other reputable manufacturers,

Although there are certain advantages for certain people when it comes to ankle carry, there are plenty of disadvantages to go along with it. The biggest issue when it comes to ankle carry is the fact it’s literally the furthest point you can carry a firearm on your body. the distance you need to cover in order to reach your firearm is by far the longest out of any draw stroke. This makes ankle carry hands down the slowest draw stroke out of any carry method which is the biggest drawback to it. I always had an issue with presenting the top of my head to an attacker in order to bend down and draw my firearm. Of course, with practice, this gets better, but I will be honest and say it takes a ton of work in order to become proficient with this method. For some of you, it may be worth it but personally, I stick to other methods like pocket carry if I decide to carry a really small framed firearm. My biggest gripe with ankle carry is just how slow it is to pull from concealment and what a distance it is to travel in a high-stress situation. If you decide to carry this way, just know you will need to practice a ton in order to become proficient so be prepared before attempting this carry style. I have personally tried almost every single carry method out there, and I will be honest with you guys and say ankle carrying is one of my least favorite ways of carrying out there. I would gladly take any other carry method including off-body carry before ankle carry, but I know others absolutely love it. For me, I would look at pocket carry as an alternative because it’s just as easy to carry a small gun without that huge amount of distance to cover in order to draw your gun. I know some of you may completely disagree but let’s be honest that’s nothing new with my articles when it comes to the TFB crowd. I just hope people see there are better ways of carrying than carrying a lug of metal on your ankle. I will be the first to say there are definite advantages in certain situations when talking about ankle carry. When it comes to police officers carrying a backup gun besides their duty gun, ankle carry makes complete sense. When it comes to the average Johnny going to the grocery store, not as much, but the ability to choose is what makes this country so great. I would advise trying other methods before ankle carry but if you’re carrying a backup, it’s a great choice.

Let me know what you guys think of ankle carry down in the comments below. I know some of you will be foaming out the mouth about this one and I encourage you to vent your frustration down below. If you have questions about carrying concealed or firearms in general, feel free to message me on Instagram @fridgeopeartor. Stay safe out there.