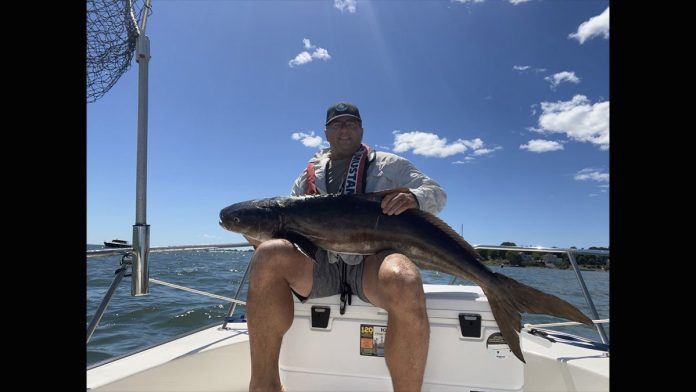 A hook-up so huge it snapped a rod is in line to be a new state record in Connecticut. It’s a 44-pound cobia, which aren’t typically caught so far north. USA Today reported how John Bertolasio caught the fish while using eel as bait in Long Island Sound. He fought the fish for 90 minutes, all the while suspecting he had a shark on the line.

“John didn’t know what he had caught until he sent the picture of the fish to a friend,” posted Connecticut Fish and Wildlife. “Once he found out it was legal, and good eating, he kept it.”

Connecticut state records list a cobia catch of 18 pounds in 2008—less than half the size of Bertolasio’s catch. But Bertolasio’s cobia won’t top the current world record. That belongs to Peter Goulding in Australia who caught a 135-pound cobia in Shark Bay in 1985.

Cobia are more common in warmer southern waters. But as ocean temperatures rise globally, NOAA reports southern fish have the opportunity to shift their movements farther north. Cobia are predatory fish that can grow up to 6 feet, can live up to 12 years, and can spawn several times in one season. They are often targeted off the coast of Florida and the Gulf of Mexico. Cobia are considered to be good table fare, which is why the commercial fishing industry harvested 131,000 pounds of cobia worth $430,000 in 2020. Sport fisherman collected 4.6 million pounds of cobia in the same year.