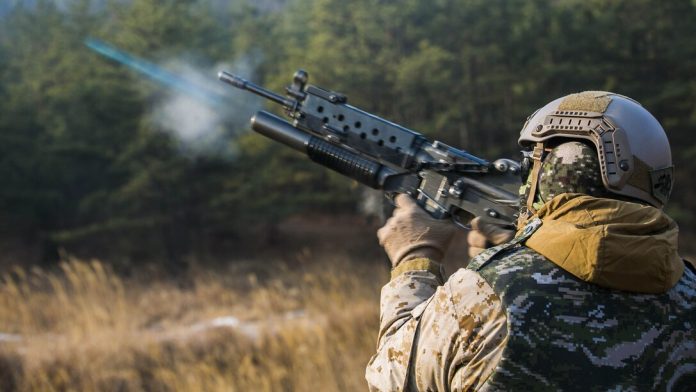 Our Photo Of The Day daily article series will take you to some very exciting and unusual places sometimes, not to mention showing you some unusual firearms. In 2015, during a Korean Marine Exchange Program in the Republic of Korea, U.S. Marines were given the unique opportunity to test out the Daewoo K2 assault rifle, the Daewoo K1 submachine gun, the K201 40mm grenade launcher and the Daewoo K14 sniper rifle. Above you can see U.S. Marine Cpl. Richard J. Bennaugh as he fires training rounds from a Daewoo K201 grenade launcher.

A Republic of Korea Marine zeroes his weapon before teaching U.S. Marines how to fire it. Zeroing the weapon, combined with the proper application of the fundamentals of marksmanship, allows for the rifle optics to align with the targets downrange. U.S. Marines also learned different characteristics of the weapon. The U.S. Marines are reconnaissance men with Alpha Company, 3rd Reconnaissance Battalion, 3rd Marine Division, III Marine Expeditionary Force. The ROK Marines are with 2nd Battalion, 2nd Marine Division. U.S. Marine Cpl. David A. Range fires rounds from a Daewoo K5 handgun into a target. For more details please check the source below.

Get to Know the Middle Tier of Awesome…Er, Acquisition

DIY Generator Ideas for Off/ Down Grid Scenarios