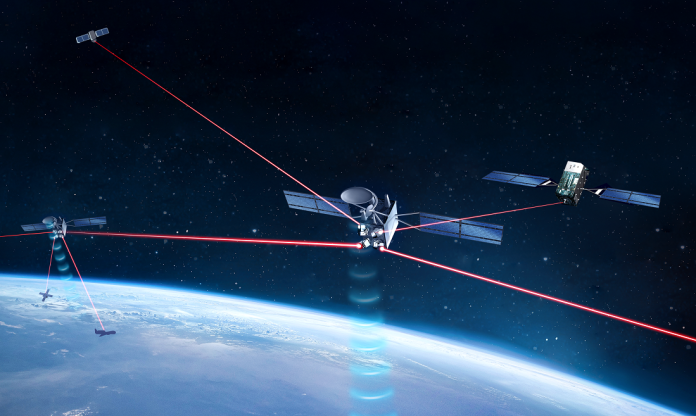 SpaceLink’s data relay constellation in Medium Earth Orbit will link to user satellites in other orbits, and transport data to ground stations in the US. (Artist’s concept courtesy SpaceLink)

WASHINGTON — Startup SpaceLink was among the 11 winners recently chosen by DARPA to develop pieces of its Space-BACN project to develop a “universal” on-board terminal for optical intersatellite links (OSILs). But the company’s plans are aimed far beyond — with the firm en route to launching a data relay constellation for both military and commercial customers.

“Our mission is to be able to put four SpaceLink satellites into Medium Earth Orbit,” said CEO David Bettinger. “We’re actually at 14,000 kilometers equatorial, so we’re around the equator. And from that vantage point, we can see any LEO [Low Earth Orbit] asset or above — MEO or GEO [Geosynchronous Orbit] — all the time.”

This would allow users to more rapidly bounce data from their satellites to the ground, by vectoring through one of SpaceLink’s satellites via OSILs.

And perhaps even more importantly for prospective national security customers, SpaceLink’s planned architecture would send that data back to ground to receiving stations based in California and Hawaii, which Bettinger explained helps protect it from prying eyes.

“We also are only landing data within the sovereign boundaries of the United States, which allows a natural security element of being able to not have our data, or our customers data more importantly, traverse undersea or foreign fiber optic cables, which is commonplace with the ground stations as a service paradigm today,” he said.

Initially SpaceLink’s ground-to-space communications would use radio frequency links (using the Q and V microwave bands for speedy connectivity), but as optical technology matures the company plans to convert to optical ground links.

SpaceLink’s concept is similar to the Space Development Agency’s Transport Layer of data relay satellites that the Defense Department has tapped to serve as a backbone for Joint All Domain Command and Control (JADC2).

“We are effectively a commercial MEO transport layer that is operating optically,” Bettinger said.

And indeed, company officials see their planned constellation serving as a complementary capability, aiding the Space Force’s current quest for space systems more resilient in the face of adversary attacks. To that end, SpaceLink plans to use on-board terminals based on the OSIL standards developed by SDA for its first operating version of the Transport Layer, called Tranche 1.

Jim Schwenke, vice president for business development, explained that SpaceLink has not yet been directly involved in any of SDA’s programs, but instead has held multiple conversations with SDA officials “about how we will be able to do some demonstrations and interoperate.”

Ultimately, he said, the goal is for SpaceLink’s constellation to be ready to augment or backup SDA’s own networks.

“If they have a challenge on one of their satellites, we can close the link —close their mesh back up,” he said. 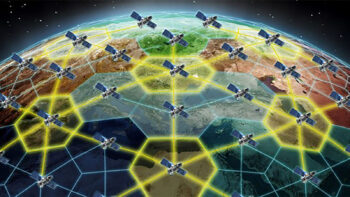 DARPA’s Space-BACN is aimed at a ‘universal’ optical satellite interlink terminal that can translate between incompatible satellite networks.

Cooking Up The Space-BACN

SpaceLink officials see the award under DARPA’s Space-BACN project, for Space-Based Adaptive Communications Node, as part and parcel of their mission plan — noting that DARPA and SDA are working closely together to develop affordable, reliable OSILs and terminals capable of using the myriad standards currently being used by industry.

SpaceLink, partnering with Parsons, was among the winning companies and teams for the project’s Technical Area 3, designed to develop command and control elements and software interfaces.

“We’re happy to participate on the third area with the other operators because it’s an area that we’ve been working on for two years now. And we have a lot to offer the DARPA program,” said Bettinger.

“SpaceLink will contribute its technical insights in the development of the application program interface (API) and algorithms,” the company elaborated in a press release today. “SpaceLink will also have the opportunity to support the simulation and testing that informs the deployment and utilization of Space-BACN reconfigurable optical communications terminals.”

It will be working alongside the other winners in Technical Area 3: SpaceX, Telesat, Viasat and Kuiper Government Solutions.

Other winners in the latest Space-BACN contracting round were, according to DARPA’s press release: