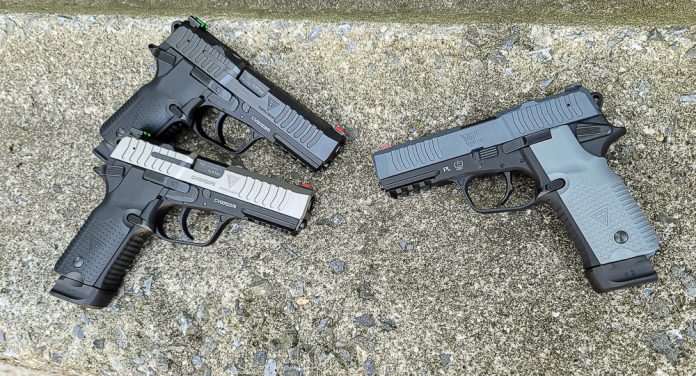 Two years ago, we reported that the Polish FB Radom VIS 100 M1 pistol had begun its red tape process of being imported into the United States. After a longer than expected journey, the VIS 100 M1 pistols finally arrived and are available through Arms of America, and Atlantic Firearms. For those that haven’t been following this pistol, the VIS 100 M1 is an optics-ready, fully ambidextrous, metal framed, double action/single action pistol, that’s an evolution beyond the Polish Army’s VIS 100 (no “M1”, previously known as the PR-15 or Ragun). Atlantic Firearm’s description and specs can be found below.

The FB Radom VIS 100 M1 is a semi-automatic pistol chambered in 9mm and made in Poland by Fabryka Broni. This is a Civilian legal full-sized pistol based on standard issue military VIS 100 issued to the Polish armed forces and police. The pistol was designed to blend the reliability of the military model with civilian friendly features. The FB Radom VIS 100 M1 pistols come in several different color schemes, such as the black slide with black frame, stainless slide with black frame, or the Cerakoted cobalt slide with black frame and grey grips. Each pistol will come with large and… less large grip panels, as well as two magazines with additional floor plates to increase the magazine’s capacity or for a lower profile. As mentioned, the VIS 100 M1 is optics-ready, and each pistol will come with an adapter plate that accommodates several different red dot sight profiles, such as Burris Fast Fire, Docter, Vortex Viper & Venom, EO Tech MRDS, Shield RMS, and JPoint.

The following video from Atlantic Firearms features Blaine and Matt, where they go over the options and features, and run a few magazines through a new VIS 100 M1.

Arms of America and Atlantic Firearms have priced each model equally, which is $939 for the standard Black, $1049 for the Cobalt, and $1149 for the Inox/Stainless model. You can find them at ArmsofAmerica.com, or AtlanticFirearms.com. We’ve been in communication with Atlantic Firearms since they listed the new VIS model on their website about getting a review copy, so stay tuned to TFB for that future review!

What do you think about the newly imported Polish VIS 100 M1 pistols?

Are Wolves Roaming the Woods of Upstate New York?

Gardening in a Post-Nuclear Fallout Environment, by Don Shift